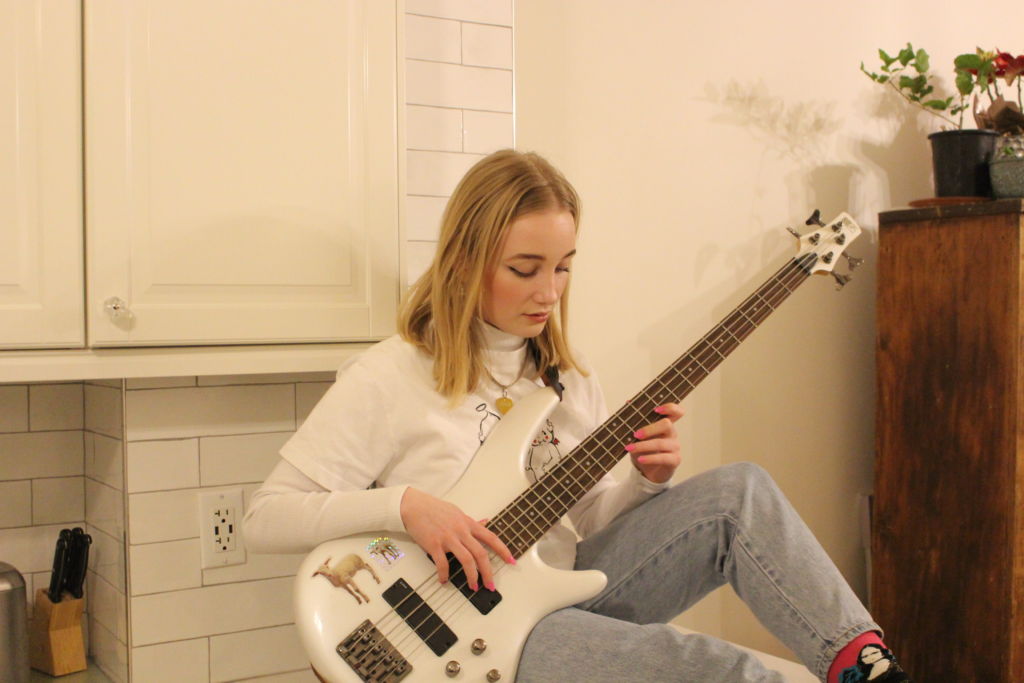 Zoë Argiropulos-Hunter is a 21-year-old student at the University of Ottawa who is making waves in the Ottawa music scene with her promotional organization, First Crush.

The name First Crush was inspired by the very reason she started this project, her love for the music scene she grew up in. Argiropulos-Hunter hosts a radio program under the same name at Carleton University’s station CKCU. She writes for a few publications including the New York-based magazine, Pink Things. This week, Glue caught up with Zoë to discuss First Crush and what drives her to do what she does.

What inspired you to create First Crush Promotions?

ZOË: I started going to shows in Ottawa when I was 14 and I fell in love with it because I felt connected to a community and people that like the same things as me. As I grew up with it, I joined some bands, went to shows and got more involved in the community. I wanted to replicate that feeling for younger people and to contribute to the scene that has given so much to me.

Can you run me through the process of booking shows?

ZOË: At first I would email bands and ask them if they were interested in playing a show in Ottawa and they’d either say sure or ask what Ottawa was. When I first started promoting, I would go to cafes like Pressed and Bar Robo because they’re not hard to fill up and I’ve played there before. It’s mostly reaching to bands, reaching out to venues, and understanding what kind of equipment bands will need. As time has moved on, bands are now reaching out to me which is something I never thought would happen. If you have a friend that books shows ask them how they do it, people in our community are so willing to help if you’re trying to get into music promotion.

How do you manage your time between running First Crush, going to school and having a social life?

ZOË: This is something that I myself wonder all the time and people ask me that a lot. I think what it comes down to is learning how to balance things in a way that feels natural. Learning how to say no is a really important part in managing your time. A lot of the things I do belong to the community but first and foremost they belong to me as well. Taking breaks is probably the most important thing I’ve learned how to do.

What do you hope to achieve with your organization?

ZOË: I was hoping to give back to the community. What I’ve learned over the year is the music circuit is such an important way to facilitate conversations around topics that I care about beyond art. I wanted First Crush to be a way for me to advocate for safe space practices. I’ve encountered issues with that and think It’s really important. Doing what I can to make a difference is what I’m hoping to do.

Tell me about your experience in the Ottawa music scene

ZOË: I started out when I was really young and moved into it very naively, just looking for a place to belong and I definitely found that. As I’ve gotten older, I’ve been able to see the scene for what it really is and see the problems that exist within it. I’ve learned to not be afraid to ask bigger questions and do what I can in the position of power that I have. Overall, I’d say my experience has been really positive. Ottawa is a really hard community to draw out to shows but when it does happen It’s so wonderful.

Do you think the music scene is inclusive? / what can YOU do to challenge that?

ZOË: The scene has struggled with inclusivity, whether that be a different kind of space or different kinds of artists. I think what promoters can do to be more inclusive would be to try to branch out and try to learn more. Don’t be afraid to explore and get out of your comfort zone. It’s also something that you have to do from an authentic point of view and not just to fill some quota or to parade your awareness of different identities. It has to come from a place that’s understanding of different communities and vulnerabilities.

Are you writing/making any music right now?

ZOË: In the summer, my friend Jake and I started a band called Deja Vu and he has since moved to Montreal for school. Long distance bands are difficult to coordinate, but we still talk about music and we have a long list of things to do that we will hopefully get to catch up on when we see each other next. For now, we’re taking a break but I’d like to pick it up again in the summer and play a show in Montreal.

ZOË: Seeing what ways I can contribute to an artist’s trajectory whether that be career-wise or creative wise. I know that my contribution as a promoter seems really small, but I’ve had artists reach out to me months after they’ve launched a project to say thank you or to tell me that what I’m doing is making a big difference. I know that Ottawa is a government city and It’s not necessarily a place to cultivate a creative career path but being the angsty baby that I am, I wanted to go against that.

What’s next for you?

ZOË: For the next little while I’m focusing on school, so I’m going to be taking a break from promotion. I’m moving into my fourth year of university so I’m hoping to focus on that and finish on time. Other than that, I want to focus more on my radio show and put out more writing content. Hopefully, I’ll do some bigger scale interviews with bands that I’d usually second guess my ability to contact but now that I have this under my belt, It feels like I can.