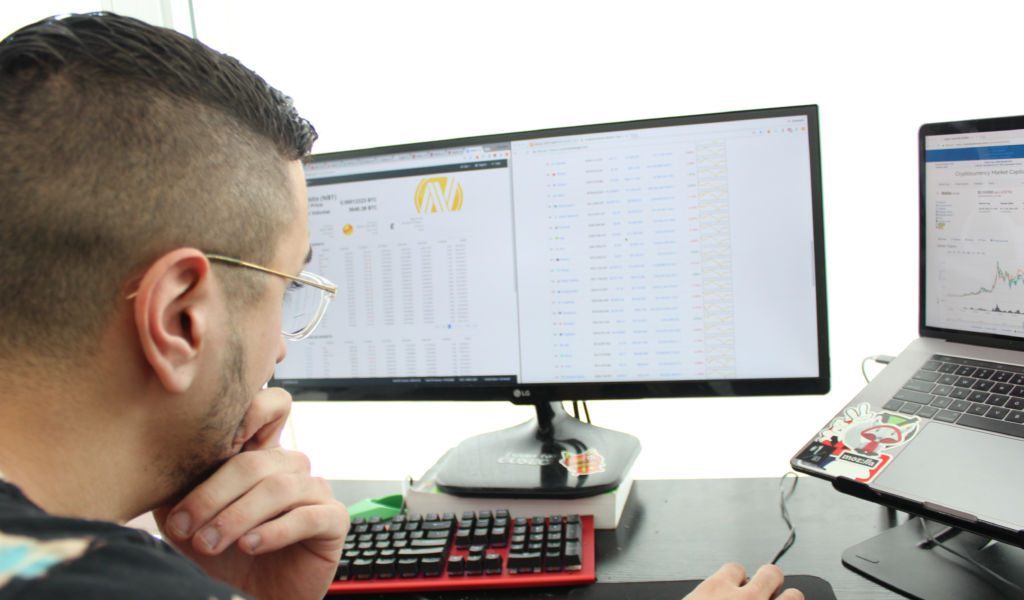 Sean Ghazazani used to be obsessed.

“You sit there refreshing it fucking 800 times a day,” the 23-year-old Carleton University computer science student says. “This isn’t something you can just close your eyes and kinda do, you need to be spamming it.”

This is typical behaviour for a new investor in the growing but volatile cryptocurrency market. You may have read about those who made fortunes off minimal cash through Bitcoin, or that Bitcoin is in a bubble and will make millions go broke in the future.

Nobody knows for sure what will happen, but it can happen overnight. That is why some people are constantly refreshing sites such as coinmarketcap.com to see if they have made or lost thousands while they were asleep or on the toilet.

Tech savvy students have taken notice and are bravely attempting to make their own fortune while student debt lingers above them.

“Facebook isn’t going to go from current market value to four-times market value overnight,” says Ghazazani. “But will the random Russian dude who made a faster algorithm than Bitcoin called Ethereum possibly go from five bucks to $1,100? It has.”

Ghazazani first discovered Bitcoin in 2012 while browsing Tor, an anonymous web browser for the popularized by the Silk Road. The Silk Road was a black market where in exchange for Bitcoin you could buy heroin, credit cards and even contract killers, among other things. With Silk Road in the news, he became curious about the currency technology instead, drawn in by its commitment to anonymity. To his memory, he purchased about 50 Bitcoins at about $5 each on a whim with his friends, to then sell at $25 soon after. He, of course, never expected it to turn into what it is today.

“Nobody knew, everyone who says they knew is a philosophical dickhead who thinks they can see the future,” he says. “If you knew why didn’t you sell your house and buy more? You knew right? No one knew for sure, everyone is just mad they didn’t buy more.

He never bought more Bitcoin, but has recently invested money into “altcoins.” Altcoins are newer cryptocurrency projects carrying a low value, leaving lots of room for potential growth. Many are made with real-world applications in mind such as FunFair; an altcoin with the aim to use blockchain technology to remove cheating from online gambling. But some use the hype in the market to make money from the greedy and gullible.

Bitcoin is the most well known cryptocurrency for being not only the first, but also the most valuable today. It grew from a price of $1 in early 2011, to over $20,000 in late 2017. In recent years, over a thousand cyptocurrency projects have popped up. Some, like Ethereum, have risen in value much like Bitcoin.

The goal behind Bitcoin, as stated in its whitepaper, is to put people in complete control of their assets. “A purely peer-to-peer version of electronic cash would allow online payments to be sent directly from one party to another without going through a financial institution,” it stated. Using an encryption technology, it also allows its users to remain relatively anonymous.

The anonymous nature of Bitcoin naturally made it popular with drug dealers and other black markets in the early years. But now it has gained widespread recognition for being a currency that holds value. If you hold Bitcoin, you can now withdraw cash from one of the dozen Bitcoin ATMs across Ottawa. But, its volatile price fluctuations, rising and falling by sometimes thousands of dollars in a day, raises some red flags for the cautious.

So there is risk in investing despite the buzz. Conventional wisdom says not to spend anything you are unable to lose. For Ghazazani, the time he is willing to lose money is now while he is young.

“This is probably the only time in my life I could lose $5,000 and not miss a diaper payment over it,” he says. “So I will always choose the riskier investment. Altcoins made more sense, but picking between them was literally picking numbers on a lottery card. Okay maybe a little better than a lottery card because you can look at the source code and whitepaper, so I think it is statistically one per cent better than the casino. If you understand software development you can make an educated guess.”

That is Ghazazni’s advice to those thinking about getting into investing in cryptocurrencies: do your research. Check the websites and news on the coin you are investing in and learn everything about it because there are pretenders out there. That philosophy has allowed Ghazazani to turn the $3,600 he has invested into $22,000 with investments into altcoins such as Verge and ReddCoin. But that was before the large dip the market took at the start of 2018, leaving him with $10,000 at the time of the interview. Still not bad for only three months.

Ghazazani’s goal is to be able to pay off his OSAP loans with his investments, ideally with some leftover for new toys. His interest in cryptocurrencies is currently focused on the investing aspect.

Perrault first came into contact with cryptocurrencies “to buy drugs.” He and a group of friends in 2012 discovered Bitcoin though Silk Road headlines as well. He saw it as a hobby. A way to anonymously make purchases online for things you don’t want to be seen buying.

“It was an experiment and a joke, nobody was taking it too seriously,” he says. Neither him or any of his friends held onto any coins when they were buying Bitcoin at $20 and $30. “When we saw it go to $1,000 we were kinda freaking out. Like, ‘holy shit we could have been millionaires.’”

He discussed Bitcoin in the early days with other people on message boards such as 4chan’s technology board. He described it as a bunch of nerds in basements making memes, poking fun and buying this new “fake money.” But to everyone’s surprise it kept rising in value.

“It was a lot of fun [reading 4chan] because there was so much emotion,” he says. “People were becoming rich and they were just losers who like sitting at computers. They were getting filthy rich and the memes were hilarious.”

Perrault stayed away from cryptocurrencies until early this year, where he decided to invest in the up and coming Ethereum, turning $2,600 into $7,000. He cashed out and waited a few months before putting $1,000 into a privacy-focused altcoin called Monero. He cashed that out investment at $8,500.

“A lot of people want to hide their money, where their assets are. The best way to do that is to buy anonymous cryptocurrency. Nobody can prove that you own it.”

An avid supporter of someone’s right to anonymity, he says that cryptocurrency can act like a financial bomb shelter. If the banks fail, or government crumbles, the cash in crypto will remain and can be transferred anywhere in the world easily. “If I want to send money to my family in Algeria, how do I do it? What better way than to send cryptocurrency? It will all be there.”

With so much of our lives publicly displayed online, some are now desiring more privacy. You can encrypt your phone, emails and other communications. Now cryptocurrencies can provide financial privacy and security.

It looks like this is not just a fad or trend either. The Canadian government is now using Ethereum technology for record keeping in a pilot project. Companies such as Volkswagen, Bosch, Microsoft and IBM have all invested heavily into different crypto projects.

But buyer beware: there are over 1,500 currencies listed on coinmarketcap.com and not all are strong projects backed by dedicated teams. Do your research, fall in love with the technology they are providing and look to see if they are making announcements involving key partners. Most importantly – do not invest what you can’t lose.

*Name has been changed