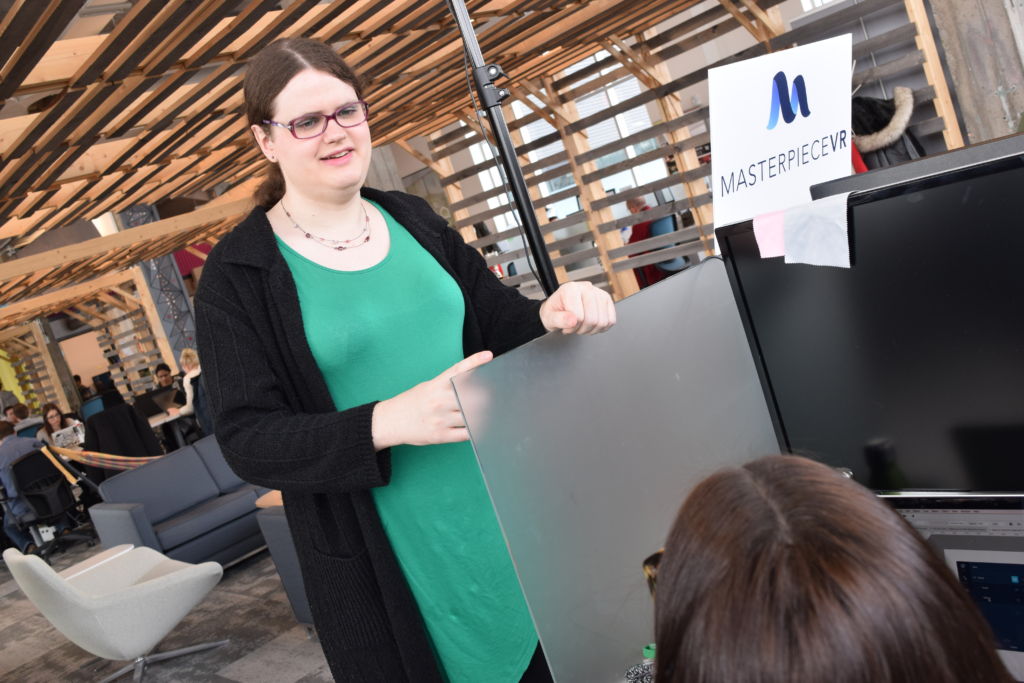 Shortly after Charlotte Brown graduated from Algonquin’s game development program in 2017, she dropped by the headquarters of a local VR software company to check out what they were working on, after a tip from a former teacher.

Then she got a call. It was the CEO, Jon Gagne, offering her a job as a developer.

“It’s a really small company,” Brown says of Masterpiece VR, an Ottawa company that makes the eponymous virtual reality modeling program. “That table and that table,” she says, gesturing towards the small space the company occupies inside the Innovation Centre, a shared corporate workspace in Bayview Yards.

Of the 14 people who work at Masterpiece VR, about 11 of them are Algonquin game development grads, or are even professors, Gagne estimates. That wasn’t quite a deliberate decision, but it just so happens to be that Algonquin’s grads have the right skillset to make them hot commodities for this growing local company.

“Although we’re not creating a game, we’re using a lot of the underlying tech,” says Gagne. “We kinda had to train them up in VR way but they kinda had those base skills already.”

Alex Imray Papineau, also a developer who came from Algonquin’s game development program, says college prepared him well for the workplace he is in.

“The students that Algonquin gets to graduation point are very skilled,” he says. “Coming into this, I already have… experience in working as a team, working as a group.”

He says he got the job shortly after graduation, when he met Gagne at an industry event and hit things off.

“We spoke a bit and I told him I had just gotten a VR headset and he was impressed by my willingness to get into VR, which was this super new thing two years ago,” Papineau says. “He wanted to know if I wanted to be a part of this company.”

Brown and Papineau said they enjoy the challenges of their work and are still learning lots.

“It is very rewarding, because you develop yourself a lot,” says Brown.

For a student fresh out of graduation, it’s a good industry to be in – consulting firm Deloitte estimates the VR market hit US$1 billion in 2016.

Although Deloitte did not estimate the industry’s growth rate, it shows no sign of slowing down for Masterpiece VR, Gagne says.

“We’re doing very well, I can say that the market is rapidly expanding,” he says, while declining to share information on the company’s sales or revenues. Masterpiece VR retails for $32.99 on digital marketplaces like the Microsoft Store or Steam.

The target audience at the moment is individual digital artists who are looking for a simple way to make 3-D art, says Papineau. Although Gagne says they are looking to expand into the corporate market, attracting customers such as game studios, animators and even engineers.

“We believe in the next five years as the technology makes it easy and quick for companies to make 3-D content, that opens it up to any business around the world,” Gagne says.

The company must first overcome two major barriers, he says — technical and creative.

“The technical barrier is being solved by simple tools and a natural interface (that the product provides).”

And the creative barrier? “You have to be good at creating,” Gagne says.

Employees at headquarters when Glue dropped by were tight lipped about current projects – Brown says software companies typically don’t want to promise features in case they drop the ball or are delayed – although Gagne said there are some goodies upcoming.

Currently artists using Masterpiece VR must stand inside a cube within their virtual workplace to sculpt, as a way to control memory usage. But Jeremy Plante, the company’s marketing and community relations lead, says an upcoming feature called “layers” will do away with the cube.

Gagne was coy but suggested there would be more to come.

“Where we’re headed is something that is beyond anything anyone else is doing,” he says.