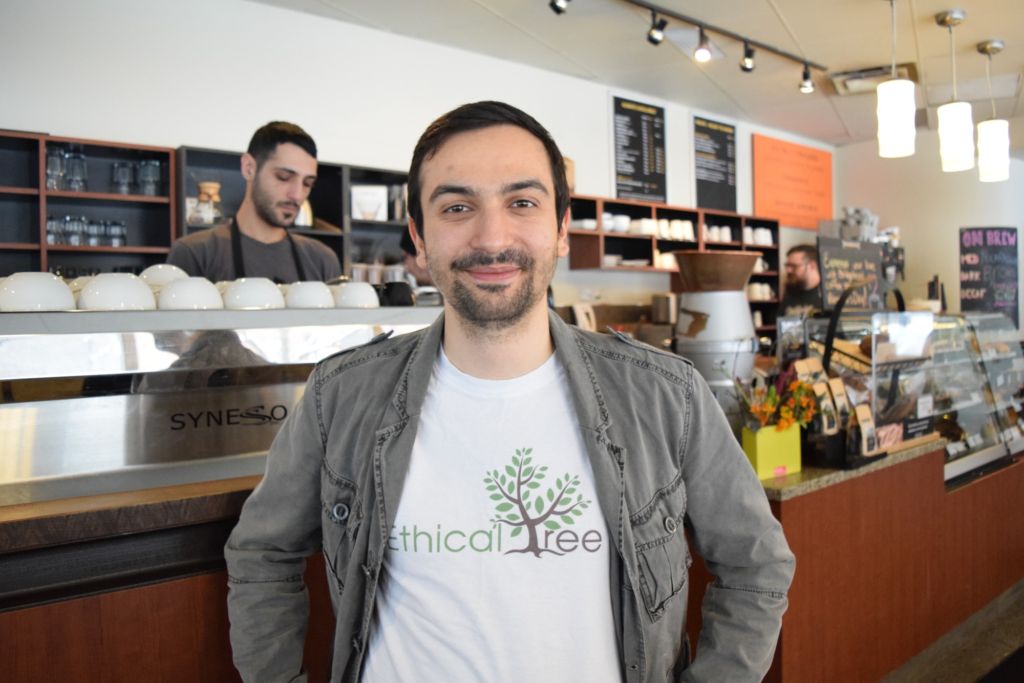 EthicalTree Co-Founder, Siavash Ghazvinian, is working to bring ethical consumerism into the spotlight.

Frank Ferris and Siavash Ghazvinian know what it’s like to be up against the odds. In 2014, while studying international development at the University of Ottawa, they partnered up to lead a revolution to create a new student association for their program by attempting to split the one in place to better serve the students in their specific field of study.

A referendum to do this had been tried twice before with both attempts being crushed. This time, with Ferris and Ghazvinian at the helm, they succeeded with over 80 per cent of voters supporting them. Unlike the Quebec referendums in 1980 and 1995, this time the separatists succeeded. The key to their win was hard work and compelling leadership from the pair.

Fast forward four years and now both uOttawa graduates are still working to create a revolution. This time, it’s an ethical consumerism one. The two partners founded EthicalTree in the spring of 2016 – an online directory for businesses in Ottawa and Kingston that align with ethical principles. For now, those principles refer to fair trade, vegan, organic and female-ownership.

In January 2017, a third team member, Willy Collins, was brought in to help on the web development front. They all consider themselves co-founders.

The original business idea came from Ferris while he was still a student. He wanted to consume products and services that aligned with his ethical values, but was having trouble finding information on what was out there. That’s when the lightbulb in his head switched on – there was a gap in the market. He thought about and toyed with iterations of what is now EthicalTree for a year before partnering with Ghazvinian and later Collins.

“I quickly realized that the market [for a service like this] is much, much bigger than just me and that so many consumers are trying to find businesses that align with their values, whatever those values may be,” says Ferris. “I spent $20 on a website to test the idea and got great initial success.”

The entrepreneurs follow the lean-startup model of bootstrapping operations as much as possible and testing multiple strategies before moving forward with one.

Additional capital has been garnered through various grants and startup competition winnings, not to mention partial subsidization by Ferris’ salary from his full-time job at Global Affairs Canada. He manages EthicalTree’s business operations on the side. Collins, the technical lead, also has a full-time job. Ghazvinian is currently the only one of the three working on EthicalTree full-time, focusing on sales and marketing.

The directory has over 300 listings of businesses fitting their ethical criteria in Ottawa and Gatineau and has expanded into Kingston. Their revenue model relies on businesses paying for ads and priority listing space on the site. They’re still tinkering with pricing strategy, and Ghazvinan stresses that they want to be sure clients see a strong value proposition.

“The thing about paying clients is the more you have sometimes the less value you’re giving to them,” he says. “We want to understand and meet the needs of all our clients.”

The almost two-year ride since officially launching EthicalTree has had its ups and downs. There were times when Ferris, Ghazvinian and Collins were unsure of the venture’s future.

“We’ve been down in the dumps a lot of times, but the one great thing about Frank and I working together is that we don’t overthink our successes or our failures,” says Ghazvinian.

Ferris added that what helps them push through tough times is the fact that despite being a business, this is also a passion project for everyone involved. Whether or not they are always making money, their dedication to the cause keeps them motivated.

The founders stressed that there’s a lack of strong competitors in the space, something that’s both a blessing and a curse. On one hand, there’s a gap in the market for their service, but on the other hand, since they’re helping shape the space they operate in, there’s a higher degree of uncertainty.

Despite challenges, EthicalTree continues to grow upwards of 50 per cent each quarter. Their commitment to continual testing in Ottawa and Kingston has helped validate their financial viability and has given the founders the confidence to make their next big moves – rolling out a revamped web platform, which Collins has been working on for the better part of a year, and expanding into Toronto.

A testament to his passion for and belief in EthicalTree, Ferris is scheduled to quit his government job this May and move to Ontario’s capital to lead the charge into this new market.

Throughout it all, Ferris says teamwork, collaboration and open communication between all three co-founders have been at the core of their success.

“They often say the team of a startup matters more than the idea, and I think we’ve proven that.”