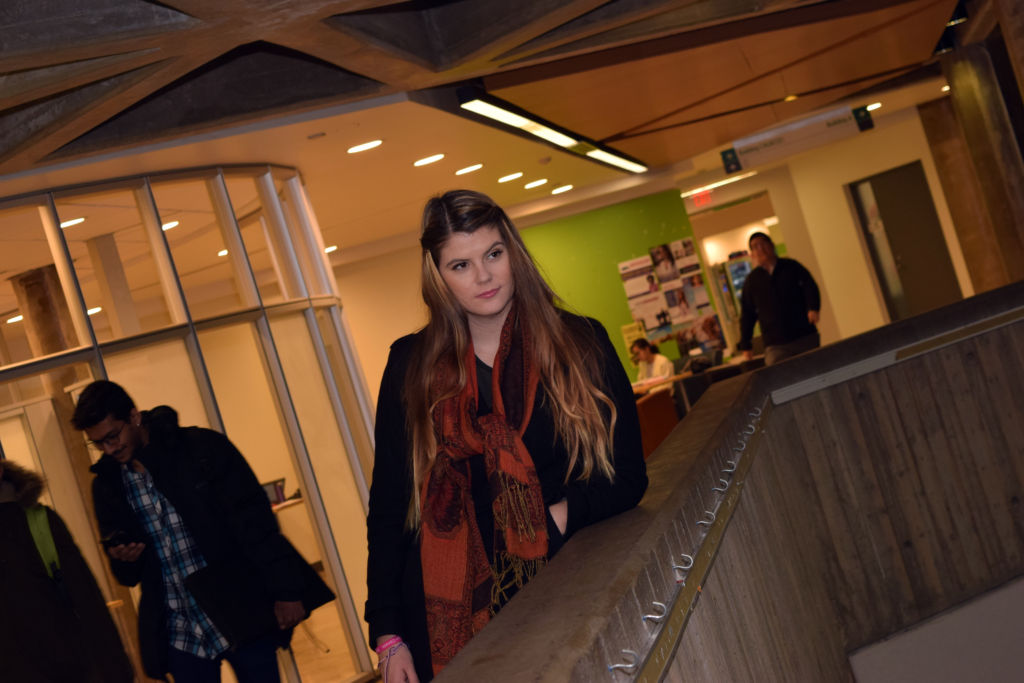 Thanks to the rise in contract work, the gig economy is transforming the workforce. Young workers like Danielle Allard face tough economic conditions.

Danielle Allard has never had a permanent, full-time job.

At 29, Allard is a professor of communications at Algonquin College, a multi-genre musician, an occasional television host on Rogers TV and sometimes an event photographer. But never is she only one of these at once.

“I would make a joke that it’s my personality,” she says. Another reason is because she’s “high anxiety” and can’t sit still for long in just one job.

Allard enjoys the variety that her many jobs offer. But she’s looking to put her MA in communications, which she earned at Carleton University in 2013, to use in a dedicated career as a teacher, rather than jumping contracts term-to-term as she does now.

But for Allard, like many young workers in today’s economy, that full-time job is hard to come by. Allard is in the gig economy. It’s a phenomenon that has been rising in recent years, characterized by unstable contract-to-contract work in lieu of the traditional full-time job and all the benefits that come with.

Young people, fresh out of school and new to the workforce, find themselves frequently chasing down contracts rather than the stable job they thought would be available upon graduation.

Meanwhile, women experienced a marked increase in full-time employment since 1976, mainly because more women have entered the workforce since then.

Somewhat of a silent trend, it’s often thought of in the context of newly-created jobs, like Uber drivers. But as the recent Ontario college strike has shown, it cuts across just about any industry in any vocation – media, healthcare, the trades – and education.

“As much as I can say the gig economy can give you so many opportunities, long-term it’s also just not healthy,” Allard says. “I worry. I work with so many students who are struggling to find employment.”

As a college teacher, Allard spent five weeks in October and November on strike in part because colleges, her union says, don’t have enough full-time staff to support students and instead rely too much on contract faculty.

And just like how she’s found herself stuck in contract-to-contract work (her contract with the college has to be renewed every four months), students will too, she says. “I’m working in multiple programs where it is a gig economy and [that’s] what they’re graduating into,” says Allard. “And I wish I could give them a world where they had benefits and a retirement plan.”

Frances Woolley, president of the Canadian Economics Association and an economics professor at Carleton University, says the gig economy represents a transition period not unlike industrialization. “The pain of economic adjustment tends to fall on new workers,” says Woolley. “New workers are being taken in under different conditions.”

For example, Woolley says many older workers have been grandfathered into the traditional employment model, while many businesses now bring in new workers under contracts or more precarious terms. It can be cheaper for employers, as they don’t have to pay worker benefits such as Employment Insurance, workman’s comp and severance pay – themes that become evident when examining post-secondary education. “The strike was an example of that,” she says. “You have the colleges and the universities, when they add new programs they rely increasingly on contract employees.”

It’s difficult to say whether the adjustment is a net positive or negative for the economy, partly because the gig economy is so loosely defined. She characterized it as “not steady or predictable”, but adds that could be many things to many people – including the self-employed. “If you can’t define it, you can’t measure it,” she adds.

For better or for worse, one Ottawa entrepreneur said it’s the way things are now. “The way I look at the gig economy is, it’s the economy right now,” says Eric Collard, managing partner of public relations firm Ottawa Media Group.

His company was founded in May 2014 and modeled around the gig economy. Despite operating in both Ottawa and now Toronto, it has no office – and no need for one. “Up until 2000, you’d go to an office from nine to five,” Collard says.

But what he called the “Mad Men” picture of having clients at the office – maybe crack open a whiskey – for meetings is outdated. These days he goes to meet the clients, not the other way around.

Employing people by contract makes more sense for business because it maximizes flexibility and cost savings. “I can either have one person who’s costing me $50,000 per year and is only good at a few things,” he says. “Or I can take that $50,000 and spend it on multiple service providers.”

Previously a reporter, Collard spent much of the 2000’s working several full-time jobs in public relations. Around 2008-09, he left Ottawa City Hall’s media relations department and fell in love with contract work. “My number one M.O. for work isn’t security. I enjoy new things, exciting things,” he says. “It’s a different game.”

Besides the refreshment of a new job every day, he says it can be a positive for workers who specialize in specific fields. Once upon a time, work was only available in city centres like Ottawa or New York, but now anyone anywhere can get in on it.

“A lot of people can make a decent living. I see it as almost democratized work,” he says.

Although with different perspectives, Collard and Allard have similar advice for students – keep learning and find your skill set.