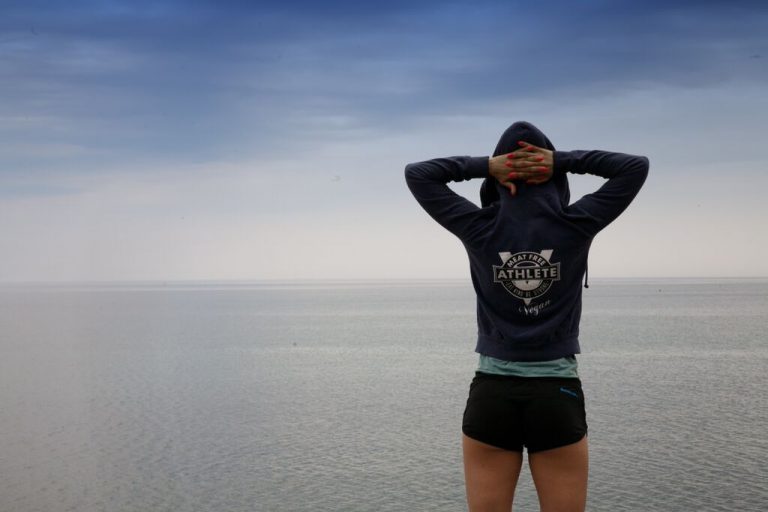 Photo by: submitted by Samantha Shorkey

“I am so sick of hearing ‘where do you get your protein from?’” Shorkey says. “Beans, tempeh, tofu, nuts, seeds, leafy green vegetables, oats, grains. The list goes on and on. There is protein in almost everything. Not getting enough has never been an issue for me.”

She often hears trainers saying that eggs or fish are necessities to get the proper kinds of lean protein, but Shorkey believes that protein is protein and beans are just as effective for muscle-building as, say, bison meat or tilapia.

“Yes, bodybuilders have to consume A LOT of protein,” Shorkey says. “And I do. But I’d sure as hell rather be digesting copious amounts of spinach and chickpeas than animal secretions and/or the flesh of tortured souls.”

Going meatless has been a lifestyle she chose early on. She was only eight years old when she went vegetarian.

Growing up in a log house in the middle of the forest in Middleville, what she calls a small “hunting village”, just outside of Ottawa, Shorkey didn’t have cable TV – she had nature. Her family took in stray cats and raised orphan baby squirrels. Her mother would feed the wildlife around them and sometimes they would have up to 30 deer behind their house.

“I adored living in the forest, surrounded by wildlife,” Shorkey says, “except for when hunting season was on. It is beyond heartbreaking hearing the three-week-long sound of guns being fired and loud ATVs ripping around the back roads.”

“And, of course, our beautiful does and their baby fawns, the big-horned bucks who’d graze on our property – so many of our deer we’d never see again,” Shorkey says. “I just couldn’t understand how people could hunt and kill such beautiful, sweet creatures.”

Shorkey went completely vegan in 2011 when she learned more about the dairy industry and realized that animals were still dying because of her milk and egg consumption. She shortly then started up her blog Jacked on the Beanstalk and has even written a book by the same name where she shares power-packed, plant-blased recipes.

She remembers how her mother let her skip school one year as a child so that she could protest against hunting season.

“I spent a whole week making picket signs,” Shorkey says. “Then I packed a thermos of hot cocoa, wore Christmas reindeer antlers and stood post at a busy four-way intersection, waving my signs with each sight of a truck or men dressed in orange hunting gear.”

It is one of her proudest memories. 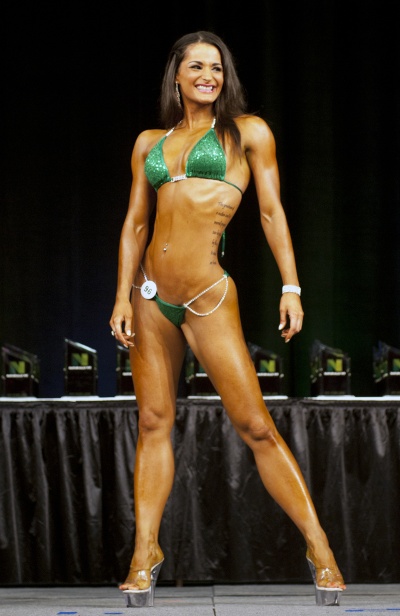 Coming from a woman who won first place in the bikini-tall division of her first-ever fitness competition this says something about her characters. And that first competition in 2013 was against all meat-eaters in an untested show.

Shorkey was also awarded her pro card in 2014 when she won first place and the overall bikini title at the 2014 INBF South Western Natural Championships in Austin, Texas. She became the first vegan WNBF bikini pro and is the only female Canadian in the PlantBuilt muscle team.

Shorkey had always enjoyed going to the gym but only started to get serious about weight lifting when she was dating a personal trainer.

Truthfully, it was a horrible relationship and for a year of it, we did the long-distance thing,” Shorkey says. “I was miserable but madly in love so I wanted to get in awesome shape and blow him away when he finally returned.”

She bought a weight bench and dumbbell set off Craigslist and did at home style workouts in her tiny bachelor apartment for that entire year.

“Every time I was upset, I’d blast death metal, bawl my eyes out and hammer weights like a beast,” Shorkey says. “Eventually we broke up and I graduated to a “real” gym.”

But back then, there really weren’t any vegan professional female bodybuilders.

“Of course that made me curious to see how I’d ‘size up’ (pardon the pun),” Shorkey says.

She had no idea what to expect. She just wanted to challenge herself.

“And who am I trying to kid? I am an attention-seeking egomaniac,” Shorkey says. “An amateur bodybuilding show seemed like the perfect outlet for the cocky and competitive exhibitionist inside of me. To be able to strut my stuff and possibly break some of the vegan stereotypes that existed was just the sugar-free icing on the dairy-free cake.”

Susan Macfarlane, a dietitian since 2011 and a vegan for the last eight years, says it is easy to get enough protein to support general health and “elite athleticism” in a vegan diet. In her work in private practice at the Nepean Sports Medicine and Physiotherapy Centre she often works with vegetarian and vegan athletes.

“But you do have to make an effort to ensure that you are planning your meals with protein-rich food,” Macfarlane says.

The first step to achieving optimal athletic performance on a plant-based diet is ensuring sufficient calories. Vegan diets (especially those that are based on whole foods) are less calorie dense than omnivore diets, meaning that for the same amount of food, you are eating fewer calories, Macfarlane explains.

“If calories aren’t met, muscle growth and repair may be compromised. The next step is ensuring sufficient protein intake throughout the day,” Macfarlane says. “Our bodies can’t absorb large amounts of protein at one time, so its important to ensure protein is included at each meal (along with carbohydrates).”

She says she calculates protein requirements based on an athlete’s body weight and sport. While all athletes have increased protein needs, strength-trained athletes’ requirements are the highest. After discussing requirements, Macfarlane will focus on protein quality.

” Soy is the only truly ‘complete’ plant-based protein, since it contains sufficient amounts of all the essential amino acids,” Macfarlane says. “In contrast, other sources of plant-based protein, such as legumes and grains, are low in one of the essential amino acids. However, including these different food groups in your daily diet will help to ensure you get sufficient protein.”

According to Macfarlane, most vegans find it easy to meet protein needs at lunch and supper, however breakfast can be a challenge. She suggests some high-protein breakfast meals would be a tofu scramble with whole grain toast, almond butter, and fruit, or buckwheat groats with almond butter, soy milk, hemp hearts, pumpkin seeds, and fruit.

“There are also many vegan protein supplements and bars that can be used in a pinch or when trying to top up requirements,” Macfarlane says.

Shorkey’s advice for those considering getting swole while plant-based, or going vegan while already jacked, is always: baby steps first.

“If you’re a meat eater, try going vegetarian first or incorporate just two or three vegan meals into your diet every week,” Shorkey says. “And if you’re already vegetarian, try to only eat vegan at home and allow yourself cheese or milk when you’re dining out or as a “special treat” only. That’s how I began the transition from vegetarian to vegan and I found it was quite easy.”

Tthere are so many vegan options available nowadays that anyone can replace common comfort foods like cheese or milk with a dairy-free substitute.
“As for those starting a vegan training regimen, try to ensure you’re getting 99% of your nutrition through whole, plant-based foods,” Shorkey says.

Yams for instance, are a wonderful starchy, complex carbohydrate source that will help get you through those long, hard workouts.

She also suggests watching the sugar and sodium content in foods since they can be very bloating.

Combine all ingredients in medium-sized bowl.
Add a tablespoon or two of water if dough is too dry.
Form into balls.
Put in freezer and allow them to harden for a half hour.
They can be stored in fridge or freezer.