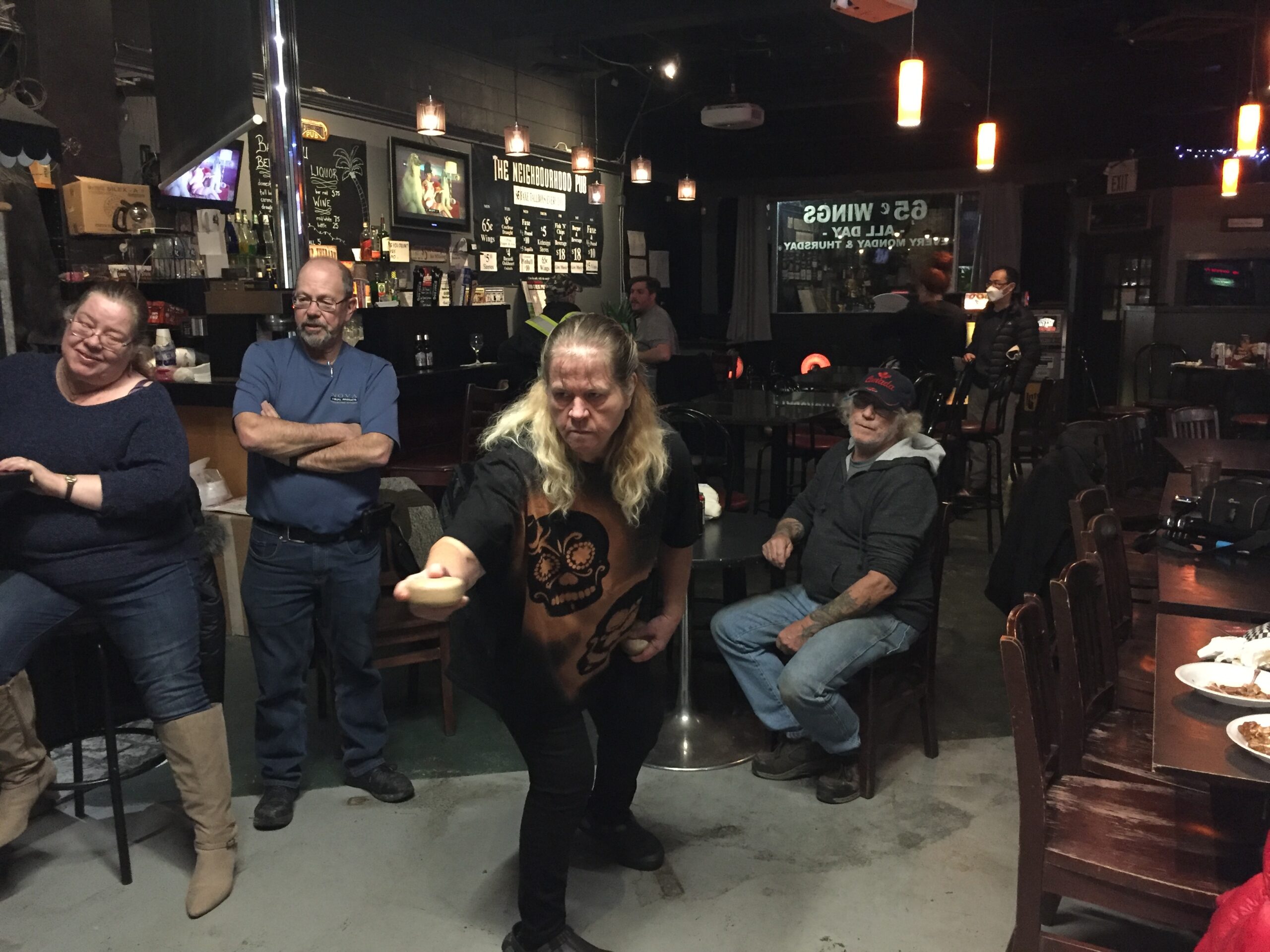 A game of "skittles" involves tossing a wooden disc called "the cheese" at a board of nine pins nine and a half feet away.
Photo by: Cameron Ryan

An unassuming strip mall at the corner of Baseline and Greenbank is where you’ll find The Neighbourhood Pub.

Flanked by a shawarma eatery and a beauty salon, the pub is as humble as its location. In an era of trendy restaurants that like to dress up like they’re a dive bar, the Neighbourhood pub is no pretender. What you see is what you get. And what you get is a five star dive bar with a couple hidden gems.

People are often looking for a restaurant that is warm, comfortable and inviting. The Neighbourhood Pub is none of these things, and that is all a part of its unintentional charm.

As soon as we entered we were greeted by a crudely made sign advising us that they do not accept debit as payment. We wouldn’t let that deter us from our objective: To gorge on 65 cent wings, the Monday special. As broke college students, we were inspired to visit by the economics of cheap chicken wings.

The first hidden gem of the night came before we even sat down. Attached to the pub is a separate room with around two dozen pinball machines and a few other retro arcade games. Unfortunately for us change is a dying currency, so there would be no pinball that night.

The atmosphere was exactly what you would expect for a Monday night. At the bar, a couple of blue-collar men drinking their day away, a few couples out for a cheap date night and in the back corner our diverse group of college students, out of place but welcome.

It was not a long wait for our objective to be met. We each had a pound of cheap and delicious wings. For 65 cents, they were worth every penny. It’s hard to screw up wings but for such a low price we thought there had to be a catch. Thankfully our suspicions were unfounded.

As we were preparing to pay our respective bills (which all came out to less than 10 dollars including a drink) a group of bar patrons began playing a game that demanded our collective attention.

They explained to us that the game was called “skittles” and it involves throwing a solid wooden disk called the “cheese” at a game board with nine wooden pins. The objective is to knock down as many pins with three throws of the cheese. I promise it’s harder than it sounds. Our group put our collective effort into our first-ever match of skittles and gave the veteran group a serious run for their pride.

The Neighbourhood Pub will prove your worst doubts about a dive bar wrong. Come with an open mind, an empty stomach and on a Monday for 65-cent wings and a game of skittles.