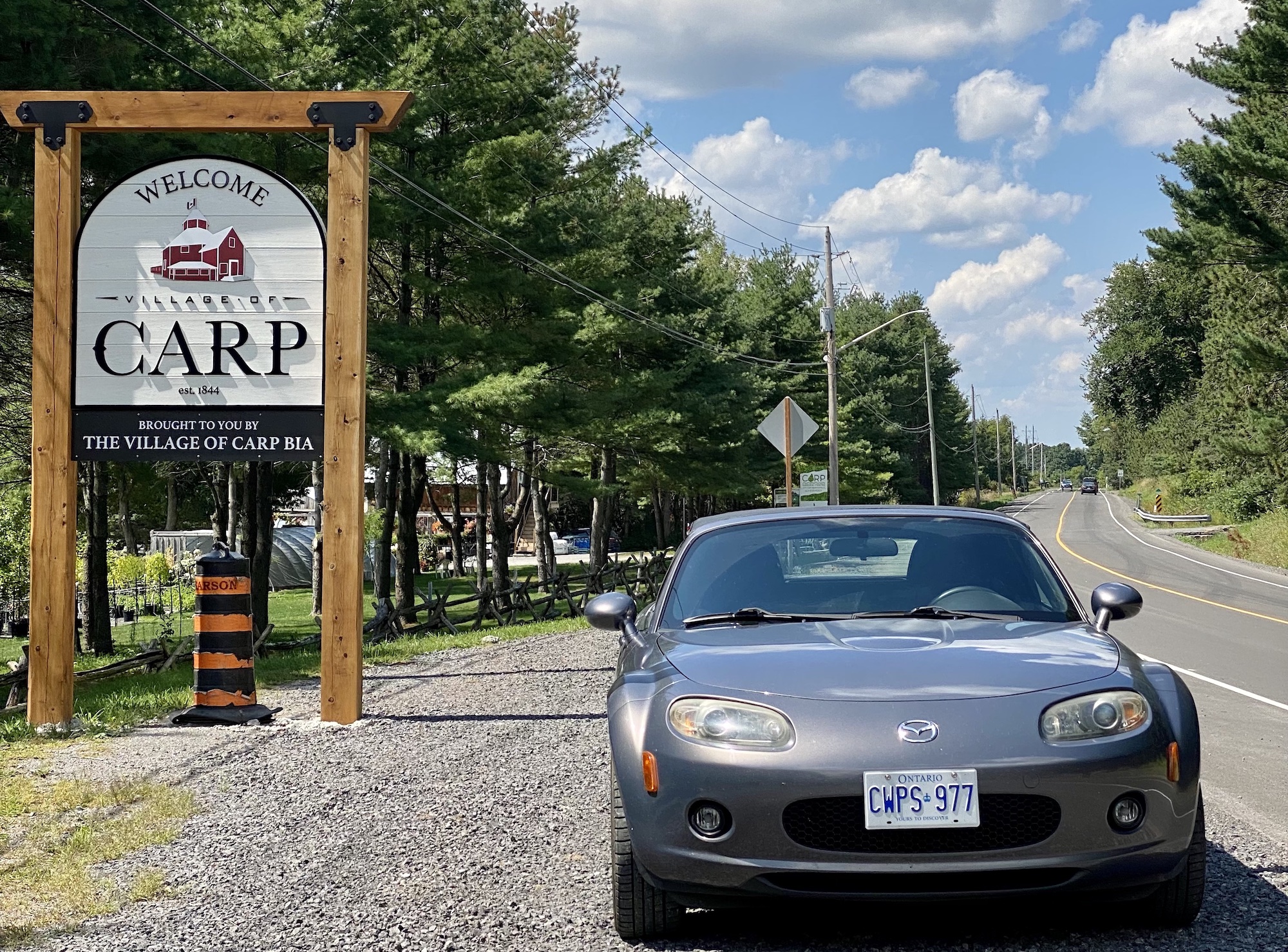 From its launch in 1989, the Mazda MX-5 is in its fourth generation and remains unparalleled in putting a smile on its owners' faces. The author drives a third-generation model.
Photo by: Aadil Naik

A cat ran across my shoulder, while another sat in the footwell. I could see neither, on account of both being pitch black, like the night around us. The tiny boot (“trunk” in North American) was overflowing with a huge duffel bag, a yoga mat and a few jackets. In the strictly two-seater cabin in front was stuffed a full-size suitcase, a backpack, a laptop bag, a dismantled pet cage, and my friend Magan, who I had come to receive at Ottawa airport. It was the happiest I had been in a car in the 12 years I’ve been driving.

I bought a 2006 Mazda Miata MX-5 in June, and was persuaded to name it Carlisle. I’ve never named any vehicle I’ve had before, but it’s starting to grow on me. It does look like a Carlisle.

Deep gray with a black cloth roof, the Miata is a small, two-seater convertible. I mean really small. Just four metres from nose to tailpipe. You will barely fit if you’re six feet tall and you better be comfortable with your passenger because it will get cozy, whether you want it to or not.

It is admittedly a questionable decision to buy a two-seater rear-wheel-drive car as your only means of personal transportation – and that’s without factoring in the wisdom of doing it in a country that gets a winter season like Canada’s. But I spent four years reviewing automobiles for a living and my biggest takeaway was that lightweight is more fun than big power. The Miata weighs 1,100 kg, with the engine in front sending 168 bhp to the rear, a stick shift in the middle and three pedals in the footwell. That’s page one, chapter one of the petrosexual handbook.

Is it practical? Well, it’s not an SUV, but I was dead set to prove it could do pretty much everything a normal car could. And that’s where this story really begins – a steely determination to disprove everyone who let out incredulous gasps at my decision. I’ve taken it on long journeys. I’ve taken it to the racetrack. I’m going to drive it in the winter.

But there was always the question of luggage capacity, in which the Miata is admittedly very limited.

So when Magan called to say they were returning to Ottawa and needed a lift, I signed up. To be fair, I was misled. I sent my friend pictures of the boot with the very specific request to state the entirety of their luggage and whether it would fit. Their response? “I have just one large duffel bag and a pet cage for two cats.”

I was confident a duffel bag could be squeezed in and the cats could ride in the cabin up front. Imagine my worry when, at 11 p.m. I show up at Ottawa airport to find so much more than just a duffel bag and a cage.

But I underestimated the Miata’s largesse. The boot swallowed the 70-litre duffel bag with space to spare for the yoga mat, jackets and parts of the dismantled cage. A full-size suitcase slotted into the space behind the passenger seat, and the rear parcel tray was just enough for a backpack and a laptop bag. Magan fit in the seat that I’d slid all the way to the front, with the remaining parts of the aforementioned cage in their lap. The cats were let loose in the car.

With everything in, I was surprised there was room for me. Shifting gears was a bit iffy, and one of the cats bit me before we left (I still don’t know which – the cats are twins). But then they both settled down – Juno spread out on the dashboard and Lenny sat on the bags behind our heads.

And off into the night we went.

The front fascia of the Miata looks like it has a goofy smile permanently plastered on its face. That night, I could feel that smile – Carlisle just happy to be part of an adventure, spreading joy with every mile. There was no worry or stress. The car is just an extension of my persona. We laughed and talked and the cats purred.

I’ve been driving cars for a long while, and I’ve been fortunate enough to be behind the wheel of some truly epic ones, from Bentleys to Ferraris. The Miata isn’t epic. It lacks the pharaonic opulence of a Rolls Royce within and the axe-wielding brutality of a Lamborghini without. But the best drive of my life was filling Carlisle to the brim and driving it across Ottawa at midnight. People said it couldn’t be done. And yet, there we were.

As I pulled into a quiet driveway far away in Carp I realized the old adage about them holds true: Miata Is Always The Answer.

I love this little car.