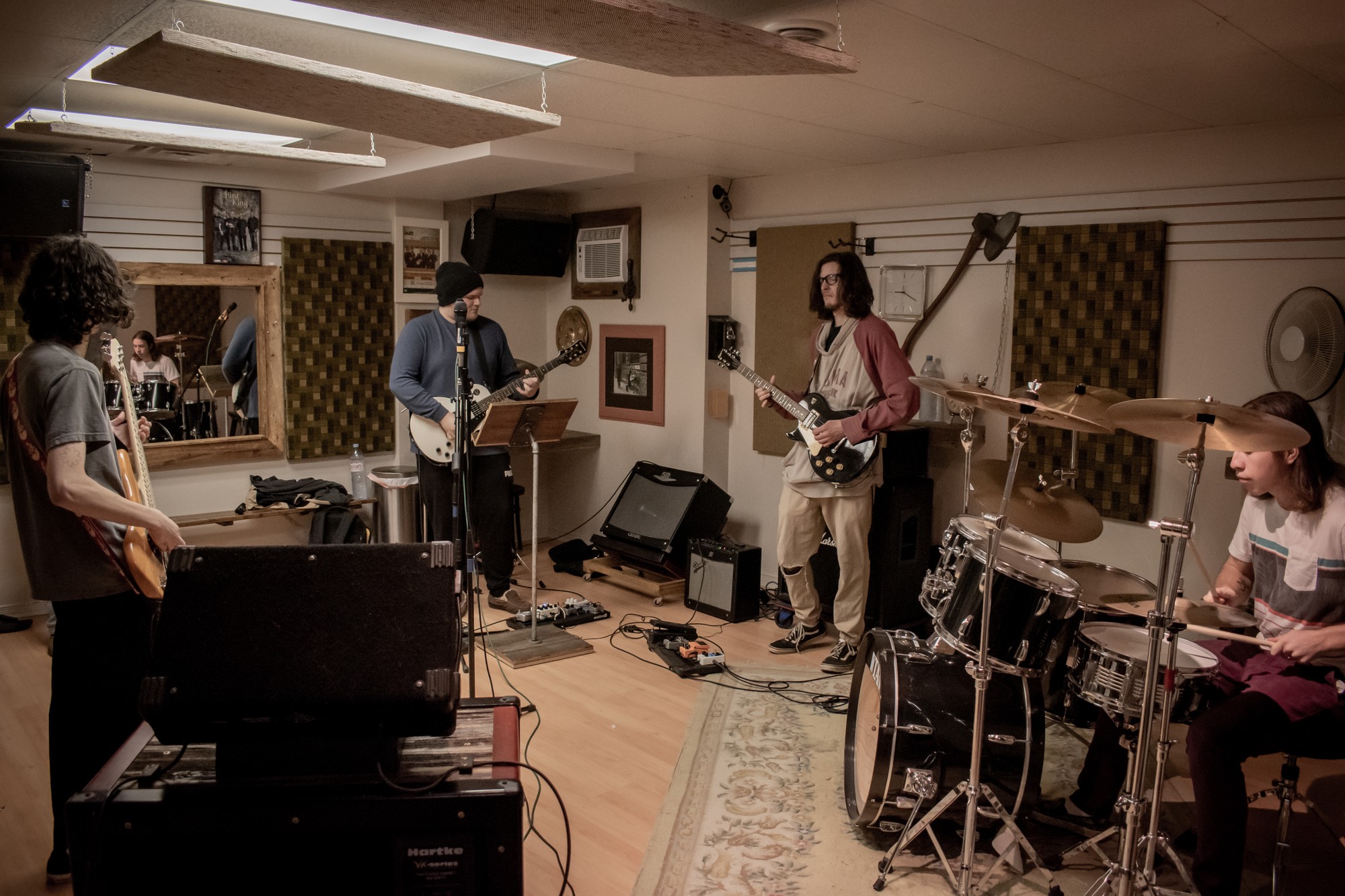 "We kept having a string of bad luck with places to play. We the vision, good songs to back it up, but no place to play," said bassist Aidan Mc
Photo by: Ethan Grove

Crashing cymbals and a snappy snare drum sounded through the halls as I walked up the stairs into the practice room. I walked through the door followed by Zach MacDonald, Aidan McCulloch and Scott Martin, joining Brandan Lackey, who was sitting behind his all-black Tama drumkit opposite the door. I was now surrounded by Neon Ghosthouse.

The room was a representation of years’ worth of local artists practising and finding their voices. A rented space overlooking an industrial park, full of instruments hanging all around the walls; saxophones, trumpets, guitars, drumheads, microphones and cracked cymbals, all separated by group photos of countless bands, from barbershop quartets and jazz bands to alt-rock groups like the one to which I’m listening. All had found a home in this practice room at the Jam Barn, in Orleans.

Started during COVID, the band has had to overcome the challenges put in place by provincial restrictions. Having only played one show the band continues to practise while they wait for restrictions to change.

As Lackey continued to run through fills and difficult snippets of songs he wanted to work on, the rest of the band began to set up.

On Lackey’s left, McCulloch plugged his butterscotch–blonde Squier Precision Bass into the Behringer Ultrabass BX3000T head that sat on top of the Hartke VX410 bass cab he’d wheeled over beside him.

Across from him was MacDonald, plugging his left-handed black Epiphone Les Paul into his 20-watt Fender Mustang amp and tapping on his pedals with his right palm as his left hand was picking randomly to ensure they were all working.

Martin, directly to MacDonald’s right, was plugging in his white Epiphone Les Paul into the Crate v50 all-tube guitar amp that was sitting beside him. He began tapping his pedalboard with his foot while he picked through scales and melodies and mumbled nonsense into the microphone in front of him, making sure he could hear himself.

As everyone set up, they joined in the everchanging rhythms played by Lackey, altogether creating a spontaneous performance of improvised songs that will never be replicated outside of that practice room.

After 30 minutes of warmups and deciding on the format of the upcoming practice, it was time for one final smoke before they began.

Standing outside in the cold autumn air, we talked about the band. Neon Ghosthouse formed almost exactly a year ago to the date, in October 2020, as the province plunged Ottawa into a modified stage-two lockdown, making live shows a thing of the past.

The band struggled to find places to practise even when the province allowed them to gather in person. They bounced around different girlfriends’ and ex-girlfriends’ garages, not liking the confining rules of the homeowners and communities they were in. They searched for places that would allow them to practise whenever they wanted, without distraction.

With the Jam Barn, they felt they’d found a new home for their practices, but the pandemic meant ever-changing rules and hours, and finding time to practice became a daunting task. Fortunately, the band was committed and willing to work through these difficulties, all writing their own songs, sending recordings back and forth to build songs and practising together when possible.

When the band started, they decided to build a social-media following, as they couldn’t play live shows. Taking to TikTok and Instagram, they began embracing their individual personalities and giving followers an in-depth look at the process, making the fan feel like they were in the garage with the band.

“We woke up one morning and we were at 1000 followers, and then the next day it was 2000 and it just kept going up like that until one day it was like ‘holy shit we’re almost at 10,000 followers,’” said Lackey.

Riding the high of a viral TikTok, the band continued to create and post content to various social-media platforms until the province was thrust into a new lockdown. The band could no longer gather in person and the content began to slow. As the final nail in the coffin, the band’s TikTok account was hacked, and that 10,000-follower account was lost.

With a new fire to grow a following, they began creating stockpiles of social-media content that can be posted if the band can’t get together and are tirelessly working to regain the following they lost.

Watching the band practise, you can see the passion in the eyes of all the members. The social media following has helped them realize they might have something that sets them apart from their peers.

“A lot of the time when people ask, we just say alternative because we can’t really explain it,” said McCulloch.

“Like the new one is stoner rock, and then we have another one that’s more pop-punk and then ‘solitude,’ which is super heavy and in your face,” said Martin.

Many new bands struggle to find their voice. Often, they commit too hard to a specific genre and then get stuck in something they don’t enjoy doing.

Neon Ghosthouse has found a way to bring all their interests and influences into their own genre that they flow through effortlessly. Listening to them bounce between songs, you can hear how they embrace the difference while still making music that is recognizable as Neon Ghosthouse.

While practising during a pandemic can be a hurdle, the band appreciates that it’s given them time to focus on making sure the songs they play are perfect.

With no existing fanbase garnered through live shows, they felt there was no pressure to host virtual performances making up for the shows that were being missed due to the ever-changing restrictions.

As the cigarettes they’d started when we began the conversation turned to ash, we opened the glass door and walked back up the stairs. The band was loudly discussing the order they wanted to play their songs. You could feel the excitement rising with every step we took, closer and closer to the room in which they’d left their instruments hanging, awaiting our return.

The set was comprised of songs written by all members of the band- some being fully completed and others still needing lyrics.

They blazed through their songs. Every time they played through there was something else to focus on. Whether it was Lackey smashing the cymbals at a deafening frequency, or MacDonald bending down mid-song to turn knobs on his delay pedal, transforming a regular guitar sound into ever-fading siren sounds.

Playing a song I had never heard, MacDonald stepped on his Crybaby Wah pedal and broke into his solo like Red Hot Chili Peppers guitarist John Frusciante. I looked around in shock as he shredded through it, further proving this band need not be confined to a specific genre. These guys can truly do it all.

“We made do… it felt like good old garage rock,” said McCulloch. “Four twenty-something year-olds just being loud as fuck.”