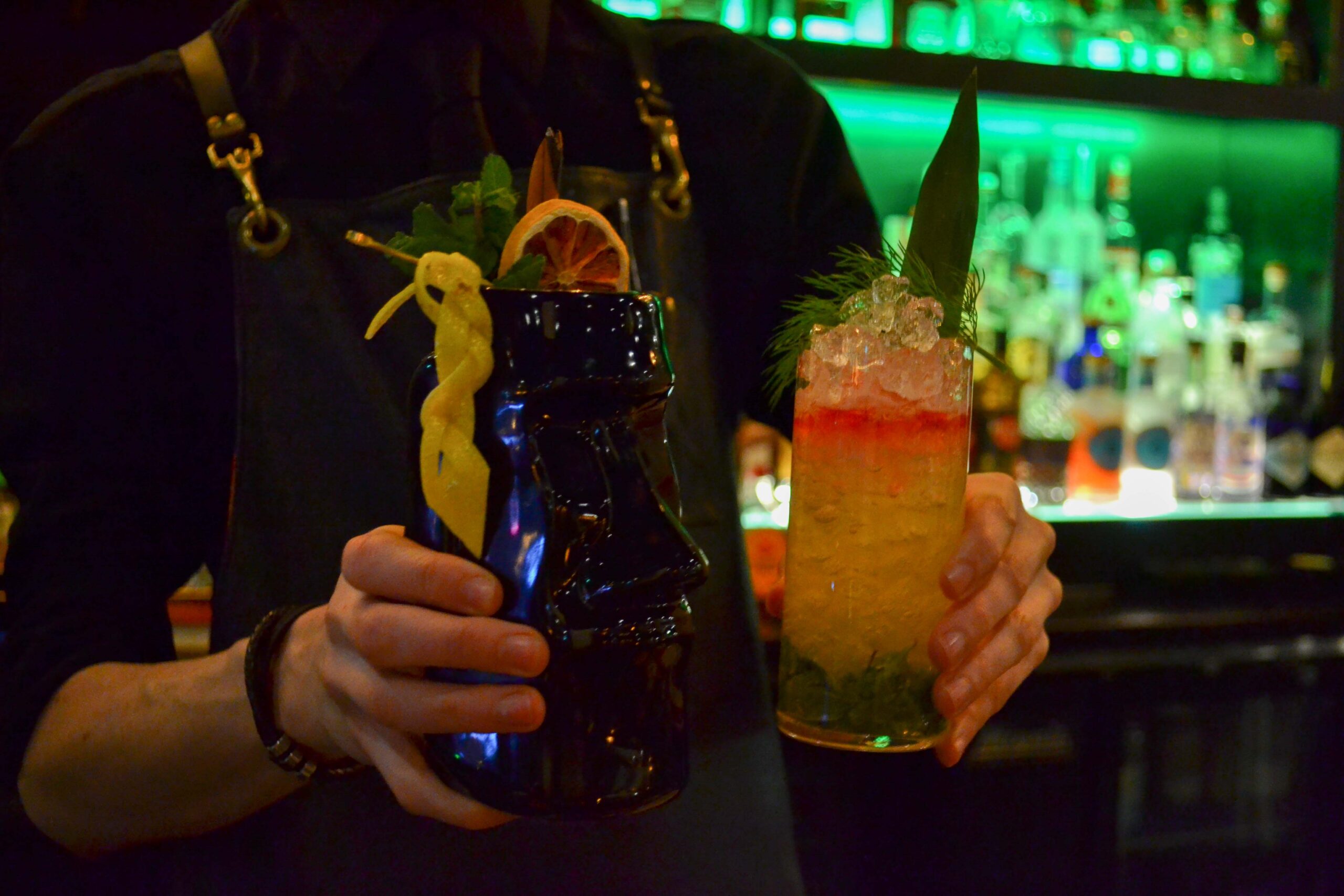 A hard-working bartender presenting two custom-made cocktails at a restaurant in Ottawa.
Photo by: Christina Korotkov

People often ask me when I’ll leave the restaurant industry (or simply “the industry,” as it is commonly referred to by those who work in restaurants). In all honesty, I won’t. When I graduate from journalism school at Algonquin College, I’ll continue to serve, and when I find a job in my field, I’ll still be here.

The pandemic scared a lot of industry workers away; 250,000 people according to this study by The Monitor. Many scurried to find an office job or anything that could provided a sustainable income. I welcomed my layoffs that came with each lockdown, taking the time to rest my body and decompress from years of rushing to bring table 50 their bottomless Diet Coke refills.

Waking up on a Sunday morning, I found that my feet and back didn’t ache from the Saturday night shift. It felt good and didn’t encourage me to find another job.

Those newly vacated positions were soon filled by fresh faces begging to start their first serving job after working endlessly in takeout or hosting. It’s normal to work several months, or even a year, as support staff before being promoted to serve.

If you’re not in the industry yourself, you’re probably wondering why anyone would subject themselves to getting yelled at repeatedly over the phone about how the restaurant isn’t taking reservations between 5 and 7 o’clock or hearing the anger of someone asking why the wait for takeout is an hour long.

There’s nothing glamorous about reaching for a guest’s used cutlery and empty plates at the far end of the table.

That part isn’t alluring, but what is, for me, is creating a positive experience for my guests. They didn’t have to come into my place of work, they could’ve gone anywhere else in the city. But they chose based on what they were craving to eat, or how it’s a new restaurant in the city they added to their list of places they needed to try. When they sit down at their table my goal is to make sure they enjoy their experience.

At the end of my service, when I’m taking back the debit machine, I’m not looking to see how much you tipped me. I hold the machine in a way that when I’m ripping off the printed receipt and handing it to you, I’m thanking you for coming in and wishing you a safe trip home. I promise, you will have my full attention until you walk out the front door. I hope you tip me for my service, but you don’t have to. On behalf of my co-workers who I share my tips with, I am extremely thankful when you do.

I cannot reiterate how much I love my work and learning from my coworkers, but in a society where tipping is the norm, it’s hard to imagine what might happen to my income when the minimum wage increases in the new year.

I don’t think people will stop tipping. I think the people who are up in arms against tipping are the same people who don’t tip already, or tip poorly based on a server’s standard.

I’m not alone in liking my restaurant job. Kathryn Scobie is a 21-year-old student at Algonquin College who serves at nearby Chances R, and who also plans on staying in the industry when she graduates from college.

“The money is pretty good, I really hope I can balance having the two jobs after,” says Scobie, who would’ve described herself as being reserved and introverted before she started serving tables.

She sees herself being in the industry for another 10 years.

Scobie and I were talking about our own experiences when we go out to eat. She doesn’t go out very often, but when she does, she appreciates it when her server “goes a little bit extra in what they do” and she’ll tip more based on that.

As much as I love being a server, I also love going out to eat. I love experiencing the restaurants Ottawa has to offer and being reassured that my dietary restrictions are not a problem for the chef. It’s been a long time since I’ve had a shitty dining experience and even then, I think it would take a lot for me not to tip my standard 20 per cent.

I’m watching everything when I’m dining out. I can’t help it. I look at the layout of the dining room and how many servers are working, questioning why the lights are so bright when there are candles on the table. Did my server take away the plates when I moved them to the end of the table? Did I have to ask for water refills or were they just brought to me? What about the crumbs left on my table, are they going to wipe them while I finish the rest of my wine? It’s almost ruined me.

But not quite. If anything, working in the industry has taught me to be more compassionate and empathetic towards industry people. My server is a human being doing a job so they can pay their bills. If they’re off their service that night, but still owning their shit – whether it be the good or the bad – I respect that. Your server is working amidst a labour shortage, and God knows they’re tired.

Ana Gorbanova is in her third year of university at uOttawa. She’s studying international relations and has been in the industry for two years, working at St-Hubert in Orleans.

“I think tipping could be done with if the wages were higher,” she says. “But $15 is definitely not nearly as high as we need it to be, especially with living costs.”

Through the pandemic she’s been in and out of the industry as lockdowns would have it. She’s serving right now because it’s nice to have that little bit of extra pocket change while she’s in school.

“I just find it’s the best bang for my buck,” says Minty.

Tips are a big part of it for many in the industry, but I hope guests know that some industry workers put a lot of passion into what they do because they genuinely care about your experience. The ones fueled by passion haven’t left and they don’t plan to anytime soon.