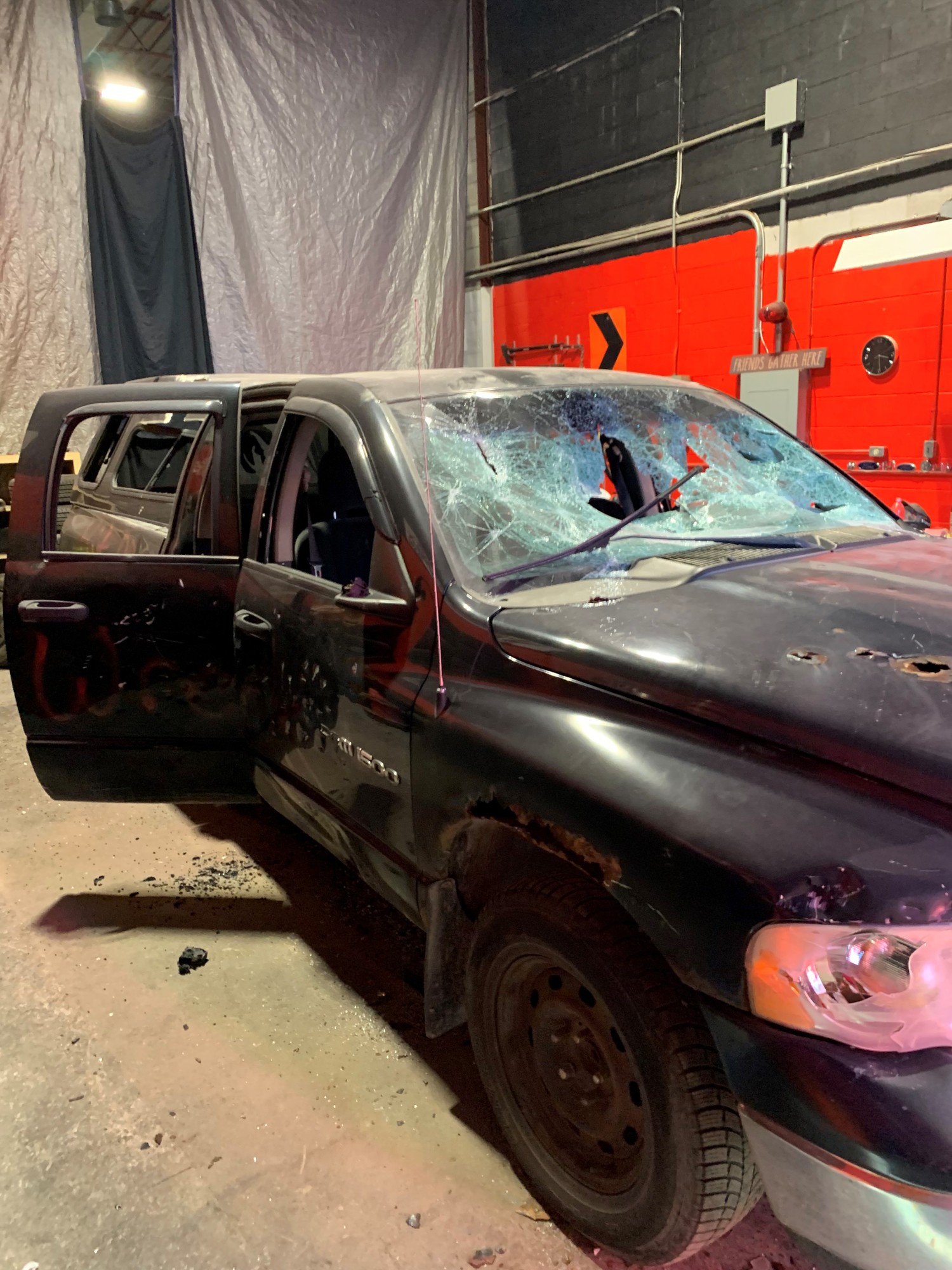 Cars and SUVs are just a few of the things you can smash and bash at Ottawa's Wreck Room.
Photo by: S. Kennedy

I am gripping the edges of the keyboard so hard that I can feel them digging deep into my palms, the cord dangling down from one side. I reach out and grab the cord in one fist and swing the keyboard around. Whirling it over my head, I bring it down onto the stack of cement bricks at my feet. As the keys go flying and the plastic cracks, I revel in the truly cathartic grand finale to my epic rage room experience.

Flashing back to two weeks before, I can’t remember exactly what triggered my mental and physical overwhelm – a blinding, red-hot, mind-numbing level of anger – but it was likely an accumulation of pandemic fear for my aging parents’ health and my children’s safety in school, moving to a new city, and seething anger over anti-vax and anti-mask protests. My capacity for coping had sunk to an all-time low.

No amount of yoga, meditation or mindful breathing was going to help me get over this. As a yoga teacher and practitioner, I had tried them all with no success. I felt jittery and restless, almost crawling out of my own skin, pacing the house, looking for a way to let off steam.

What I really wanted was to scream and break something. I needed a safe space, away from prying eyes, where I could vent to my heart’s content, instead of diving into a glass (okay, a bottle) of coping mechanism (AKA, wine) and feeling worse for it the next day.

What I needed was a rage room.

If you have never heard of a rage room, you may have found better ways than I to manage your stress, or perhaps you are so chill that you don’t need it. Either way, this phenomenon is not new. The rage room concept has existed for 20 years, initially conceived in 2003 by a trio of entrepreneurs looking to provide team-building stress-relief experiences for office workers.

Participants were taken to a junkyard in a small town in Spain where they could bash away at cars, computers, and other household or business items. Some participants even brought pictures of their bosses to pin on the cars for motivation.

Jorge Arribas Haro, a co-founder of the business idea, coined this experience Destruction Therapy, or Destructo-Therapy, although there is no clinically recognized therapeutic element to bashing away at pictures of your boss. The medical community has not supported the idea that acting out aggression is a constructive way to purge angry feelings, but the business of destruction therapy has nonetheless grown in popularity around the globe.

One of the marketing challenges facing owner/operators of this kind of business is that participants, although highly engaged in the destruction-therapy activities, were reluctant to talk about their experience afterward. “People did not want to talk about their experience,” Haro once said, adding that participants felt “shame around exhibiting and/or expressing anger publicly.”

I can totally relate to the shame. Ultimately, at the root of some of my pent-up emotions and frustration was the fact that culturally, women are not encouraged to express anger. As I was growing up, my anger was strongly discouraged and I was expected to “grin and bear” whatever life threw at me. Losing my temper, or worse yet having a tantrum, was not considered lady-like, and therefore unacceptable and unattractive.

But anger is an emotion felt equally by men and women. However, male “aggression” is a symbol of strength and leadership in many cases. In her book, Rage Becomes Her, author Soraya Chemaly says that by the time girls hit adolescence, they have already begun to manage their negative emotions because they recognize that “overt displays of anger threaten their safety and success.”

As a mind-body yoga practitioner and teacher, I am intimately aware of the dangers and damage inherent in bottling up or suppressing emotions. In my own experience and that of countless others I have taught or coached, I know that it is counter-productive and painful. But what happens when there is no more room to hold them in?

My own negative energy, emotional and physical, needed to go somewhere. My family was tired of tiptoeing around me and my mad mood, so much so that my son tentatively suggested maybe I try using his punching bag. Bruising my knuckles was not appealing, but his offer made me realize that it was clearly time to let it all out.

Lucky for me, Ottawa has several rage room facilities to choose from, and I picked the Wreck Room in the city’s east end.

The Wreck Room, and other facilities like it, generally bundle and price their services in packages of varying lengths of time and include different items to destroy. The Car Wreck, for example, offers up to eight wreckers two hours to do as much damage as humanly possible to an actual car, at a cost of $400. Other items on the menu include SUVs, drinking glasses, printers, small appliances, wine bottles and even flat-screen TVs.

I opted to go entry-level and try the $50 Wreck Around for 30 minutes, which gave me a bin of small and medium-sized items to destroy. I also requested the keyboard to act as a sacrifice to my work-from-home frustration. Just researching and booking the session was enough to help me calm down a bit, and transformed my anxious, angry energy into anticipation.

On the day of my session, I dressed carefully in long black pants and long black sleeves. Closed-toe shoes and boots are required for safety purposes, and my infrequently used steel-toed boots, also black, were perfect. My appearance mirrored the dark, menacing energy swirling inside of me, as the anticipation caused my adrenalin to rise.

The Wreck Room is tucked away in an industrial park, sandwiched between a couple of industrial offices, and across the way from some kitchen-renovation centres. A stripped-down space with little more that multiple layers of chipped and cracked plywood on the walls of the room and piles of debris and broken glass in the corners, it displayed clear signs of past sessions everywhere I looked.

Any person casually driving by the Wreck Room could likely never imagine the mayhem taking place behind the closed front (or back) door. But if they knew, I bet at least a few of them would want in.

At the time that I researched and booked my session online, I also connected with facility founder and owner Bren Walker, a young serial entrepreneur who was excited to bring the rage room experience to the Ottawa area. He gave me the run-down on what to expect and what would be included in my session. His passion for this business and for the stress-relieving experience it provides, assured me I would be in good hands.

“We are taking care of people in ways that they can’t take care of on their own,” says Walker.

When I arrived, at my appointed timeslot, the waivers were ready to be signed and the box of breakables was all picked out. My son, also a college student feeling some mid-term angst, joined me for the session. With the paperwork out of the way, all we had to do was to choose our weapons and get bashing.

I was extremely, and embarrassingly, tentative at first. Finally face-to-face with an opportunity to vent, the very idea of destroying things on purpose felt foreign and very wrong. As a result, the first pie plate that I threw against the wall didn’t even break. To my utter humiliation, it bounced off the wall and rolled across the floor to land at my feet… mocking me.

At this point, Walker shouted through the open door at the far end of the room to “throw it like you mean it!” His jeering was just the encouragement I needed to galvanize me into action. My next toss was a winner. The pie plate exploded against the wall, and glass chips flew everywhere.

From that point on, I was relentless. I used a golf club to smash a teacup to smithereens. I did my best to destroy a GPS monitor – which was incredibly robust – with a baseball bat. CDs, VHS movies, decorative figurines, vases, nothing was spared my wrath.

With each swing of the bat, club, or crowbar, I could feel my heartbeat speeding up and my breath coming harder. Beneath my mask, beads of sweat started to roll down my face and into my eyes, but I couldn’t wipe the smile off my face. Between shouting and grunting from the effort, I was also laughing out loud because I was having so much fun.

It turns out that smashing and breaking things is hard work, and after 30 minutes of steadily making my way through all my items, I was spent. It felt so freeing to vent so fully, and so physically, with absolutely no regard for being proper or socially acceptable. Smashing the keyboard to bits capped off the session and felt a bit like an act of defiance against my online work and school responsibilities.

I left my session feeling like I had had a good workout. I also felt cleansed in the same way I might have if I had bawled my eyes out for a couple of hours. The adrenalin rush wore off quickly, leaving me exhausted, but the endorphins – the happy hormones – released when we humans exert ourselves had me feeling good. The jittery, anxious energy was well and truly gone.

To be clear, rage rooms or smash rooms are in no way a replacement for anger- management therapy or counselling. If you are chronically angry, or consumed by dark thoughts and emotions, clinical help is your best bet. But smash room sessions can be a useful outlet for folks who struggle to express – and therefore release – negative emotions.

Walker fully acknowledges that rage rooms are for fun, and not a substitute for therapy if that’s what you need. “We have clients who come every few months, or every couple of months,” he admits, “but if we had people here every day, I would be worried.”

Ultimately, “destruction therapy” has more value as an entertainment experience than as an ongoing coping mechanism. Stress reduction techniques, mindfulness meditation and good lifestyle choices are all going to serve you better in the long run.

But, every once in a while, breaking shit is definitely good fun.