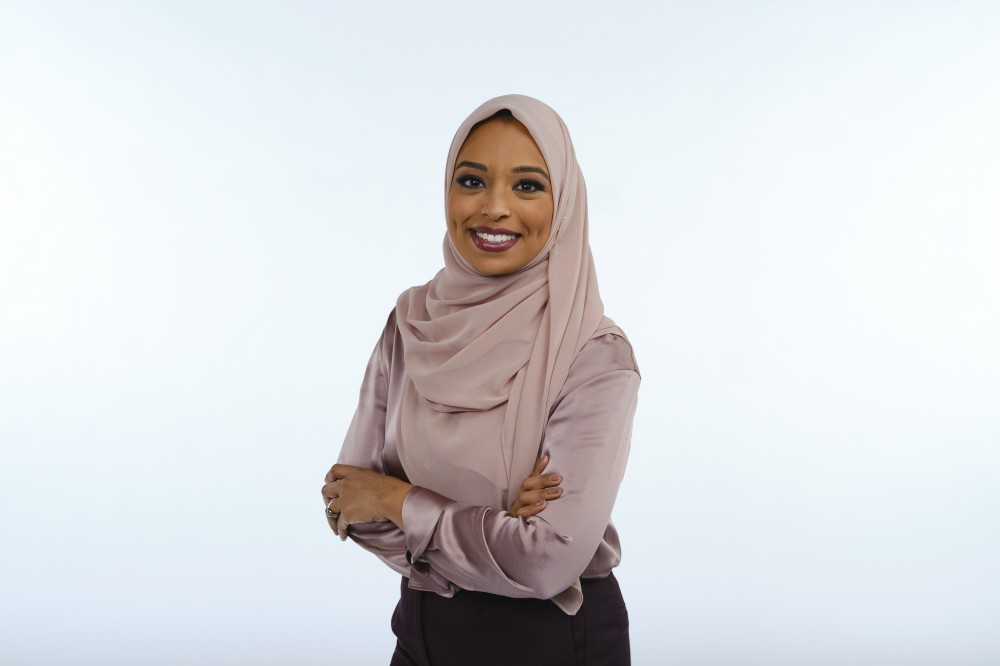 The host of the CBC show Canada Tonight with Ginella Massa continues to break barriers as a Mulsim woman in the field of journalism.
Photo by: CBC

Eager-eyed and full of excitement, I found myself in a room with a group of my favourite people – journalists.

I remember walking into the Chelsea Hotel in Toronto attending my first journalism conference NASH80 and feeling a wave of excitement rush over me. Not only was I in a place full of industry leaders, but it was my first trip alone in a city that I loved, going after what I wanted and focusing on journalism.

When I got my goodie bag, the first thing I did, unconsciously, was skim through pages for women that looked like me – there were three and I made sure I went to all their panels.

When I was younger, I would sit with my dad and we would watch Al-Jazeera. Once you get past all the angry Arab men screaming at each other, it’s not so bad. One night I was watching the news and the anchor, Khadija Benguenna, was reporting the news. The little girl in me was in awe. That’s when I started to dream, but as I got older it got harder.

You might wonder why it matters to see people that look like you in media spaces? Well, when you have walked into many rooms and felt like you are the only one who stood out, it’s hard not to feel like you were the odd one. Although it never stopped me, even though I constantly felt nervous and anxious, the more rooms I walked into, the less daunting it became.

Fast forward to my mid-twenties, sitting in the main hall on the last night of NASH80 as Ginella Massa gave her keynote speech – I felt empowered.

“You know I think back to that night where we met at NASH80 in Toronto, and like those moments are really inspiring for me to see young journalists who are so excited because, you know, I’m able to be the role model that I didn’t have. And that pushes me and makes the hard days easier,” says Massa. 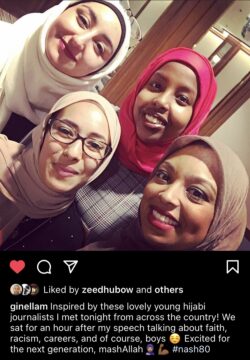 On January 11, 2021, Massa made history by becoming the first Muslim host of Canada Tonight, her CBC primetime news and current-events program. The long-time news reporter and local anchor has been breaking barriers since 2015 when she was asked to fill in on the anchor desk at CityNews and was Canadas first visibly Muslim female anchor.

“The more notoriety I got, the more negative reactions I got, just by virtue of being more popular or being more known, it attracted a lot of attention both positive and negative,” says Massa.

Massa mentioned the way she dealt with criticism was recognizing what she faced was not directed at her journalism but on the way she looked. “And so I learned to kind of separate myself from that because if you have a problem with what I’ve chosen to wear that’s really your problem.”

Massa didn’t always want to be on TV, but it was her mom who inspired her to pursue it and go after what she wanted no matter what. “She was like, this is a career that you do so well in, don’t change or limit yourself just because it hasn’t been done before. She really encouraged me to go after it.”

Wearing the hijab and being a news anchor can sometimes mean you have to work twice as hard to prove yourself. “I have to be held to a higher level of scrutiny,” says Massa.

Massa describes how the industry may sometimes question people of colour for not being able to be impartial or objective. The assumption is that BIPOC or Muslim journalists can’t be impartial observers because they have been impacted by the story.

“It’s our job as journalists to check that bias at the door and be able to approach a story from all sides. And so, it’s funny why we ask certain people whether or not they’re able to do that. And often it’s people of colour,” says Massa.

Sometimes, a journalist will hide behind their opinions about a certain topic but as a Muslim woman, Massa can’t. Before she can even speak you might know her opinion on Bill 21.

Similarly, one of the biggest stories of 2020 is COVID-19. It has and continues to impact everyone around the world, yet no one is being questioned about impartiality.

Massa explains, “We all are intimately impacted by this pandemic, but that doesn’t preclude us from being able to put that aside and tell the story. And in many ways, it actually makes us better journalists because we know what questions to ask and understand what the issues are because we’re dealing with them ourselves.”

People will put you down and question your work because of what you look like, but to all folks who are doing the work, it opens the door for more BIPOC and Muslim journalists to have a chance.

So for me, representation matters because seeing other women that also wear their hijab in the industry has allowed me to be able to manifest it for myself.