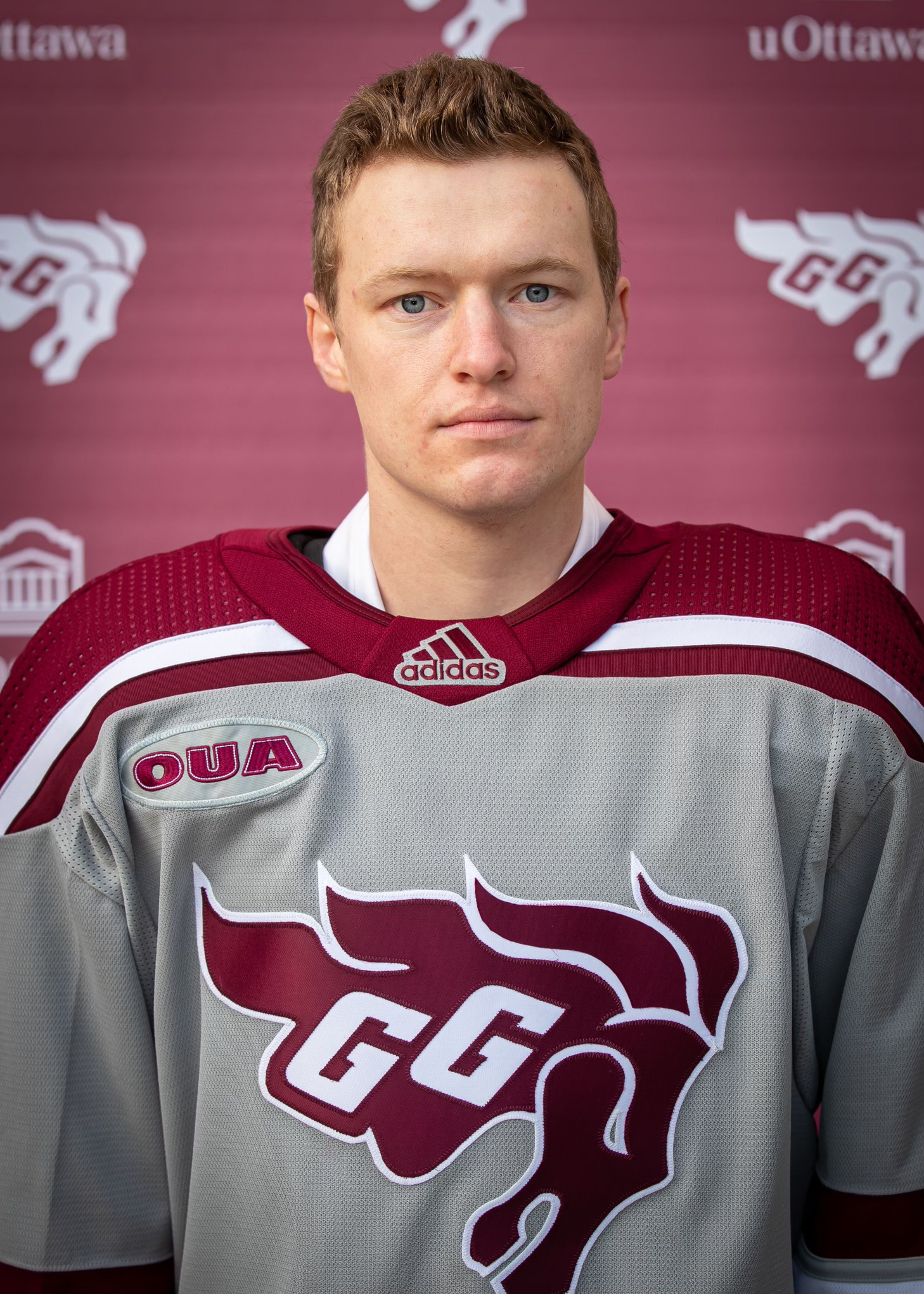 The 2020 season came to a screeching halt for the Kanata Lasers Jr ‘A” hockey team due to COVID-19. Defencemen Liam Markhauser was able to graduate from the team despite such an unusual year in sports.

But, that graduation was just another step in Markhauser’s path. Not only has he excelled academically and made the men’s roster, he’s also had quite the journey along the way with the Gee-Gees hockey team after being recruited from Jr ‘A’ hockey.

Markhauser spent the summer trying to figure out where he’d be staying when the season kicked off. This was before the unfortunate shutdowns of sports in the province of Ontario due to the pandemic.

“It’s been crazy,” says Markhauser. “It’s been an experience that I didn’t think would ever happen. I had the summer and I was kind of optimistic. I was like ‘Okay, I’ve gotta start looking for apartments for the next year.’

In pre-pandemic times, the Gee-Gees had frequent practices, a concept that seems far from reality now.

“It started off relatively normal. We practiced a lot, we worked out for about four or five times a week for about three weeks,” says Markhauser.

The next few months saw Markhauser being able to practise with only players from his pod.

According to Markhauser, the pods were used for workouts, on-ice training and sharing a dressing room. The University of Ottawa also did pods for players who lived together or would carpool throughout their day.

Even when they were able to practise before strict guidelines were set by the provincial government, players were only allowed to practise with the teammates from their pod in separate ends of the ice.

“I was in one corner of the ice with my pod, and then the other pod was in the other corner,” describes Markhauser.

Along with meeting only some of his new teammates on a more personal level, Markhauser explains that the two months they spent together was great, but also odd.

“Us five (Anand Oberoi, Keenan MacIssac, Anthony Poulin, Branden Makara, and Yvon Mongo)…We’d be in our workout pod, we’d be on our ice pod, and we were the only ones there to really hang out with each other. It was kind of weird. I didn’t get to meet the team until December when we all really met each other.”

The team was also split up into two different practice squads, both of them being in separate locker rooms.

It’s now February, and the Gee-Gees 2020-21 season has indefinitely been cancelled. Markhauser says the team now spends most of their time on Zoom.

“It’s just been Zoom calls since December,” he explains. “We haven’t really been on the ice at all. The last time I was on the ice with them was mid-December.”

Recruitment is a big thing for players graduating from Jr ‘A’ hockey, and Markhauser believes his previous coach in Kanata, Dave Leger, had something to do with it.

“I think he’s to thank for even getting me to uOttawa,” explains Markhauser. “He obviously coached uOttawa before and I think he had some connections there. I never really chatted with him about it, but I think he might’ve had something up his sleeve to get me there.”

With no sports being played, Markhauser has excelled when it comes to his academic grades. He’s a first-year student in the Bachelor of Arts (Communications) program with a minor in business.

On Jan. 26, the Gee-Gees Twitter account celebrated Markhauser having the highest GPA on the men’s team – a whopping 9.4.

“Even when we were in our pods, it was really nice to have a strong structure,” he says. “Every morning we’d be done with practice, done with workouts before 10 a.m. It gets you out of bed, it gets you on your feet. I think it’s nicer to have structure; it keeps you organized and it keeps you on top of your schoolwork cause you know that you have four hours after lunch before another class, and I gotta study this and get this done.”

In terms of workout regimens, Markhauser is impressed with how the coaching staff has dealt with these times and making sure the players know what they’re doing.

Markhauser and his teammates have Zoom meetings every week on Tuesdays and Thursdays that usually run for 40 minutes. Players then log all of their workouts in an app on their phones.

For players who might not have the proper workout equipment at home, the Gee-Gees training staff have tailored workouts for them too.

Markhauser explains a new regimen that the team has been trying, known as “Joga”.

“You’re holding yourself up the whole time,” says Markhauser. “You’re doing these weird poses and stretches. It’s really, really tough. You get a good sweat going.”

Considering the limited time he’s spent on the ice with the Gee-Gees so far in his USports career, it’s been a rollercoaster ride for him.

“It’s tough,” says Markhauser. “I think we miss hockey, we miss the locker room. Even when we were in pods, you had to show up to the rink fully dressed and you couldn’t shower after; it’s those little things that just get taken away from you that you don’t realize until later.”

While this season is a lost cause for Markhauser and the Gee-Gees, he hopes that he will be able to return to some form of normalcy and practise with his team again after lockdown restrictions are lifted.