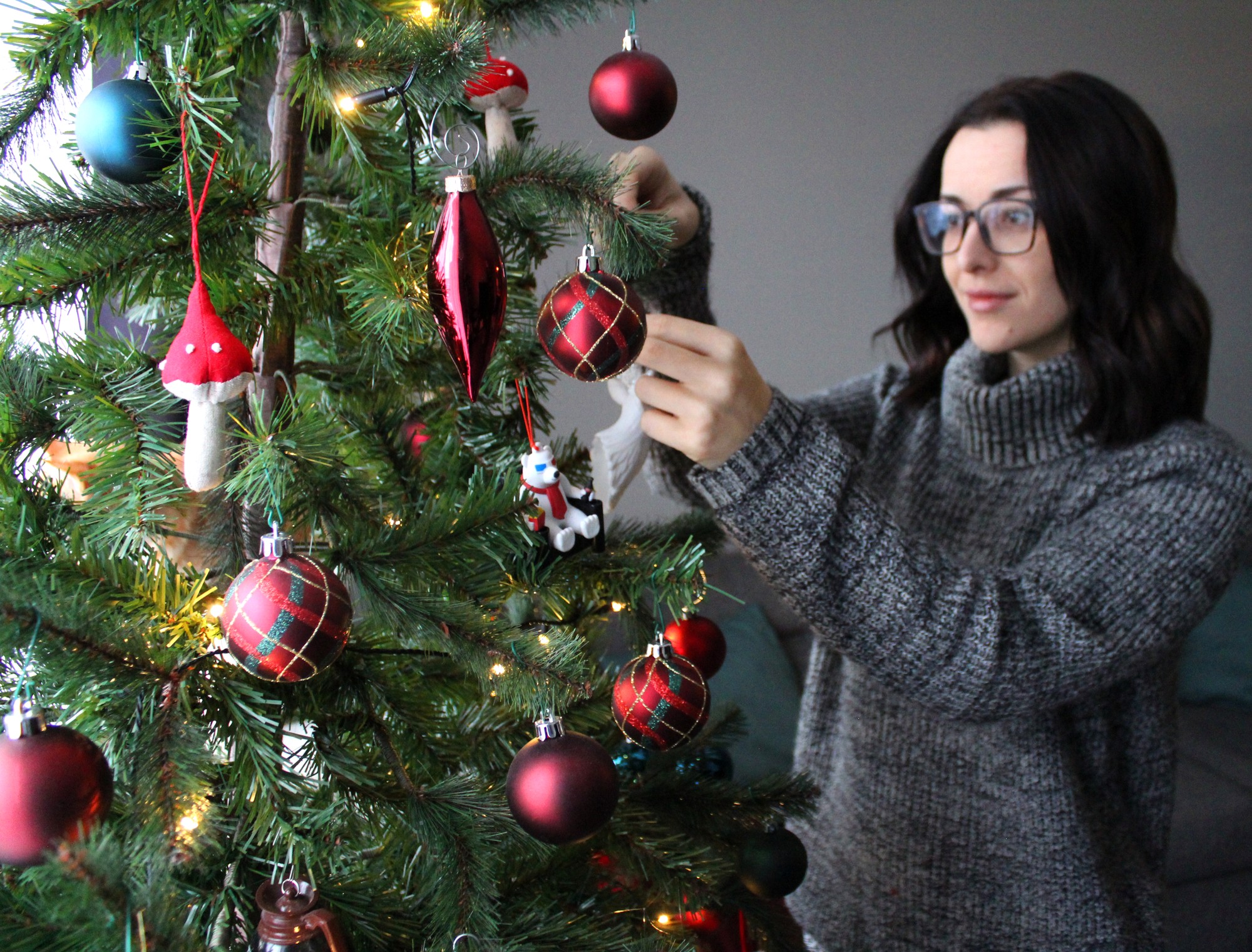 Last year, when a complete stranger asked me if I was going home for the holidays, I told them that I was staying in Ottawa because my parents live abroad and I am an only child.

Truthfully, on a sunny day when the roads are clear, my parents are just a 45-minute drive away from the city. I also have two siblings. But my made–up story always saves me from the awkward silence and confused stares I get when I share my actual situation: I’m estranged from my immediate family.

I choose to live my life without seeing my family at all – not even during the holidays. And turns out, I’m not alone.

The first week of December, college students count the days until their final exams and have their bags already packed in the corner of their room ready to reunite with their family.

I imagine them pulling up in the snow-filled driveway of their childhood home, lit up with the same lights they helped their dad put up when they were kids.

The family dog is running in the yard excited to see their human sibling while their loving mother is waiting for them at the front door with a hot chocolate.

But for many of us, it looks very different than this typical Hallmark movie Christmas scene.

I met Henri Snow (his name has been changed), a hospital worker in Ottawa, and later found out that he has been estranged from his father for seven years. He will also not be going to his father’s home for Christmas.

“In the first few years, the holidays were difficult,” Snow said. “You know, it’s that Hallmark picture of the matriarch, the patriarch and the siblings, but society has evolved, while that picture has not.”

Snow, 27, considered reconnecting with his father during the holidays in the past but it was never what was best for him.

“It’s like that holiday family image that makes it hard because it has not caught up with the times,” Snow explained. “There are single parents, kids that are orphans, adoptive parents, same-sex parents, estranged people who see their friends as their family… so we see stereotypical families during the holidays and we constantly see what we don’t have, as society projects what we should have.”

Snow’s father was an alcoholic. The trauma that this abuse brought on affected Snow’s well-being until he felt like cutting ties from his father was the best thing to do.

“My father would drink from sunrise to sundown and was a master manipulator,” Snow said. “Since I’ve been estranged, I have a positive self-image, I cope better and I have made peace with it.”

Estrangement is a complicated situation that is surrounded by shame but is far more common than we think.

The holidays will look and feel different for most of us this year as we are currently amid a global pandemic. But for estranged adult children who already feel isolated, it may be especially difficult.

Every estranged adult child has their own personal reasons why they made the difficult decision to live their life emotionally distanced from their biological family system or a key member.

“Nobody really chooses to estrange themselves or cut someone out of their lives,” Snow said. “It comes down to either choosing a toxic relationship or choosing to protect yourself.”

There are ways you can support your estranged friends. Reminding them that they only have one family and they may regret their decision someday is never the way to do so, though it is something estranged children hear all too often.

“I often hear ‘well he is still your father,’ but people don’t know how bad things were, they didn’t live with him, I did,” Snow said.

Dr. Megan Gilligan is a sociologist, gerontologist and professor at Iowa State University. She explained that sometimes, having those boundaries and being estranged is a much better option for a person’s well-being than forcing themselves to stay part of a toxic family system to conform to social norms.

“In our work, myself, Jill Suitor and Karl Pillemer studied over 550 mothers with two children or more,” Gilligan said. “We found that about 10 per cent of them had at least one adult child that was estranged, which was a higher percentage than what we were expecting.”

But based on Dr. Gilligan’s observations and conversations with estranged mothers and their adult children, she believes the statistic is much higher.

The study, published in the American Family Physician journal, looked at societal norm violations, such as legal troubles and substance abuse, as occurrences that could lead to adults being estranged from their mothers. They also looked at differences in values between the mothers and their children as another possible gateway to estrangement.

“That was one of the very interesting findings,” Gilligan said. “We expected maybe both things to be associated with estrangement, but the societal norm violation did not predict estrangement at all, in fact, we found evidence that in those cases, mothers would reach out to those children that they felt needed additional support.”

On the other hand, family norm violations and shared values between the mother and adult child were a strong predictor of estrangement.

Gilligan said that differences in personal belief systems, principles and values between a mother and her adult child were most often the case of estrangement in her research. “Core values and beliefs that came up a lot were partner and martial choices, divorces, marital transitions, religious beliefs, breaking tradition, sometimes things that had to do with jobs.”

In other cases, like Snow’s, estrangement stems from childhood trauma; children who were emotionally, verbally, physically, psychologically or sexually abused, witnessed that abuse and/or grew up with parents who were alcoholics or drug users.

As communities work towards eliminating the stigma surrounding mental health and encourage victims to speak out and come forward, abuse victims opt for estrangement when the abuser is a key family member.

“The mental health movement is part of why estrangement is becoming more and more common,” Gilligan said. “We are more open and we acknowledge that our mental health is an important part of our well-being. Our studies have shown that an adult’s relationship with their parents and siblings has as much of an impact on their depressive symptoms than the relationship with their spouse.”

Stand Alone is an organization in the United Kingdom who focuses solely on estranged and disowned members of families. Their primary objective is to “break down the stigma around estrangement and support estranged people in their daily lives.”

Stand Alone offers resources to college and university students who are estranged from or disowned by their families.

A study by the Stand Alone Pledge charity found that 41 per cent of the estranged students had considered withdrawing from their course because of money worries, stress and mental health issues, with 14 per cent following through with this.

Another study by the Centre for Family Research at University of Cambridge and Stand Alone found that among the 807 estranged candidates, 80 per cent found that there were positive outcomes to their estrangement such as feelings of independence and freedom.

Of the group, 68 per cent found there was a stigma surrounding estrangement and described feeling judged, feeling as if they were contradicting societal expectations and felt there was a general lack of understanding about estrangement.

Ninety per cent of the estranged group felt the holidays were especially challenging times.

“My advice to estranged students is to respect what is good for you,” Gilligan said. “Not a lot of the families we studied were seeking out reconciliation so know that if that isn’t the right option for you, you can seek out other relationships that feel good like a group of friends, your partner, an aunt…”

“We need to understand that families who have an estranged member are most likely families that need these boundaries between members,” Gilligan added. “We need to know that this is sometimes what is best for some people and we need to honour that and respect that.”

Gilligan also reminds us that there are lots of other families and people going through this, that it’s ok and sometimes, it’s very necessary.

So what I should’ve said to that stranger is that my home during the holidays is not a physical place but a feeling in my heart that I create.

My home comes with difficult boundaries and emotional distance from my immediate family. But it also comes with a loving partner, two dogs and a big orange cat that loves our Christmas tree.

It’s a small, cozy, one bedroom apartment in east Ottawa by a park with an outdoor skating rink. It’s spending Christmas morning at the Children’s Hospital, where I work, and making a difference in my community.

It’s coming home to a place where I feel safe and loved unconditionally.

And to me, that makes for a great Hallmark movie.