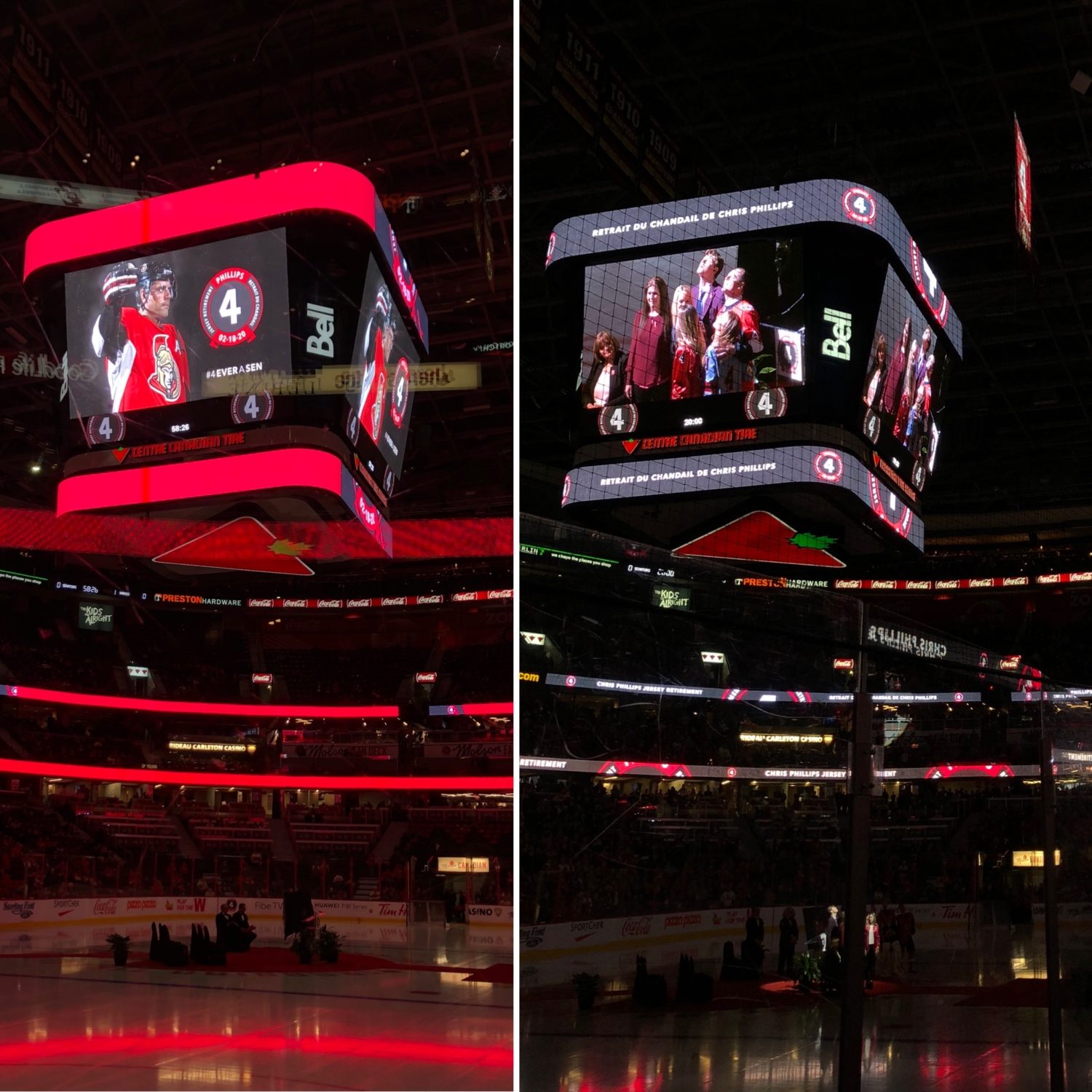 On most evenings, Ottawa Senators games at the Canadian Tire Centre aren’t exactly sellouts. What is usually a sea of red, empty seats was instead a raucous crowd of fans who put aside their disdain towards the current state of the franchise to pay tribute to the longest tenured player in franchise history.

Chris Phillips, known by Sens fans and NHL players as the “Big Rig,” was honoured on Tuesday evening as his jersey was officially retired and brought to the rafters before a 7-4 win against the Buffalo Sabres.

Having been a fixture on the Senators blue line throughout the most successful stretch in the team’s modern history, many fans hold happy memories of Phillips—most notably of his steadying presence during the team’s 2007 Stanley Cup appearance.

Back then, current post-secondary students who are now in their 20s were young and impressionable fans. Having grown up watching Phillips play, it comes as no surprise that some felt the need to come out on a weekday evening to show their appreciation for him.

One such fan is Victoria Gauthier, a University of Ottawa student in communications and political science, who thinks of Phillips as one of her favourite players.

“I remember being in my bunk bed as a kid and my dad got me one of those tiny televisions with the antennas so that I could watch some playoff games,” Gauthier recalls. “I would actively be listening for [Phillips] specifically—he was one of my favourites.”

For Nathan Wichers-Schreur, a paralegal student at Algonquin College, Phillips embodies what the Ottawa Senators franchise should strive to become.

“I’ve always been a big Chris Phillips fan, he’s always been a very solid player for us,” says Wichers-Schreur. “He’s somebody you can always rely on and he’s just a really good community guy, I’ve never heard a bad thing about him, and he represents what I view as being really important for the [Ottawa] Senators.”

“I remember him back in ’06 and in ’07 during that [Stanley] Cup run—he was essential to the team back then,” says Lima. “He’s just a great hockey player and a great guy for the community.”

With Phillips having played all of his 17 NHL seasons with the Senators, fans of every age showed their love for the Big Rig, and he made sure to let every fan know that the feeling is mutual.

“Lastly, [I want to thank] all of you,” said Phillips in front of the whole arena. “On a night where I’m surrounded by family, friends and the community of Ottawa, I’m again at a loss for words to tell you how much this means to me. I will be forever grateful, forever honoured, and most importantly, forever a Senator. Thank you. Merci.”