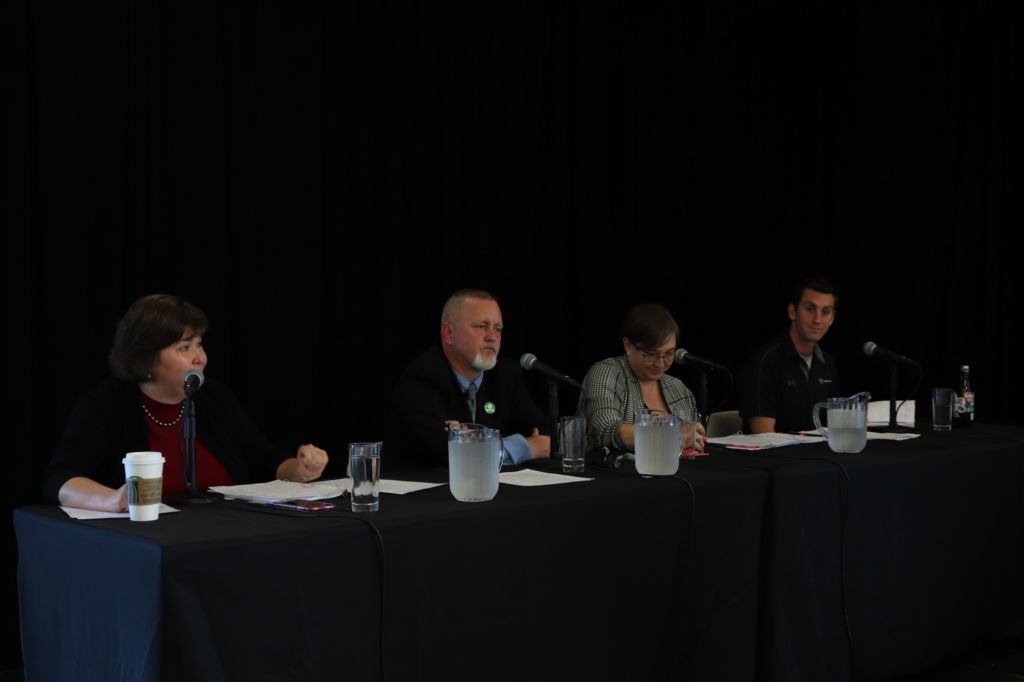 Federal election candidates for the Ottawa West-Nepean riding attended a debate in the Algonquin Student Commons on Thursday, Oct. 10.

Climate change, the economy and Indigenous quality of life were the most discussed issues during the meeting. Current Member of Parliament (MP) Anita Vandenbeld (Liberal), David Stibbe (Green) and Angella MacEwen (NDP) were present to debate the issues.

Speaking to student members of the audience prior to the debate, a few have said they wanted climate change to be discussed. The MPs proceeded to do so.

Vandenbeld said the Liberals are phasing out coal by 2030. They are proposing a clean fuel standard that she said is going to take away about 11 million cars a year off the roads. The clean fuel standard, set by the Liberal government in 2016, aims to reduce 30 million tonnes of annual reductions in greenhouse gas emissions by 2030. Vandenbeld said they will exceed this goal, being two thirds of the way there.

“It’s not about how you get the fossil fuels to the market,” said Vandenbeld. “it’s about reducing the demand for fossil fuels.”

The Liberals gave $12 million to Loblaws to retrofit their fridges, which Vandenbeld said is equal to taking 50,000 cars off the road every year.

MacEwen criticized this Liberal action, drawing applause from a couple of the audience members. She said that they could have bought the fridges themselves.“

They didn’t need you, as the government, to give them that money,” said MacEwen. “That’s ridiculous.”

According to MacEwen, the NDP’s climate plan is to put creating jobs and making life more affordable hand-in-hand with lowering carbon emissions. She said her party’s first step is to take all public buildings and retrofit them to lower the public’s energy cost.

For individuals, the NDP would apply Manitoba’s Pay As You Save financing. PAYS is a financing firm that has the utility provide a loan for retrofitting that will be paid back over time on the utility bill.

MacEwen said that for individuals, the upright cost is the expensive part. She said tha this service will create jobs in retrofitting, as well as lowering the individuals energy costs.

The Green Party will make investments that will turn Canada into world leaders in the green technology sector, according to Stibbe. He said these investments would be in wind, solar, hydro and thermal energy.

“That will create a massive amount of jobs,” said Stibbe.

He said his party will also stop subsidizing the oil industry and put the $16 billion into other economic programs that he says are more important at this stage.

The candidates then moved on to talk about the economy, with affordability and job opportunities for students and graduates being at the forefront of the topic.

Stibbe said that Canada should implement free tuition like some European countries have done. He also said that, with free tuition, those who are older can go to school without worrying about their part-time job or debt.

Vandenbeld said that jobs are people’s number one concern. Her federal party invested $22 million in Algonquin’s DARE District. She said the investment is giving the students the ability to network with businesses, to get their innovative ideas out, and to graduate with the skills to get into the workforce.

“I believe that the number one issue really is the economy,” said Vandenbeld. “and affordability yes, but making sure that we have the jobs in the future.”

MacEwen said that productivity is going up and wages are going down. Although unemployment is down, she says people are have less recreational time. People also need to work more hours, paid and unpaid, to take care of their family – according to her.

“To be able to afford the same quality of living that we had 20 years ago,” said MacEwen. “you are finding that people are giving up stuff that’s unpaid.”

Issues about Indigenous people were brought up during the debate as well. Candidates were asked what they planned to do to demonstrate commitment to the Truth and Reconciliation of Indigenous people and Canada Relationships.

The NDP representative mentioned the possibility of wanting to disband the Senate because of this.

“It’s inexcusable that the federal government is, again, taking children to court in order to avoid paying for their healthcare bills,” said MacEwen, adding to her point about the government’s negligence regarding Indigenous people.

David Stibbe said he voted Liberal in the last election, but has been disappointed in the party’s actions against the Indigenous people. He said Trudeau was “immature” to throw one of his Indigenous leaders under the bus and kick her out.

Stibbe also said that, regardless of the party in power, promises have always been made on topics such as water in the reserves, but were never fulfilled.

“Having clean water in a reserve everywhere is a fundamental right,” he said. “It actually pisses me off that they don’t solve the problem.”

Anita Vandenbeld rejected Stibbe’s statements. “This are all the things that we have precisely been doing in the last four years,” she said.

Vandenbeld said that the United Nations legislation was rejected by the Conservatives in the Senate. She added that every single child will be compensated, saying 99 per cent of those children have already been.

The Liberals have lifted 87 boiled water advisories, and will remove another 50 by 2021 – according to Vandenbeld. She added that her party built infrastructure, such as schools and hospitals, for these reserves.