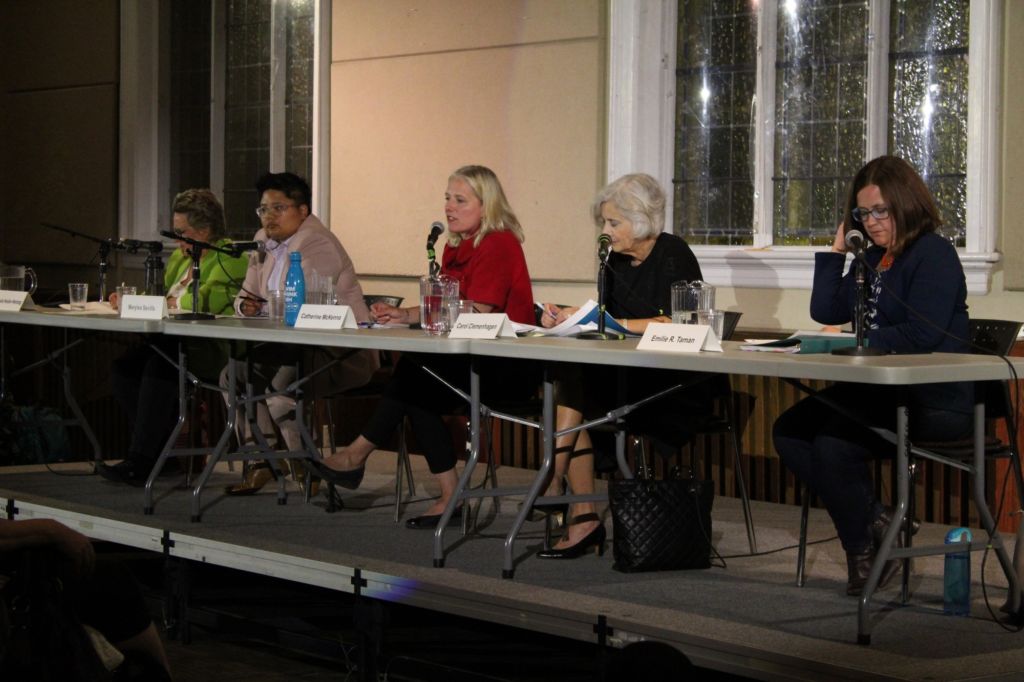 According to CBC, Ottawa Centre had the highest voter turnout of 82.2 per cent in Ottawa, during the 2015 federal election. The riding saw hundreds of local residents participating in the debate. A total of 400 seats in the community centre were fully occupied within 10 minutes after the door was open. Outside, about a hundred more people were still surrounding the building.

Candidates from five parties discussed their own solutions for various issues including climate change, aid for indigenous people, immigration, housing and healthcare.

Issues like climate change and housing have received considerable attention among students in the riding. While climate change was seen as essential, housing problems is another topic that students considered as what heavily affects their daily life.

“As a student, when I graduate and go to work, housing is going to be important to me,” she said.

During the debate, all candidates expressed their thoughts on solving housing problems.

Conservative candidate Carol Clemenhagen said that it was essential for the municipal and federal government to coordinate with each other and facilitate the progress of the construction of affordable housing.

Emilie R. Taman, the candidate of the New Democratic Party, said that affordable housing is one of the top issues that is coming up in Ottawa Centre next to climate change. She used an example to underscore the severity of housing problems.

“In Ottawa right now, it’s absolutely out of control,” Taman explained. “I met someone who is renting a balcony to sleep on, in a G7 capital. It’s completely, completely unacceptable.”

What Taman described as a serious issue resonated with Carleton journalism student Herman Wong. He said he found the rent getting more and more expensive.

“Anything that has to do with housing, or even with the bills that I have to pay for hydro or electricity, it really has a big impact, not just for me,” said Wong. “One of my friends had to move from her old place because her family couldn’t pay the rent. It’s very hard for me to see other people that I know to suffer from it.”

Taman suggested that the federalgovernment should acquire and utilize empty buildings and convert them into housing. She also brought up a rental subsidy program in the short term to ensure that while people wait for new housing, they don’t have to bear too much financial burden.

Incumbent Liberal candidate, minister of environment and climate change, Catherine McKenna proposed that her party would use more federal lands to build affordable housings on.

The candidate from People’s Party of Canada, Merylee Sevilla, offered a similar approach. She said LeBreton Flats, which is federal property, could be exploited in the construction of affordable units.

“If I were elected, I would find sponsors and builders and say, let’s create affordable housing here,” said Sevilla.

Sevilla pointed out that the prime location of LeBreton Flats, which overlooks Ottawa River, would enable those who need affordable housing to better experience the city instead of having to live far away.

Despite being booed when she spoke on several issues during the debate, Sevilla’s statement received some cheers from the audience.

Green Party candidate Angela Keller-Herzog criticized both Liberals and Conservatives’ policies for affordable housing. She said both parties wanted to give public lands over to private interest, while getting very little back in return.

She suggested that the land should be put into a public trust, which would gain long-term benefits for the public by providing affordable housing through co-op and nonprofit co-op.

Despite having different strategies and solutions to address the problem, candidates all agreed that solving the housing issue is a priority for Ottawa.

Although candidates have spoken extensively on a number of key issues related to students during the debate, some wanted them to touch and go deeper onissues like education. Herrera is one of them.

“A lot of elites are just looking for short-term benefit, but not education for the youth,” said Herrera. “If the government doesn’t look at the youth, I think the country would collapse.”

The federal election will be held on Oct. 21.