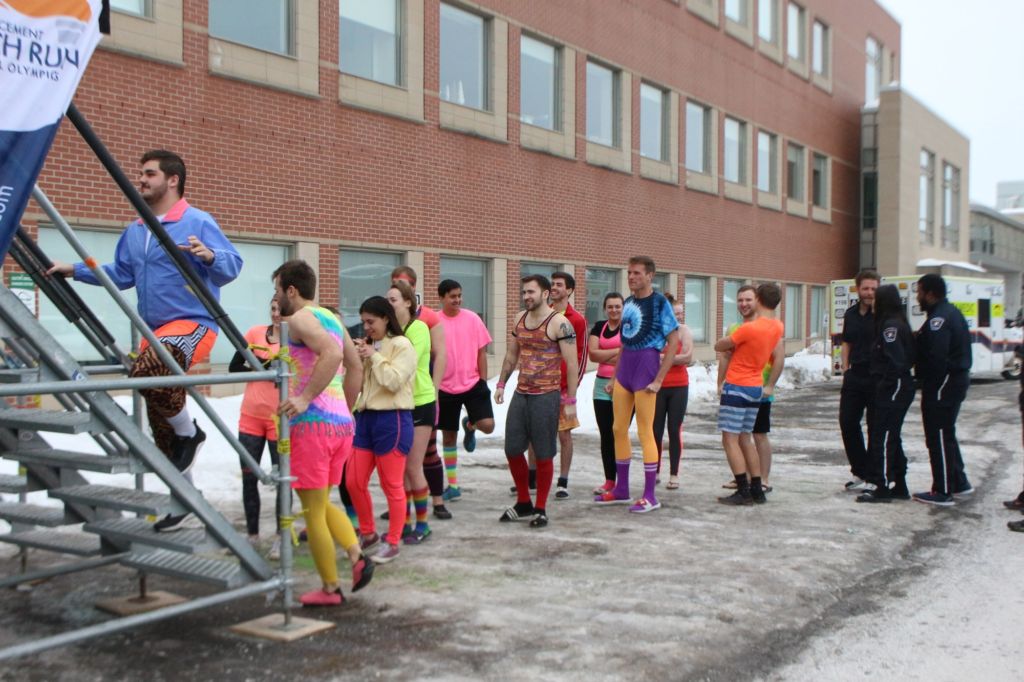 The “plungers” stand at the edge of the metal platform, some in bathing suits, some fully dressed, most of them looking down nervously into the green Waste Management bin full of freezing water. Two divers from the Ottawa Police Services marine dive and trail team, all suited up in dry suits, encourage the “plungers” to jump. Then they do.

There were solo plungers, plungers who jumped in groups and then there is Kyle Dowd who took the plunge three times in a row. His bright Hawaiian shirt clinging to his freezing chest.

“Three times was more than satisfying,” says Dowd, the co-chair for Special Olympics Ottawa. “It was very cold the first time but by the time you’re done the third one your body’s not feeling the cold.”

The 15th annual Polar Bear Plunge to help raise money for the Law Enforcement Torch Run for Special Olympics was held at Algonquin College on March 2, 2019.

This year’s Polar Bear Plunge event raised just over $22,000 and saw over 100 plungers jump into the bin of freezing water. This is the fourth year it has been held at Algonquin College.

There were quite a few jumpers and teams that included first responders from many organizations around the city. One of them was the Carleton U Freezing First Responders.

They are a group of 24 students lead by Alison Forster, a third-year criminology student at Carleton University, who heard about the event from a special constable and thought it would be fun to put a team together. Out of the group, 20 people jumped into the frigid waters and together they raised $1,095.

Tim O’Brien, who plays for the Ottawa Spartans Special Olympics floor hockey team, has been jumping into bins of freezing water for about four or five years and he is proud to support the organization that makes it possible for him to compete.

“Sports is basically physical and it’s good exercise,” says O’Brien. “I’m also in power lifting so it’s being able to have an opportunity to get out on weekends to play with your teammates.”

For today’s event, O’Brien raised $700. Since he has started doing the Polar Bear Plunge he has raised around $2,000. His boss, Jeff Robinson, who owns a number of McDonald’s franchises around Ottawa, was there to support him and cheer him on as he stepped up onto the metal platform to take the plunge.

Another recognizable face in attendance was Catherine McKenna, MP for Ottawa Center. She used to be a competitive swimmer and was very enthusiastic about supporting the Special Olympics fundraiser. She jumped with police chief Charles Bordeleau of the Ottawa Police and a Youth Services Ottawa representative. They issued a challenge for Prime Minister Justin Trudeau to come out next year and take the plunge.

“Being involved in sport is a huge part of their identity as we heard from Tim [O’Brien],” says McKenna. “It gives them a lot of confidence and they’re very proud to be competing and I think sport is a great equalizer.”

When asked if she would do it again, Forster says “I’ll be back next year.”