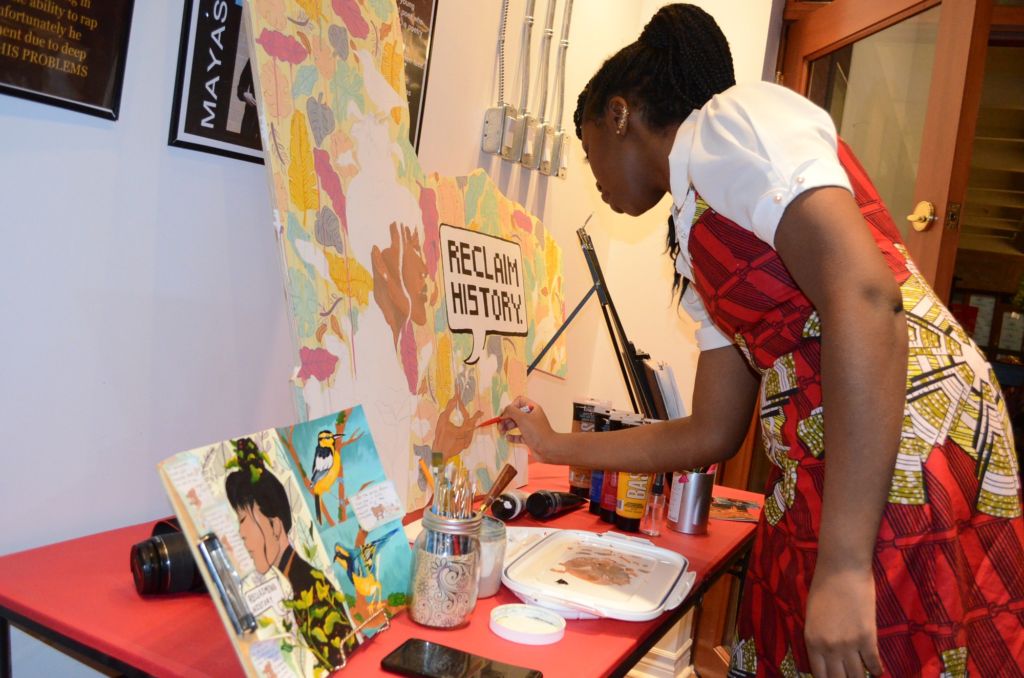 Former Governor General Michaëlle Jean looked on from the front row as Hasina Kamanzi live-painted a canvas that read, “Reclaim history.” The visual artist and uOttawa law student says the piece was inspired by politician Maxine Waters’ “Reclaiming my time.”

During CBC Ottawa and Youth Ottawa’s event titled Black Legacy: True Youth Stories, she, along with seven young artists, shared their individual experiences through speech, storytelling and song. During the showcase and discussion panels, they spoke of times when they felt misunderstood or like a fish out of water.

Kamanzi, whose family hails from Burundi, spoke about feeling underrepresented in the media and in her environment while growing up. She developed an appreciation for manga and anime and learned to illustrate. Now, she makes Afrocentric art for others like her to identify with.

CBC journalist and moderator Adrian Harewood spoke about the importance for more spaces like these, which serve to give a voice to otherwise unheard youth.

“I think it’s always important to shed light on young people,” Harewood says. “It’s always important to provide an opportunity for them to showcase their skills, dreams, their passions, their stories. I think it’s incumbent upon organizations like CBC, like Youth Ottawa, to amplify those voices, to provide that kind of space, to reflect the community back to itself.”

For someone like Saeed Babalola, a Canadian-Nigerian athlete, it was a chance to speak up about his own personal battle concerning his sense of self. In a poem, Babalola admitted to struggling to feel connected to his Nigerian heritage while living in Canada. Something he counters by learning to speak Yoruba, eating traditional foods and wearing the country’s garb. He also spoke about wanting people to be able to look past his build and see him as more than just a basketball player.

While Babalola told a story of grappling to find his identity, Zaineb Muse spoke about assuming hers. In her speech, she spoke about coming to Canada from Nigeria at 15 and becoming an entrepreneur like her mother and grandmother, at 19. She’s since founded two companies and sits on the board of the Bluesfest’s diversity inclusion committee. Muse wants to help empower aspiring artists and entrepreneurs with the tools they need to succeed.

Much like Muse, Harewood also feels strongly about reaching out and giving voice to the youth.

“I think sometimes, older folks have a tendency to dismiss the younger generations and to not recognize the brilliance, the wisdom, the force that exists in the community and the fact that our community is actually in good hands with this next generation,” he says. “This space provides inspiration for us, but also allows us to actually understand who our young people are and they are individuals with a lot of imagination, who are committed to being agents of change and building a healthy, vibrant community.”