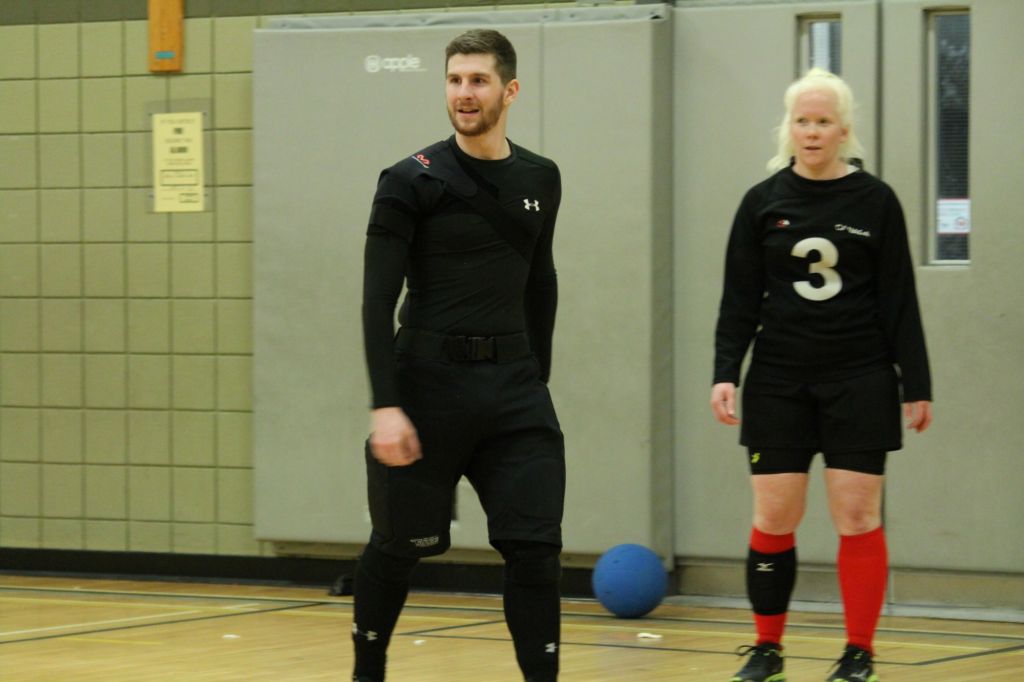 Kyle Brunet, 21, a former Algonquin game development student, was diagnosed at a young age with nystagmus and ocular albinism. Nystagmus is a condition where the eyes make repetitive uncontrollable movements, reducing depth perception and visibility. Ocular albinism is a reduction of the colouring of the iris which makes the eyes hyper-sensitive to light.

For many people with such visual impairments, the concept of playing sports is not something that might come to mind, let alone at a competitive level. Brunet, however, for the past eight years he has been involved in a sport that is not commonly known to many people.

The name of the game? Goalball.

“When I moved to Brantford for boarding school, I was introduced to the sport by a staff member,” says Brunet. “At first, it was pretty fun, so I figured I might as well keep going with it.”

Goalball was invented in 1946 as a rehabilitation sport for visually impaired war veterans. Since then, it has developed into a competitive sport, starting in the 1950s. Then into a Paralympic sport in the ’70s.

The sport is played in teams of three on a volleyball-sized court with nine-meter wide nets and a special ball that has a bell in it. The objective is for players to roll the ball as fast as they can and attempt to get it in their opponent’s net.

Then the opposing team attempts to block the ball from entering their net with their bodies. Specific areas of the court are taped off with string underneath to allow the players location references. Blindfolds are worn to make it fair between the varying levels of sight the athletes have.

“When I just started playing my coach mentioned that there was a provincial tournament coming up,” says Brunet. “I figured ‘why not try?’ and ever since I’ve just been getting better at the sport and wanting to try and compete at a higher level and hopefully just keep going with it.”

It’s a sport where players mostly rely on their sense of hearing so outside noises are restricted. If any noise is made during a throw, the offending team gets a penalty. Noise can be made by players before a throw. The audience is limited to only being allowed to make noise when a team scores a goal.

“I had planned on going to [the] Rio [Paralympic games] in 2017,” says Brunet. “When I found out I was classed out, and that I was unable to participate in Rio, I was upset because I had trained for five years before then to try and play in the sport.”

Brunet was classed out of the Paralympic team because his sight was slightly outside the specified classifications at 2180. This means his vision was too good to be allowed to compete in the Paralympics.

Despite not being able to compete in the Paralympics, goalball has brought Kyle to many different places for tournaments and competitions. He has been to Nova Scotia, Manitoba, and Alberta for provincial tournaments and junior national tournaments. He also helped represent the junior Canadian team in 2013 in Colorado Springs.

Brunet has recently returned to goalball after a two-year break. However, the road back into the competitive ring hasn’t been smooth or easy.

“In October I dislocated my shoulder when I went to go dive on the ground and I had to take three months off,” says Brunet. “So I just recently started playing competitively again because I’ve been able to throw better.”

He says that the sport allows himself and his teammates to develop good team-building and communication skills. It also gives them courage to tackle things in life that they normally wouldn’t do.

“I play it because of the community,” says Brunet. “They’ve been really great with helping me through everything in life, honestly. I haven’t been able to experience a lot of things in life because of my visual impairment on the sports side. This sport has definitely gotten me to do things that I never really thought I’d get to do; like travel the world and have a chance to play on a national team.”