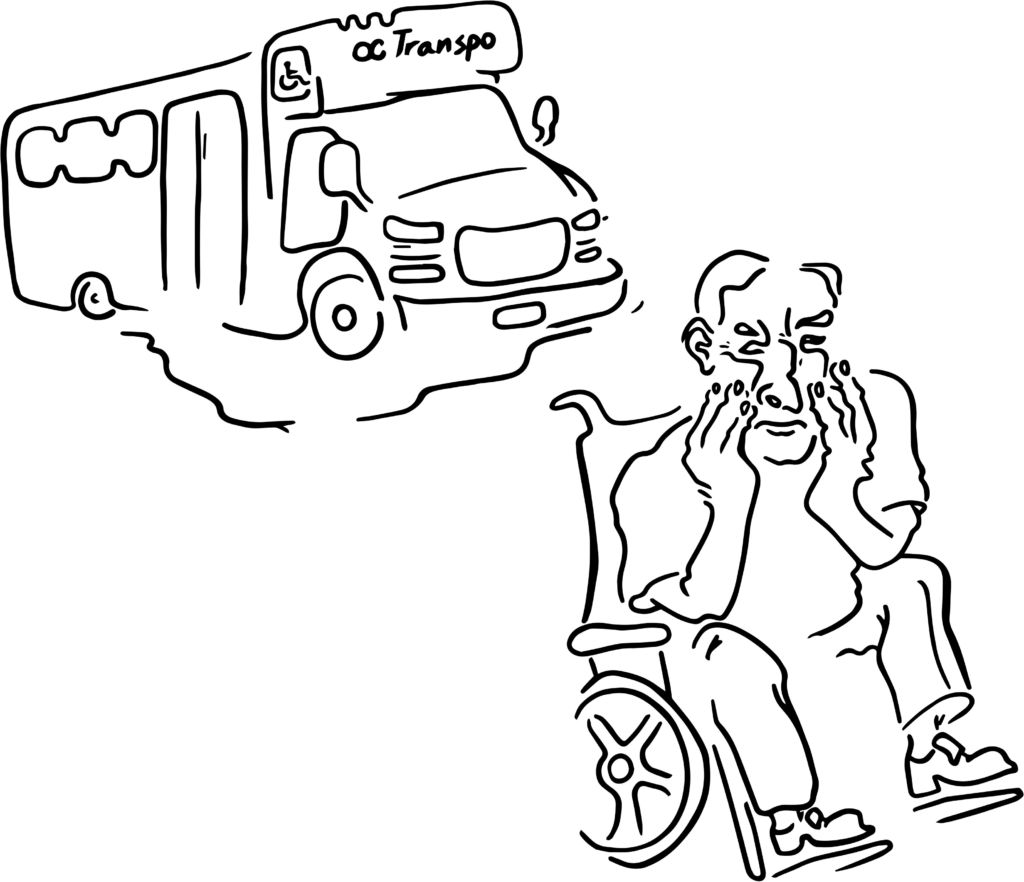 Frustrations over the poor service from Para Transpo continue as the City of Ottawa doesn’t appear to be adding any resources to help improve its services.

For people like June Coxon, a previous user of Para Transpo, the service was a vital mode of transportation in a tough time.

“I slipped and I fell. I crushed my knee and they had to replace it,” says Coxon. “I was in the hospital for a couple of weeks, rehab for a little bit longer. I’m still recuperating and it happened five years ago. They tell me it just starts to heal after five years. I don’t know how true that is but I can believe it. I didn’t stick with [Para Transpo] long, maybe six months I used them, maybe a bit longer.”

With a growing population, public transit is an important asset to an ever-expanding city. According to census data collected by Statistics Canada as of 2016, there was roughly 934,000 people. This is a significant concern for people living with disabilities in Ottawa.

In 2006, according to data collected by the Social Planning Council of Ottawa, there were roughly 150,000 citizens with various disabilities, making up 17.7 per cent of the Ottawa area population.

“It’s usually full,” says Coxon. “Any time I’ve taken it it’s full. Or eventually full. I don’t think they’ve got enough staff. They’re great when you finally do get them. The bus drivers, they’re really good but odds are they need more.”

The increase of the disabled population from 2001 to 2006 alone was 20.7 per cent. Para Transpo has not been allocating funding effectively to provide adequate service to this growing population.

In the 2018 draft budget the transit commission put $74.3 million in funding towards Ottawa transportation. Para Transpo received none of that funding. Instead, the money went towards replacing and repairing the OC Transept buses.

Without adequate funding, the service lacks a base to build an effective system. The population who demands this service exceeds the supply provided by the city.

“I didn’t use Para Transpo much because most of the things I go to are meetings,” says Coxon. “To get to a meeting that started at say, six o’clock, I have to call Para Transpo two hours in advance. I’d have to order it for two hours before that because they might come in ten minutes and they might come two hours from now. They can even be up to an hour or a half-hour late and still be considered ‘on time’. It makes OC Transpo look good, and that’s saying something.”

Because of the long wait times for buses, the Para Transpo has a taxi coupon program in place to help with the demand of transportation.

This alternative is not without its own issues. Although, It is more efficient for disabled commuters, it’s also in high demand which can result in poor performance.

“A lot of [complaints] have been mainly towards the taxi drivers from Para Transpo,” says Danica Cole, an intake coordinator at Lifemark/Para Transpo. “We almost never get complaints about the bus drivers, just on occasion we’ll get some on the taxi drivers. With the taxis it’s a bit more crowded in the vehicles. Sometimes the taxi drivers will get a little bit short tempered and, not lash out, but kind of refuse to go the extra mile like all the bus drivers do. They’ll make sure people get right to the door and if you don’t know where you’re going from the door they’ll help guide you. Most of the taxi drivers will just bring you to the door and not make sure you get in and they’ll just head back to the car.”

It is Para Transpo policy for the bus drivers to ensure that their riders make it to at least the first set of doors when they arrive at their destination. This policy does not necessarily extend to the taxi services that are partnered with Para Transept which has led to dissatisfaction of the service.

“The [taxi] drivers will help you climb out of the vehicle, help you kind of get near the door but they won’t actually make sure you get to the door before they leave,” says Cole. “That’s one of the only complaints that I’ve heard. That driver has been taken care of, has gotten extra training and kind of been put on probation. Unfortunately that does happen, but I’ve only heard it with some of the cab drivers.”

In 2019, Para Transpo is aiming to put roughly 50 more buses on the road to increase the effectiveness of the service to its users. One the positive side this will help alleviate the demand on the buses and potentially decrease wait times for its riders. But overall, this is not meeting the demands of the people using these services.

The taxi service has shown to be a more efficient and popular mode of transportation. But funding for taxi services is not a primary objective for the transit commission. More vans and cars for the associated taxi services will be funded at a later, unspecified, date.