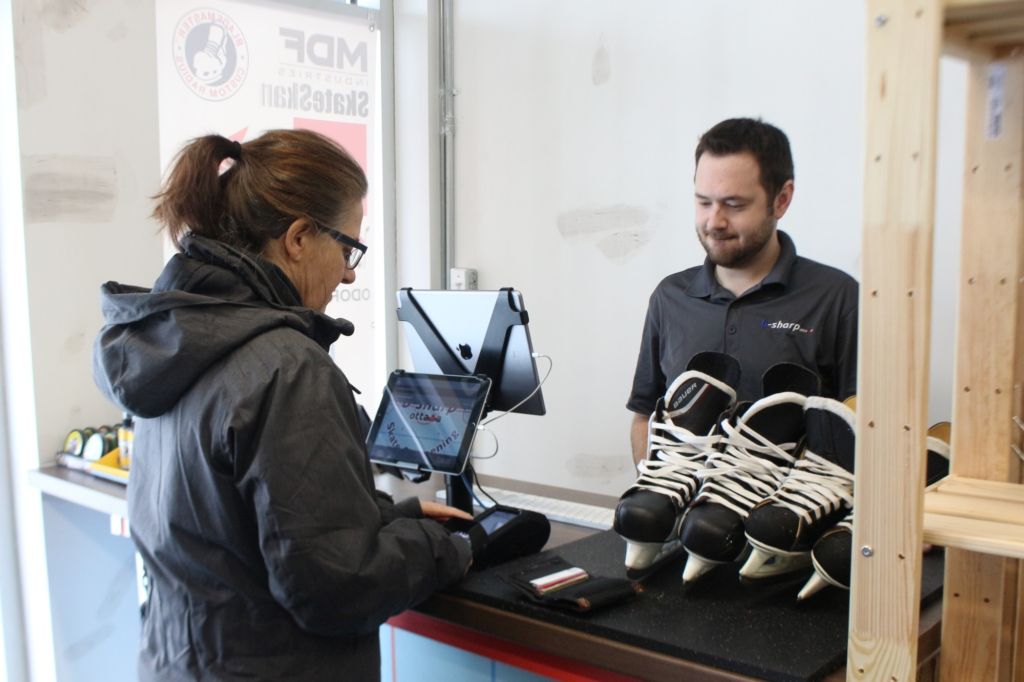 For hockey players and figure skaters, skates are one of the most important pieces of equipment they need and whether they are sharpened properly or poorly makes a huge difference in their ability to perform on the ice.

Joe Baker is the owner of b-sharp ottawa, a skate sharpening shop located in Barrhaven in the new Costco retail mall off Strandherd. He has been sharpening skates for more than two decades. He started when he was 15 in the basement of his family’s home on Woodroffe.

For Baker sharpening skates is an art form that he learned under the watchful eye of his father who owns Blades and Things, a retail store in Ottawa that used to operate at Merivale and Slack.

At first Baker just did the “junker skates” that didn’t require any special expertise but he slowly learned from his dad how to fine tune the sharpening. Now clients request him like they used to request his dad.

“(My manager, Aiden)’s been here two years,” says Baker. “It took him a year to get on my schedule so you can book him but people still don’t trust him. It’s the same with how it was with my dad.”

Baker attended Algonquin, graduating from the mechanical engineering program in either 2007 or 2008. One of the ways he uses his machination education is to redesign the machines he uses to sharpen the skates so that the machines meet his high expectations. He works with a Canadian company named MDF Industries, previously known as Fleming Gray.

“(Fleming Gray) is building my new skate sharpeners,” says Baker. “They’re the ones that I have some influence on how they’re built, which is why I’m going with the smaller company, not the bigger one like Blademaster or Blackstone, the two main guys. They won’t customize it. It is what it is.”

B-sharp ottawa relies heavily on technology to bring the best customer service experience to its clients from being able to book appointments through an on-line calendar to tracking sharpening cards on-line and use of QR codes on the skates to track all pertinent information to the client and skate.

“I scan your skate. It tracks everything: size of your skate, the blade that you have, how sharp they are, what team you skate on, if you have a prepaid sharpening card,” says Baker. “If you go to Costco, I can hit the little exclamation mark button and it sends you an email saying your skates are done.”

Baker’s clients aren’t just local. He services a large portion of eastern Ontario and even parts of the Maritimes. He has clients who mail in their skates to be sharpened. One of his most famous clients is Alaine Chartrand, a Canadian figure skating champion.

“I sharpen (Chartrand)’s skates when she’s in the area,” says Baker. “She’s from Brockville but skates out of Oakville and Nepean so when she’s here, I sharpen her skates. I’ve got one of her autographed skates.”

Baker was a figure skater for ten years. He started when he was nine and retired from competition when he was 19. Then he went into coaching but now he doesn’t have time for coaching while also being at his store seven days a week.

Baker will do in-person assessments at the rink to help a skater determine the best requirements for their skates and blades.

“As (the child) hits that middle range and they might be really tiny but they’re doing a higher-end jump,” says Baker, “you can’t fit them for what they’re jumping at based on what the on-line skate presence is for a skate (meaning) the skate you should have because you’re doing X. The (child) is only 40 lbs, if you put her in that skate it’s going to break a leg before it’s going to break in.”

Baker has the expertise from bringing together years of skating, coaching and skate sharpening to give skaters the best performing skates possible and he doesn’t charge a lot for it either. His prices are competitive with places like Canadian Tire and Play It Again. He charges $8 per sharpening but if you buy the sharpening card you save 25 per cent on 10 sharpenings.

In Hancock’s experience of watching kids learn to skate and play hockey, she says, “Lots of kids would be better skaters if they had consistent sharpening.”

2019 is a year of change and transition for Baker, including the birth of his second child early in January.

Baker hopes to bring in about a third more income this year than he did in 2018 but bills have to be paid first so he’s cutting back on his retail side. B-sharp ottawa just moved into the new space by the Costco on Boxing Day, an opportunity Baker had to jump on despite still having a year of lease left on his old store.

“It’s amazing to be here and my lease, you’re paying five or 10 year leases, so you jump on the opportunity and you run with it,” says Baker. “(The) Costco gas bar has been my biggest contributor.”