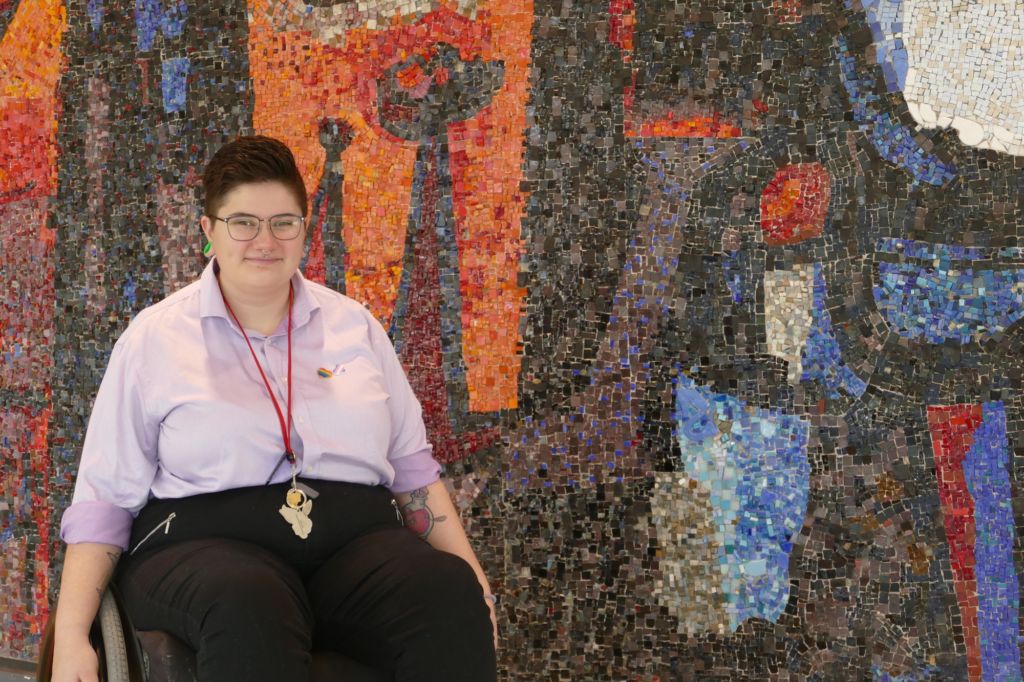 It’s 7 a.m. While the city is slowly getting up, Cameron Rose Jette is already heading to class, patiently waiting at the bus stop for the Para Transpo vehicle to pick them up. Five minutes pass, the bus is running late. Ten minutes pass, still no bus to be seen but Jette is still patiently waiting. Fifteen minutes pass and they know that they will soon be late to their morning class. The clock is ticking, it’s time for Jette to order an Uber.

This personal, yet public issue is one of many that pushed the third-year Human Rights student to run for city council in the October municipal election in Cumberland ward. Jette might have been the youngest candidate who ran this year, but their experience and outlook as a non-binary trans student – including their choice to use the pronoun “they” instead of he or she – has its importance.

In order for their voice to resonate, the 20-year-old used a totally different platform than the one young adults use to express themselves nowadays. Instead of writing a post on their social platforms, they created their own campaign. Jette’s political platform addressed issues that are particularly affecting our generation such as accessibility, diversity and education. Because young people are directly impacted by every level of government, Jette believes their voices need to be lifted-up. For this to happen there needs to be more youth involvement in politics. Although they didn’t win – they came second with 5.88 per cent of the votes in ward 19 – Cameron Rose Jette’s engagement paves the road for our generation to follow their path.

Jette’s dad never ran as a politician but he was friends with all the politicians in the city and helped them with campaign. Looking back at this period of their life, Jette believes this early approach to politics had a positive impact in their life. They feel like it gave them a chance to see the meaning behind an election by getting the chance to get to know politicians on a personal level.

“Today when I decide whether or not to vote for someone,” says Jette. “I ask myself if I connected with this candidate on a personal level because budget plans are one thing but if I don’t think you have a good heart and if we don’t agree on certain things, such as the way people should be treated or things that are impacting me and my community, then I am not going to vote for them.”

In Jette’s opinion, youth political engagement in Ottawa is very low today. From their perspective, a lot of people who are currently in power don’t realize the importance of having youth in power and working alongside with them. Therefore, youth are not empowered to even participate in changing the way politics currently operates.

“In four years from now, I will still technically be a youth but, there will also be more youth that will be in tune with the youth perspective, that will need opportunities to speak and have their voice heard, so we need to start working on that now,” says the candidate. “Youth are the ones who have the views that are going to shake things up. They are going to be around for a long time, so if things get better now, they might have a chance to have a really great life at some point. But if we keep waiting, then it’s not going to be our generation of youth that’s going to change things, we’ll have to put it on the next generation and it’s just going to push things forward. It’s never going to get better if we don’t shake things now.”

Shaking the way municipal politics operate in Ottawa, bringing our generation forward by paving the road is what Jette is aiming for in this municipal election. Since the beginning of the campaign, their voice has resonated with many youths across the city. From inside and outside of their community, the Cumberland ward candidate has received constant youth support.

“Even just them running for council has shaken things up by attracting public attention,” says Rachel Campbell Carleton student and Faculty of Public Affairs councillor Rachel Campbell. “Cameron is a visionary for someone so young, they have a good sense of what is important.”

Advocating for equality and inclusivity has always been important to Jette. By putting their name in the running, it became their mission to pave the path for marginalized people.

Danielle Lanouette shares Jette’s interests and concerns. The two young adults have been friends since they participated in the Canadian Roots Exchange volunteer program four years ago. Lanouette strongly believes Jette has their place in municipal politics. “I have never seen a politician addressing all the topics and concerns regarding accessibility, LGBTQ+ communities in the way Cameron has been,” says Lanouette.

“Something in their campaign they’ve been trying to promote are the issues related to marginalized groups. Being out there and telling the audience, there’s other people out there,” says Jacquie Jette. “The fact that Cameron is out there exposing themselves to the City of Ottawa and saying ‘we’re here and I want to be the voice of my group,’ I think is very inspiring.”

When Jette announced to their mom they were going to run for councillor of their ward, Jacquie was surprised their child was willing to take that next step. If the 20-year-old has been advocating for their beliefs and opinions in the past, the willingness to expose themselves on the municipal scene was unexpected.

According to Jacquie, the age factor and the lack of experience discourages youth to put themselves out there, but it’s important to understand that it’s by exposing themselves to their community that they will get the experience.

“When they took this on it was a challenge for them and I think they really took the bull by the horns,” said Jacquie. “Whatever the outcome is, I hope they come out of it knowing that they’ve really worked hard and it’s still a win for them.”

One thing that motivated Jette to run for council was to represent the new generation of voters who often don’t have confidence in older candidates. They knew there was a need in the City of Ottawa, for youth to be able to resonate with a younger voice in the race, a community leader who is experiencing the same struggles as they are.

“I’ve heard from youth that they feel inspired and hopefully in the next election they will be in my spot, or they will take on more of a leadership, or even in their life they will be more involved in different things they thought they couldn’t do in the past because they are a young person,” says Jette.

The election results landed Jette in second place in Cumberland ward with 741 votes in their favour.

For the Cumberland candidate, the experience of running in the municipal election was a win by itself. Their purpose was to inspire youth and pave the road for them to step up.

“It’s not for winning or losing,” concludes Jette. “It’s for changing the way we see politics in our community and if I can do that, then I’ve done my job here.”