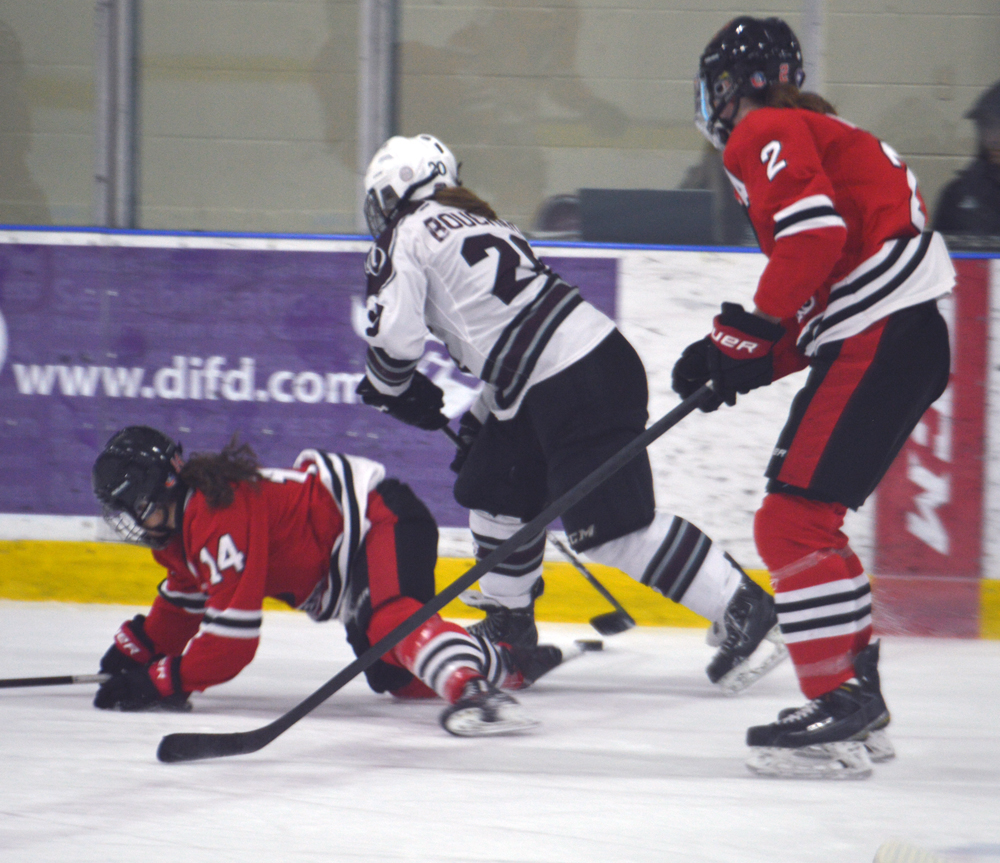 It was a fierce battle between cross-town rivals in women’s hockey as the uOttawa GeeGees won on their home turf against the Carleton Ravens in overtime on Jan. 24.

The heated match was tied after the third period. Less than a minute into overtime, GeeGees forward Melodie Bouchard scored the winning goal for her team.

“It was really sensational,” says Bouchard about the overtime goal. “I knew that we needed to finish this match quick so the Ravens didn’t get a chance later on, so when I saw my opening I took it.”

In addition to scoring the winning goal, Bouchard also contributed a goal at the start of the second period. Forwards Roxanne Rioux and Laurence Morissette also aided the team in scoring goals.

It has been a tough season for both teams, as the GeeGees have a 4-10 record while the Ravens hold a 2-9 record.

Despite this, Ravens head coach Pierre Alain is confident in his players’ abilities, saying they have been practicing hard since the start of the season.

“We treat every game like it’s a championship match,” Alain says. “We might not win them all, but we sure don’t lose without giving our opponents everything we have.”

Alain also commended the performance of the GeeGees during the game, saying they pushed the Ravens to their limits.

“Tonight we just missed the win against uOttawa, but honestly after seeing the drive from both teams, I wouldn’t have been surprised with either outcome.”

Even though Carleton lost this game, the score gap would have been larger if not for Ravens goalie Katelyn Steele, who has been with the team for five years.

“I saved as many as I could, but in the end I let one too many past me,” she says.

Steele is not only one of the most experienced players on the team, she also serves as a leader in an unofficial capacity.

“She’s the best player we’ve got right now and you always have to play your best player as often as you can,” says Alain. “Even off the ice, she is always focused on the team. She really is the heart of the team.”

Following the win, GeeGees assistant coach Chelsea Grills commented on her team’s performance this game compared to the rest of the season.

“They seemed more organized and were on the offensive more,” Grills says. “I would like to see this form of teamwork in future games.”

She also commended their cross-town rivals on their performance.

“Carleton has some really great players on their team this year, and there were moments where they had our team pushing their limits,” Grills says.

The Ravens will play against the visiting Concordia Stingers on Feb. 1, while the GeeGees travel to Montreal to face off against the Carabins on Feb. 3.