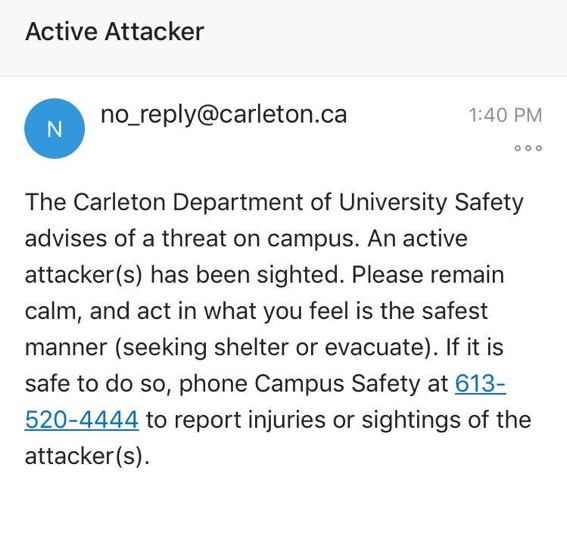 A false alarm warning was sent out to Carleton University students today in an email informing them of a “threat” on campus.

The email warned them of active attackers on the campus. Almost 20 minutes later, another message was sent explaining that the previous email was an error and that there is no actual threat on campus. “We apologize for the alarm and inconvenience this may have caused,” the school wrote in their second email.

According to the school, the false alarm was sent out while updating their emergency messaging. The university tweeted out to the public, saying the following. 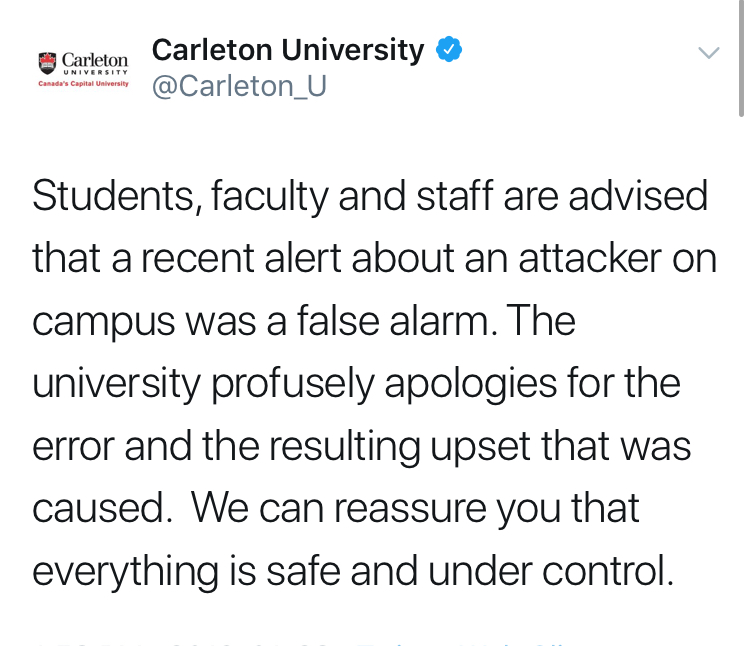 Students shared their outrage on Twitter, many of them not understanding how the school could make such a huge mistake.

Nicole Plante is a fourth-year student studying philosophy and political science at Carleton. She found it strange that the false alarm message was only sent through email and questioned the school’s effectiveness to communicate an emergency alert.

“The follow-up email clarifying the error came through 19 minutes after, that seems like a fairly long delay for a non-emergency of this magnitude,” Plante says.

Kirpa Grewal, a student doing her masters in political management with a background in risk and emergency communications, shared her thoughts on Twitter. She replied to a tweet from CTV saying, “Mistakes like these will cause students to lose faith in the emergency alert system as a whole. Carleton needs to make sure this doesn’t happen again.”

The school sent out an update, informing students and faculty that a wrong computer key was hit and one of their many templates for potential emergencies went out to the community in error instead of being saved to the system.

In the email, Carleton warns of the possibility of another alert being sent out and to disregard that notice.

What struck Thomas Williams, an English major student at Carleton, the most was that not every student, himself included, received the email detailing the false alert.

“I was on my way to campus and got frantic texts from my roommates. I never got the alert myself. If it had been real and I got there, I would have been walking right into where it was said to have been active,” Williams says.

“We were left in the dark about it for about 20 minutes and that was the scary part.”