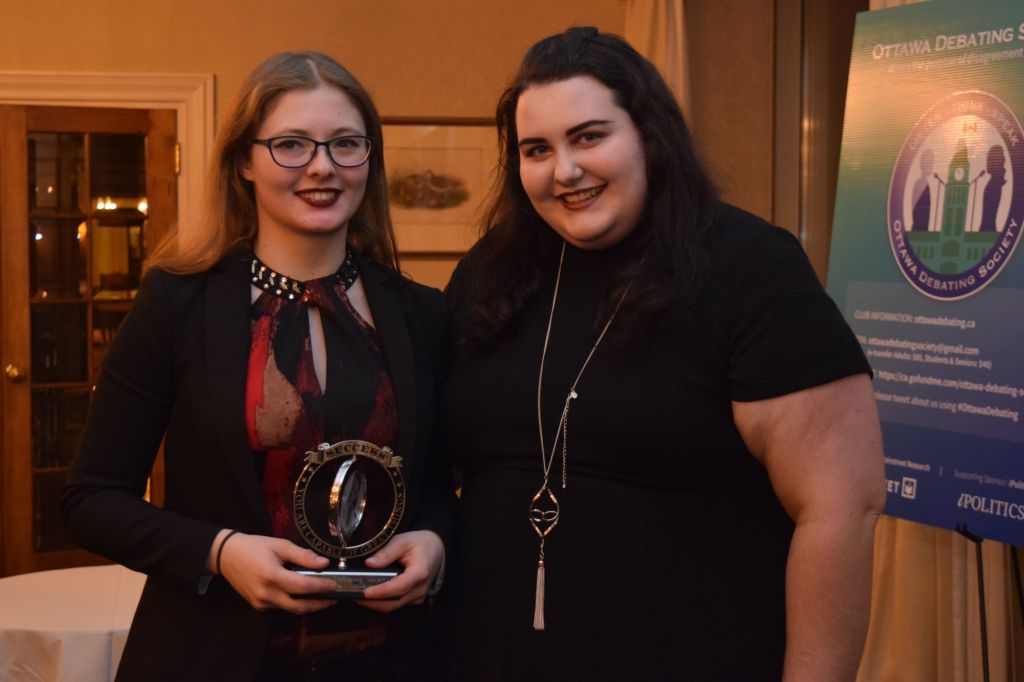 The Ottawa Debating Society celebrated its official launch at the Rideau Club on Jan. 22 with an inaugural debate featuring students from the University of Ottawa and Carleton University.

Following a parliamentary style of debate, competitors represented either the government or the opposition in a discussion centred around sunset clauses in the Canadian Constitution. Alex Steele and Alex Stephens, members of the English Debating Society (EDS) at U of O, acted as the government and won based off of the evaluation of appointed adjudicators.

“It felt really good to win this debate and since it was the first one, it seems historic in some way,” says Steele. “We were happy to represent the female side of debating in this forum.”

Despite this win for U of O, the Carleton team, Ali Hassan and Isaac Botham, were not left empty-handed. While the adjudicators met to make their evaluation, organizers of the event handed out ballots for the audience to decide who they thought presented their argument more convincingly. As a team, they took home the popular vote and Botham was crowned “best debater” by the judges.

“When I heard about this event, I was definitely just really excited to get Carleton involved,” says Hassan, the president of Carleton University Debate and Speech. “Debate is a great skill to learn and we were very excited about the possibility of spreading it beyond the often-elitist post-secondary circles and also towards the general public.”

Prior to the debate, both teams were given an idea of what the topic would be but didn’t know which side they would be advocating for. Because of this, they had to prepare for either outcome.

“We have to have a lot of general knowledge and we build that within the club by having seminars and social events featuring guest speakers that know a lot about certain topics,” says Stephens. “It’s important to have this background because we are essentially going into these debates blind and only have 15 minutes to prepare after being assigned our side.”

“My entire speech was done on the fly,” adds Steele. “It’s crucial for us to be able to think on our feet.”

According to Hassan, it’s normal for debates to be structured in a way that leaves competitors with no idea what they are about to walk in to.

“We rarely know what the motion is going to be let alone what side we will be on, so we practiced by debating both,” he says. “We just kind of get used to speaking authoritatively on things even if we don’t understand the topics perfectly.”

These teams had only participated in collegiate debates in the city with their university teams because before now, no public debating group existed.

Heather Bakken, the founder and president of the Ottawa Debating Society, moved to Ottawa from Toronto, where she was a member of the Toronto Debating Society. Shocked that there were no English-speaking clubs of this nature in such a political city, she decided to take matters into her own hands. For her, it was a no-brainer to launch the club with the inaugural debate between U of O and Carleton.

“When I started thinking about starting the club, I thought the best place to go would be where I basically cut my teeth, which was the university debating scene,” Bakken says. “I reached out to the two debating clubs and they were very quick to respond and were eager to participate.”

According to Bakken, debating in this way encourages people to look and think critically about both sides of an argument.

“Regardless of what the format is, you have to take the time to listen to the opposition,” she says. “Oppositional thinking is a very good way to train yourself to listen to something that is probably not in your echo chamber and something you might have an unconscious bias towards. Debating can teach you to expand your thinking.”

The Ottawa Debating Society is now accepting members and will continue to meet regularly for debates. As for Bakken, she is excited about what is to come in these early stages and in the future.

“The outcome should be that if you are a part of this club, the skills that you will take away are to listen, think and speak,” she says. “This is our motto.”