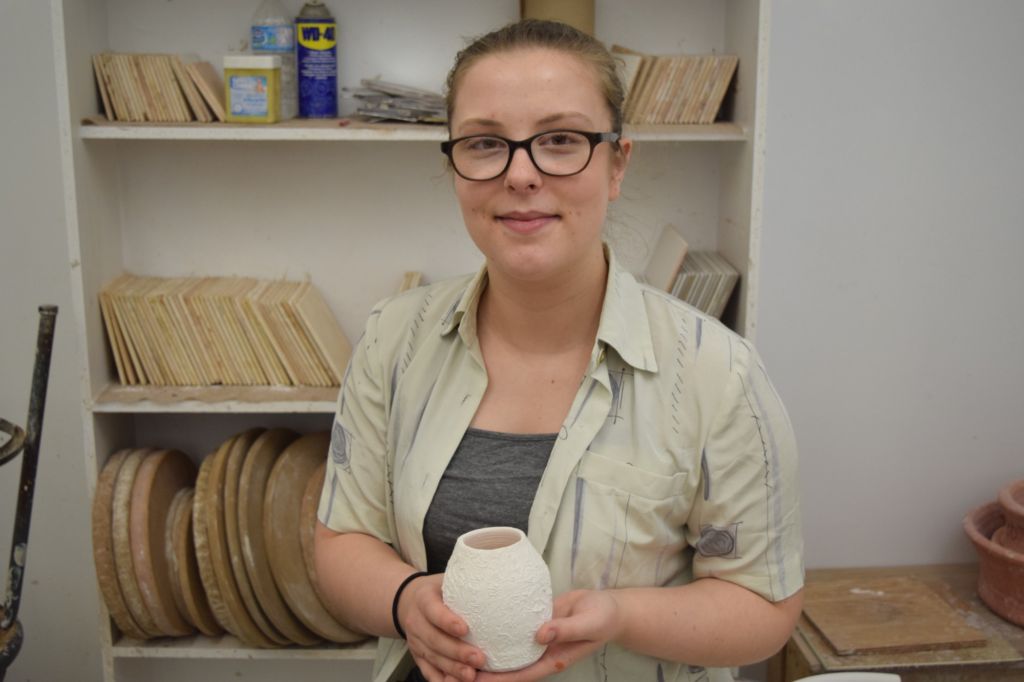 Shaila Hanscom, 20, is a third-year student at the Ottawa School of Art and she is already making a name for herself. Not only is she the recipient of various scholarships from her art program, but she also teaches art to children as a part-time job.

Hanscom discovered her passion in high school, but the love for art runs in her family.

“My mom’s side is very artistic. My grandma was a painter so it has always been in the family,” says Hanscom. “When I was in high school, it kind of just developed more into something that I really enjoyed and that I was dedicated to. I had a really great high school teacher that pushed me to think about art as a career.”

But to Hanscom, art is more than just a hobby or a career. It’s a major part of her life that helps her cope with her anxiety and depression.

“It is one of the places where my anxiety couldn’t reach me,” Hanscom says.

Her mental health journey began in high school but she was unable to recognize her symptoms of anxiety or depression. She believed she was just going through the motions of being a teenager. While studying in her current art program she discovered that was not the case.

“I got into a program that I really loved and I loved what I did and I was still having these feelings and issues,” Hanscom explains. “I understood why and that is when I started looking into what that could mean.”

Hanscom’s main focus is ceramics and three-dimensional work in general. While working on ceramics, she feels a detachment from how she is feeling and is able to focus on her relationship between her body and the clay.

“You don’t focus on what you are consciously doing, you focus on the external object,” describes Hanscom. “Your focus is shifted in a way that you are just not aware of anxiety at the moment.”

Not only does she like the dialogue between her and the medium, she also likes the risk that comes with ceramics. Ceramics are fired in a kiln and it is unpredictable if the ceramic will turn out the way one expects it to.

“I find there is a lot of freedom with that. That you kind of just go with it and make it work which is kind of fun,” Hanscom adds. “You don’t have to preplan everything. With painting, I find that I get stuck in the planning of it or I get stuck in the composition of it whereas with ceramics, you kind of get a general shape and then you can work off of that.”

In the second year of her program, Hanscom wanted to follow another ceramic class but there were none so she chose to do a mentorship instead with the ceramic’s teacher, Maria Moldovan.

“It was a great pleasure to meet someone in the class who was deeply, seriously interested in three-dimensional work in ceramics and sculpture,” says Moldovan. “I always work with themes and assignments so the students have some borders and she always managed to keep her voice between these borders and we always managed to have balanced communication.”

Hanscom was able to apply for a show through her mentorship. Normally every student gets a chance to have at least one show during the program, but Hanscom calls it a “happy accident” that she already got one in her second year. The art exhibition was called Erosion and Existence.

“It was about the weathering of erosion against a rock and how the rock fights back against this erosion and will transform due to its pressure,” she describes. “The resistance is that it doesn’t fall away, it just changes to adapt to its situation. “

At that time, Hanscom was going through changes in medications and she was reassured by this metaphor. This year’s show, Under Restoration, deals with accepting her diagnosis, accepting her limitations, and being able to fight for her health.

“At this point, where I am at, is making conscious decisions of how I am thinking and how to respond to certain things,” she explains. “It’s a work in progress but it is easier to identify what it is now whereas before I didn’t know what it was. I just knew that I wasn’t happy and I didn’t understand why and I was constantly in a state of just anything could set me off.”

Over the Christmas holidays, Hanscom was away from the studio for almost six weeks. She was unable to work at home due to the health hazards that come with ceramics. Being away from all of it was difficult and she felt that her depression was kicking in again.

Although her family was a big support and she didn’t have any anxiety related to school work, she is happy to be back in the studio.

“It reassured me that this is what I am doing because it is the thing that helps me heal,” says Hanscom.

In the near future, Hanscom wants to complete her art diploma and then join the welding and fabrication class at Algonquin College in order to use it for both trade and art. As for long-term plans, Hanscom hopes to have her own studio with a gallery and a workspace.

She currently takes commissions and sells her art via her Etsy account. Hanscom’s show is going to be available for display at the Fritzi Gallery from Jan. 22 to Mar. 10. For more information, check out her website.

At the Ottawa School of Art, everyone belongs – creative or not