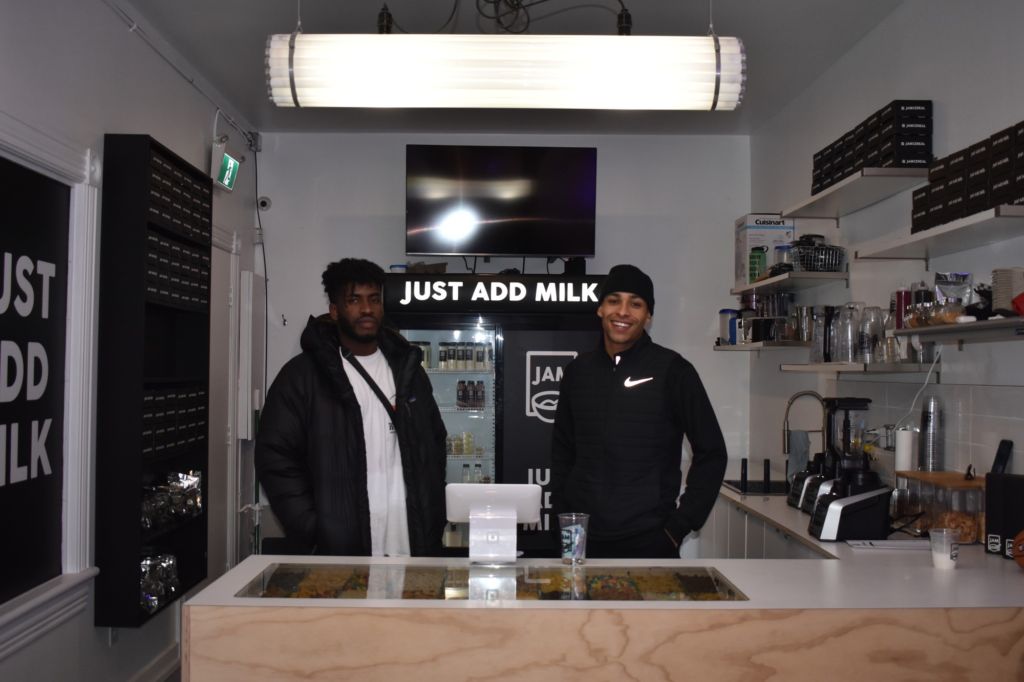 Remember when you were a kid watching your favourite cartoon on a Saturday morning while your Mom poured you a bowl of your favourite cereal? Your toughest decision of the day was choosing between Froot Loops or Lucky Charms. But nothing was more satisfying than the first crunch of sugary goodness while the opening credits of SpongeBob SquarePants played from the television.

That feeling of nostalgia is the driving force behind a new business that two young men from Ottawa have created. Desean Gremli, 24, and Tolu Makinde, 25, are the owners of Ottawa’s first cereal bar.

“We think about the kids liking this but when we were that age, we liked it too, so it’s cereal-based treats and drinks to hit that nostalgia in everyone’s head,” Makinde says.

JAM Cereal, short for Just Add Milk, is a new business that officially opened on Jan. 20, 2019. You can visit JAM Cereal at 891 Bank St. and enjoy sweet treats like grab-and-go cereal bowls with about 30 options to choose from, as well as a variety of milkshakes and ice cream sandwiches.

So, who are the two masterminds behind this unique shop in Ottawa?

Gremli and Makinde first met through a mutual friend when they ran track about 10 years ago and have hit it off ever since.

In 2015, both men were working as bank financial advisors when they realized they wanted to move in a new direction and get serious about owning their own business. “I wanted to put myself in a situation where I would force myself to do what I wanted to do, or at least try and fail,” Makinde says. “You’re going to do that when you’re younger but you can’t do that when you’ve got a family or a mortgage to pay.”

Both men had dreams as kids to be their own boss and now it was time to make those dreams a reality. “It’s not even just us. It’s all the people we were growing up around too,” Gremli says. “It’s millennials, we just don’t want to work for anybody, we just want to have our freedom.”

They say their idea of owning a cereal shop came to fruition while they were grabbing McDonald’s. “We were driving around, it was probably about 1 a.m. at Saint Joseph in Orleans and I was like ‘I want cereal right now, why is there no spot just to get cereal,’” Gremli says.

Gremli went to Brooklyn, New York and checked out the spot his friend told him about. After his trip, the two talked about how they could push the concept further and create a shop that was even better.

Throughout 2016 and 2017 they worked towards gaining the financial ability and means to open up a cereal shop of their own. “We kind of waited for that shift in culture in this city. At first, I said I wanted to go to Toronto and do this because they’re ahead in culture and trends,” Gremli says. “But now I find Ottawa is coming around to it.”

By July 2018, their dreams really started to become a reality, including the design of their logo for JAM Cereal and the recipe for their unique milkshakes. The two men planned out their menu with care and attention to detail. In fact, many of their cereal combo bowls are named after some of their inspirational friends from Ottawa who have helped to shape a more culturally trendy city.

With the official opening day under their belts, both men are feeling optimistic about their business and the new space it’s in, “people like the T.V., the basketball net, and the overall aesthetic, they like the shakes, and the fact that we have cereal that’s not from around here,” Gremli says.

Despite a frosty Sunday, Gremli and Makinde were pleased with the steady turnout for their business’ first official day open. As for the clientele, all are welcome.

“You see kids coming in with their parents and then the parents coming back, without their kids. You have the people our age coming in with their girlfriends, even crews of six dudes will come in, all getting milkshakes,” says Gremli. “You see a bit of everything and that’s kind of what we wanted, that’s kind of what we thought was going to happen and we’re happy that’s what we’re seeing so far.”

To anyone looking to start their own business, Gremli’s advice is to manage relationships and be mindful of how you treat people. “You never know who you’ll need to call for help,” he says. Setbacks are normal, he says, but everyone should acknowledge their own power.