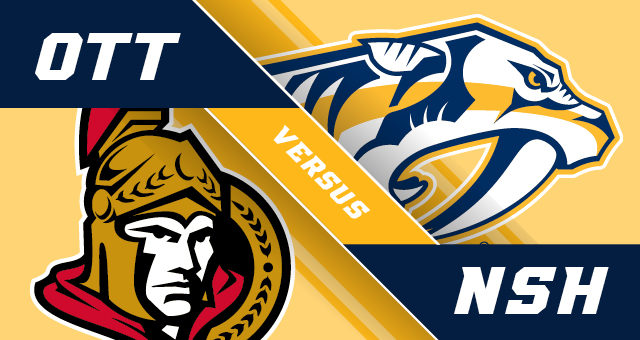 The Ottawa Senators took two points from the visiting Nashville Predators on Monday night, but it wasn’t without drama, as the home team squandered a three-goal lead before winning in overtime.

Thomas Chabot scored the game-winner 21 seconds into the extra frame, giving the Sens their 11th home win of the season. Craig Anderson made 31 saves for his 14th win of the year.

Ottawa coach Guy Boucher liked what he saw from his team, as the Sens showed resolve in not quitting following Nashville’s comeback attempt.

“We have very good first periods lately. It’s good, guys are prepared, they’re hungry, they follow game plans,” said Boucher, adding that the first home game following a road trip is always a challenge. “Reality is reality, as the game goes on, we wear down a bit and that’s exactly what was happening. It took everything we had just to get it to overtime.”

Sens defenceman Max Lajoie took a tripping penalty nine seconds into the third period, and Nashville’s Craig Smith would bury the powerplay goal shortly after, bringing the Preds to within a goal. Just over six minutes later, Roman Josi fired a shot that deflected off a defender and past Anderson for his second goal of the game, tying things up at three goals apiece.

Nashville would be penalized for having too many men on the ice with just over six minutes remaining in regulation, giving the Sens a chance to regain the lead. However, much like it had since the end of the first period, Ottawa’s offence failed to generate a real scoring opportunity.

A minute after the Sens power play ended, Justin Falk took a tripping penalty, as Nashville looked to complete the comeback. They would be unsuccessful in that endeavour, as the score remained tied, sending the game to overtime.

Falk took an interference penalty just over four minutes into the period, leading to a sustained powerplay for Nashville, capped off by a goal from Josi to put Nashville on the board.

Sens forward Bobby Ryan decided to pick a fight with former teammate Kyle Turris midway through the second period, with Ryan seemingly coming out the victor. Following the fight, Brady Tkachuk appeared to deflect a backhanded pass into the net, but upon further review, the officials determined that Tkachuk’s stick was above the crossbar, negating the goal and keeping the score at 3-1.

Following the fight between Ryan and Turris, tensions seemed to rise, as the final five minutes of the second period featured multiple skirmishes between the two teams.

Josi took a high-sticking penalty early in the first period, leading to the game’s first man-advantage opportunity. Max Lajoie would score his seventh goal of the season on the subsequent powerplay. Just a few minutes later, Tkachuk scored his tenth of the year, following a missed opportunity by Mark Stone on a breakaway.

The Sens appeared to score a powerplay goal with just over a minute remaining in the period, but the referees determined that a high stick resulted in the puck crossing the line. However, Ryan Dzingel would score his 13th goal of the year on a partial breakaway with 11 seconds remaining, giving the home team a 3-0 lead heading into the first intermission.

Ottawa is off until Friday, when they travel to New Jersey for a showdown with the Devils, before returning to the Canadian Tire Centre for a date with Alex Ovechkin and the Washington Capitals on Saturday.