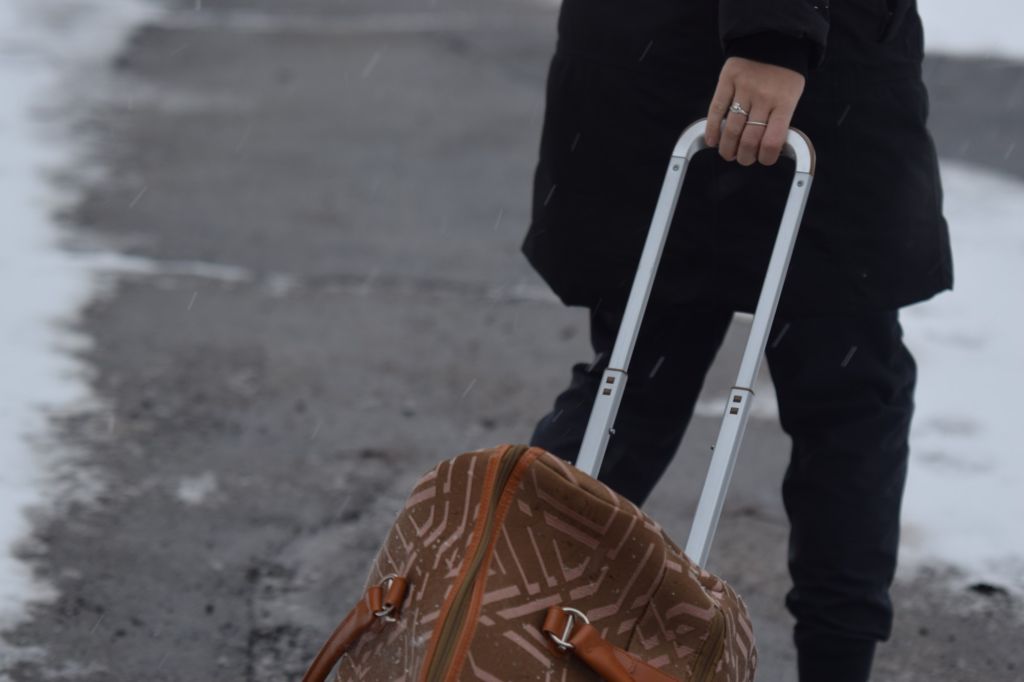 The trees blurred on either side of the highway as I pressed my foot on the gas. In the company of my cousin and with music blaring out of the speakers, I almost forgot where I was going.

As I crossed over the Quebec border from New Brunswick, my reluctance grew heavy and I started to question whether I was making the right choice.

I had lived in the same small town for most of my life with an incredible support system of friends and family. It was all I knew and at one point, I could never have imagined separating myself from that.

From an outside perspective, everything looked fine. But the truth is, I had experienced some things in the past that I just couldn’t let go of and my environment was starting to suffocate me. Despite feeling this way, I was anchored in place by the fierce attachment I had to my home and the people I loved.

At 21, feeling like I had exhausted all of my options, I considered the unthinkable. What if my attachment to home was doing me more harm than good? Maybe what I needed most was to get some breathing room and start over.

I wondered: is running away from home really as bad as it’s made out to be?

In winter 2017, I was in my fourth year at Mount Allison University in Sackville, NB and I was only taking one online class. After failing all four of my courses in the previous semester, it was about all I could handle.

But if I am being completely honest, I couldn’t even really handle that.

I spent most of my days in my room with the blinds closed, staring at the wall. I was taking antidepressants to no avail and was becoming far too comfortable with being miserable. I saw my third counsellor in four years, attempting to work through the same problems that had been plaguing me for most of my life.

My parents didn’t know what to do. Even though they said otherwise, I felt there were expectations that were impossible to meet. My dad is a chief financial officer for a big company and my mom has three degrees. They both have worked incredibly hard and I have watched them with awe and admiration ever since I was a child. All I ever wanted to do was make them proud and I felt like I was failing them.

I had many conversations with my dad and stepmom about what my options were. At first, it was decided that I would simply graduate later than intended but as time passed, I became desperate for another solution.

I was slowly destroying myself with the notion that my life had to turn out a certain way. I always thought I would graduate university with my friends and then return to my hometown to settle down and start a family. I was not prepared for anything else. Coming to terms with the fact that my plan would have to change and that I wouldn’t graduate after four years was incredibly painful and embarrassing.

The idea of taking a year off school to live at home and work on my mental health was discussed. But somehow, I knew that it would only make what I was feeling worse. I scoured the internet for other programs in different cities and that’s when I landed on the journalism program Algonquin College.

Ottawa wasn’t unfamiliar to me and journalism had always been an interest of mine. As I browsed the website I thought, “this is it, this is my opportunity to turn my life around.”

It took weeks for me to muster up the courage to bring my proposal forward to my dad. While remaining extremely supportive and attentive, he had his concerns. I will never forget sitting at the kitchen table and hearing him say, “why do you think something is going to magically change just by going somewhere else?”

And he had a point. I didn’t really understand it either at first but deep down I felt that this would be the right thing to do. I never thought that my mental health would improve overnight, but I needed to see if some time away from everything I knew would make a difference.

While everyone has different reasons for wanting to leave home, this feeling of wanting something better isn’t unique to me.

Allyson Padgett, a 27-year-old baking and pastry arts student at Algonquin, spent six years in medical school in Honduras before deciding to move to Canada to become a pastry chef.

Much like me, Padgett comes from an incredibly close-knit family and always wanted to do right by them. Even though she dreamed of being a chef from the time she was a child, she let it go to please her mother and pursued a career that was viewed as more practical.

When her grandmother became ill with cancer, she took a year off from her studies to take care of her and when she passed, she couldn’t bring herself to return to school.

“It was very hard on me and every time that I tried to go back to the hospital (for school), I just couldn’t do it,” she says. “I always knew that I didn’t want to be a doctor but after my grandmother died, I felt it was time to pursue my dream.”

With only two years remaining in her degree, Padgett decided to leave medical school and enrolled at Algonquin – a decision that was extremely difficult to make.

“My mom didn’t understand it at first and it took some time for her to accept that I wasn’t going to be a doctor,” she says. “After a while, she got more comfortable with it and realized that it’s my life.”

While Padgett largely made this choice in order to live out her dream of being a pastry chef, she also made it to relieve herself from the pressures she once felt from her family. According to her, this was necessary for her to form some independence.

“I hate to admit it, but they did influence my decisions a lot and I wanted to show that I could take my life into my own hands,” she says. “If I make mistakes along the way, at least I will know they are my mistakes.”

On April 29, 2017, I packed my small car to the brim and started my 12-hour journey to my new home. A few months later, I began my studies at Algonquin. Nervous and completely unsure of my new environment, I kept an open mind and jumped in. Little did I know, the course of my life was about to change drastically.

In discovering my love for journalism and writing, I also found my motivation and sense of purpose again. I went from feeling like there was no hope for me, to believing that the possibilities were endless.

But just as I predicted, running away from home and starting over in this way didn’t make all of my problems disappear. I still hold onto my past and I have to work on my mental health every single day.

According to Dr. Joanna Pozzulo, professor and chair of the department of psychology at Carleton University, it isn’t uncommon to hold onto negative memories or events and receiving support to address these issues is often lifelong.

“I like to explain this using the analogy of taking an aspirin,” she says. “When you have a headache, you take an aspirin and more often than not, you are going to start to feel better and will stop taking it. But what happens when your headache comes back? You will take another aspirin.”

Unfortunately, there is no magic solution that works for everyone, Pozzulo says. It’s about taking the bad days and making sure they don’t cloud your life.

So, I take it all day-by-day, accepting that healing isn’t linear and feeling proud of how far I’ve come.

As I sat in my car roughly a year and a half ago, worrying about whether I was making the worst decision of my life, I could have never foreseen the progress that I was going to make or the positive impact this city was going to have on me.

With my eyes faced forward, I could only hope that everything was going to work out and that I would get to a point where it wouldn’t hurt so much when I looked back.