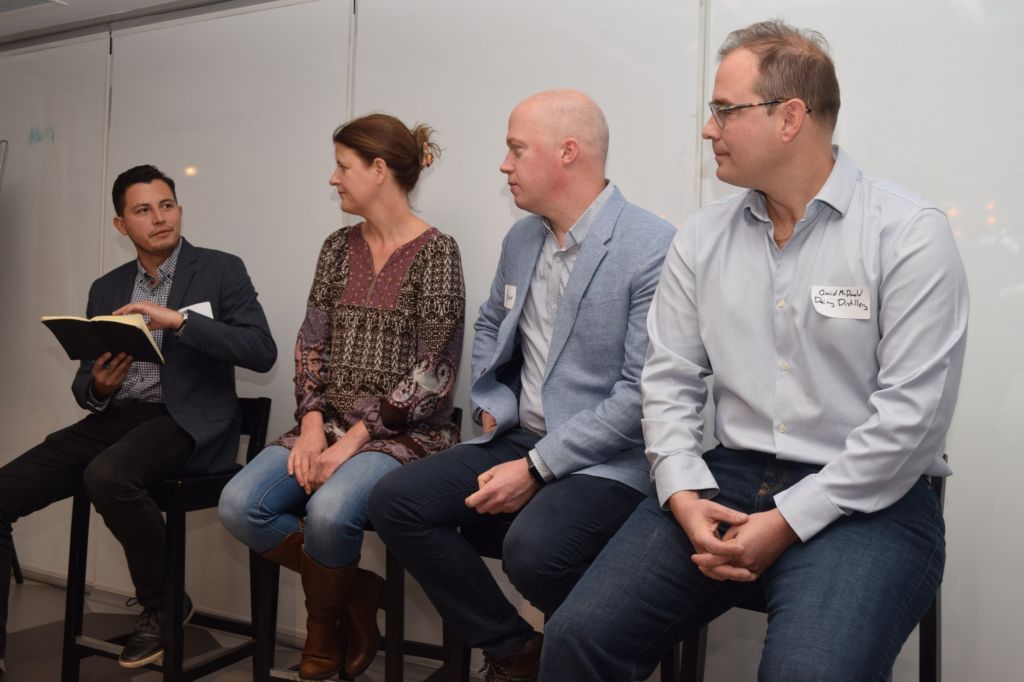 Turning a milk by-product into vodka is just one example of how Ottawa’s local businesses are practicing sustainability.

Omid McDonald’s company, Dairy Distillery, thought of the idea when they noticed that a liquid called milk permeate was being dumped at a rate of 200, 000 litres a day at a factory in Winchester.

“We saw an opportunity in that waste to make alcohol,” said McDonald.

He was one of the three speakers at Nov. 13’s panel discussion on how local businesses communicate sustainability presented by University of Ottawa’s master’s students in environmental sustainability.

Tinotenda Makosa, a student from the event’s marketing team, said that it’s essential for young professionals to get involved in matters of sustainability.

“It’s important for students because we are the future and if we are to make a difference, then we need to know exactly what is sustainability, what are the problems with sustainability; what are the challenges that governments are facing, that society is facing, that businesses are facing,” he said. “In that way, as we grow up and as we get into the business sector, we’ll be able to address these challenges with taking a step forward.”

His classmate, Daniel Arteaga Bastidas, moderated the discussion between the three panelists on the sixth floor of Impact Hub Ottawa.

“Our role in the community is to help individuals take control of how their power is produced,” said Graeme Cunningham who is the Regional Sales Director at Bullfrog Power. “So basically (we) provide a way to ensure that the power that is produced on our customers’ behalf, comes exclusively from renewable sources.”

“As a zero-waste grocery store, we focus on the fact that the customers who shop at our store do it without wasting packaging,” she said.

She went on to explain that the customers who visit the store come with their own containers or bags. The container is weighed, the customers shop around, and then the customers go weigh their items at the cash register after deducting the weight of the container.

McDonald discussed how his company not only communicates the environmental side of sustainability but the social side too. Last year, the milk permeate that was being dumped into fields was releasing a foul odour and giving people headaches. In order to dispose of the permeate, farmers have to bear the cost for an expensive treatment process.

“With our project, we take some of that permeate out of the loop, saving farmers money as well and then also generating a new revenue stream for them by creating a new value-added product,” he said.

Leloup explained that a major challenge in managing a green business is the discrepancy between awareness and action.

“When you raise awareness about waste reduction, everyone loves the idea of reducing waste,” she stated. “But between loving it and always taking action, there is always a bit of a gap.”

In order to bridge the gap, she says that they try to break the idea that “living sustainably is effort.” Although she agrees it does take some effort, she believes that humans are capable of getting into sustainable habits to the point that it is no longer difficult.

“We need laws, we need regulations that are going to create systematic change, not just 20 per cent of the population doing change and 80 per cent doing business as usual,” stressed Leloup.

Referring to the Intergovernmental Panel on Climate Change’s special report, Cunningham reiterated that in order to keep global warming at a limit of 1.5 C above pre-industrial levels, emissions need to be significantly reduced by 50 per cent by 2030.

“I don’t think any amount of finger-wagging and cajoling your neighbour is going to get us to that level of speed of decarbonisation that is necessary scientifically,” he said, emphasizing once again on the need of laws and legislation.