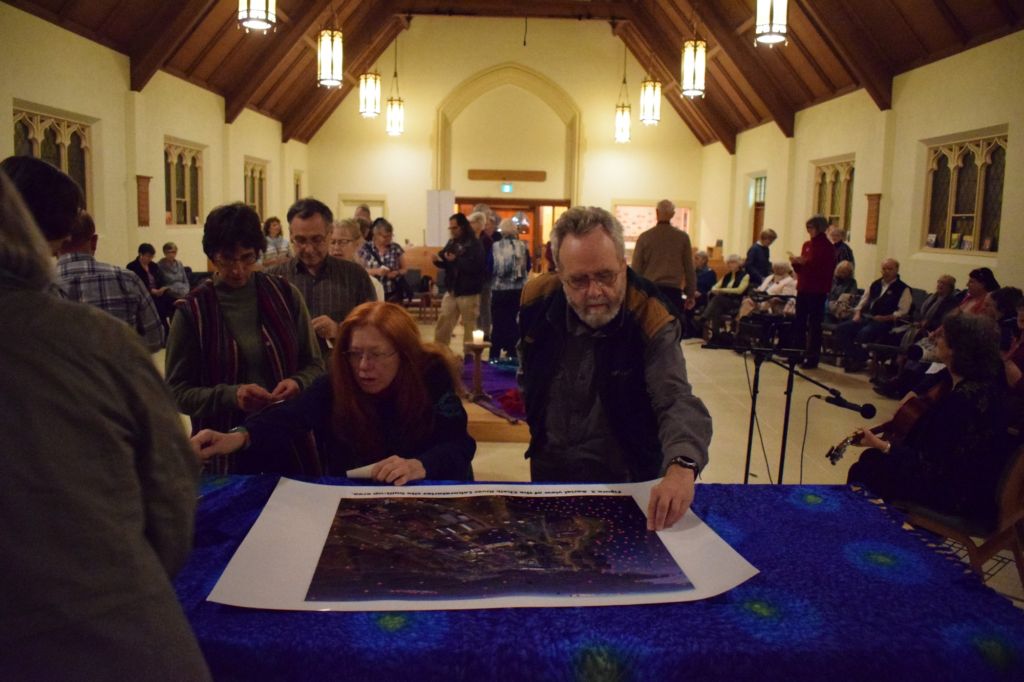 Earlier this month, Ottawa residents passionate about the subject gathered in solidarity for the protection of our waterways at Running Deep — The Power of Water.

The event, organized by the Water Care Allies of the First United Church and the Ottawa Storytellers, was an evening of stories, songs, and ceremony.

Dean Verger, a local storyteller and professor at Carleton University, was the first to share a story about the impact water has on people and places.

“No one sets out to poison a river, or to kill a child. Those are horrible things. But they happened,” he said, looking around at nearly 60 people gathered in First United Church, each one eagerly awaiting an explanation.

Referencing facts from Dan Fagin’s book Toms River: A Story of Science and Salvation, Verger told the story of Toms River, a thriving small town in the 1950’s.

Residents of Toms River unknowingly drank contaminated water for over 30 years after a dye-manufacturing plant, which employed many residents of the town, arrived in 1952. The Toms River Chemical Corporation, owned by the Swiss company Ciba, disposed of highly-toxic waste by letting it flow into the river. That is, until the river began to smell. So the plant built a pipeline to the ocean, and buried or dumped the rest in pits on the surrounding property. The toxins entered the drinking supply and have since been connected to the unusually-high incidence of children in Toms River with leukemia.

Verger’s story is a powerful and timely anecdote with the proposed radioactive waste disposal site in Chalk River. Attendees expressed opposition to the proposed waste site by placing stickers on a poster of the property, which is located right beside the Ottawa River.

Local singer-songwriter, Pat Mayberry’s voice and penetrating lyrics echoed through the sanctuary, singing lyrics such as, “None shall claim, none shall squander, this I write, to living water. And the rivers shall run free…”

Anishinaabe Kwe Elder, Grandmother Francine Payer, also attended the event. “Water is speaking, are we listening?” asked Payer, opening the evening with a water ceremony to pray for the protection and health of water.

Created 400 years ago by Grandmothers, Payer said the water ceremony is needed now more than ever.

“They knew water was in danger just like Mother Earth is in danger,” said Payer.

“There is a reason the saying ‘ignorance is bliss’ is an oft-used saying,” said Verger. It is easy to place blame on companies like Ciba, but he recalls “profit at all costs” being one of the first lessons he learned while studying business at the University of Western Ontario.

“Successful people learn how to cheat,” he said, “because cheating is profitable.” But in an age of mass manufacturing Verger said the too few inspectors can’t know everything. “People have to take responsibility for what they know.”

Ellis Lynn Duschenes ended the evening with a light-hearted tale of a young water-carrier who walks many miles each day with nothing but two jugs and a yoke over his shoulders. The older of the two jugs, leaking and tired, tries to convince the boy to retire him and buy a new jug, one that will still be full when he arrives at the market to sell its contents. But the boy shakes his head and tells the jug to look down at the ground the next time they travel the path.

The jug did as he said and on the way to the market the path was vibrant with green grass and wildflowers. But on the way back home, the now empty older jug was on the other side and saw the path was bare with only stones and dirt. He didn’t understand. So, the boy told him: “You water that path, so that things live. It is beautiful. And that is more important than a little bit of extra money.”