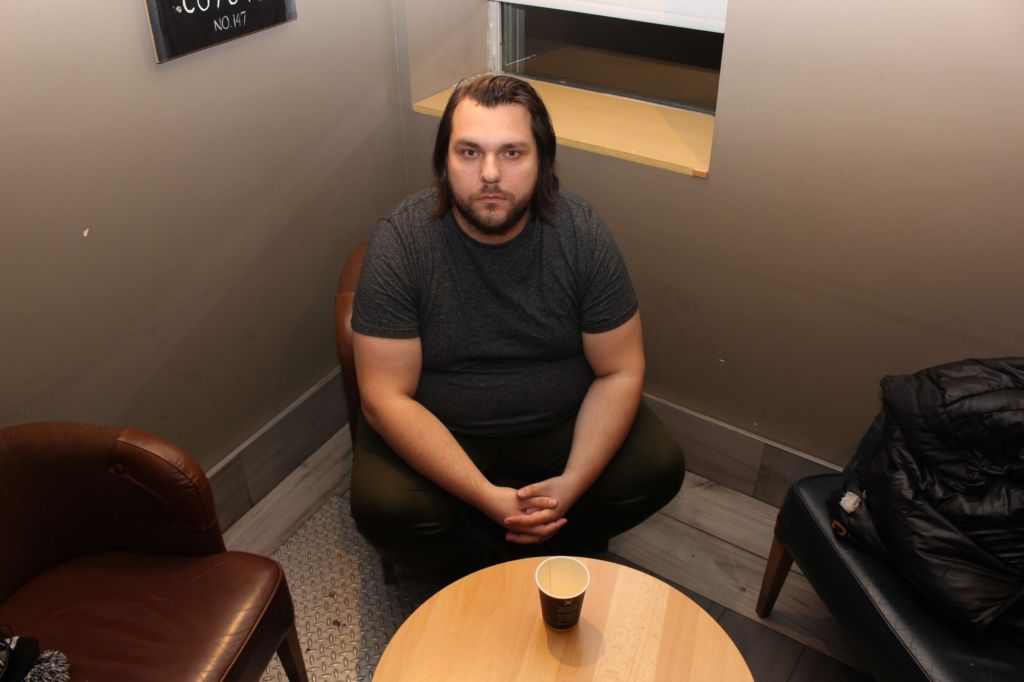 The roaring crowd, the colourful lights, the illuminating music and local musicians are what drew PJ Catsiyannis to his love of music.

Currently working full-time at Pierino Scarfo Salon as a junior stylist for the past decade, local musician PJ Catsiyannis has released a new Extended Play (E.P) titled Don’t Give My Love Away for his new solo project, My Friend PJ.

But what got him to that point?

“Seeing them [local bands] live in my town and [got me] thinking ‘These aren’t extraordinary people, these are just regular people not living in L.A. or New York not supported by a major label just kind of doing it on their own’,” says Catsiyannis. “I think seeing that in artists that I looked up to at the time kind of gave me that drive and thought that if I write good songs I can do that too.”

Catsiyannis explains that around sixth or seventh grade he knew he was going to play in a band one day. But it didn’t really start until Catsiyannis was 13-years-old when he had started writing his own songs.

“My tastes had flourished in high school and by then I was making more connections and kind of started establishing myself,” he says.

When he was 14-years-old, he and his band at the time opened a holiday show at Ottawa’s Saw Gallery in 2002.

“After that came years of playing [and] different projects,” he says. “I took that time and practiced my trade and figured out my niche of what I was good at writing and what I would focus on moving forward.”

Around 2007 and 2008, Catsiyannis was playing in a band called Brights. Catsiyannis had recorded with and played with Brights for a few years before moving onto The Gallop, Stay Classy and his new solo project, My Friend PJ.

“You learn a lot playing in bands at that age [and] you learn what kind of people you want to play with,” he says. “My Friend PJ is my first solo effort, after playing in bands [for a long time] people don’t necessarily have time to commit to things. I wanted to do a project where I was more in control with everything and not necessarily having to rely on other people.”

Catsiyannis explained that with My Friend PJ, he is able to organize his time efficiently because he doesn’t have to work around other’s schedules. He is also able to go outside of his boundaries when it comes to songwriting because there is nothing holding him back to express himself.

“If I was used to doing things a certain way sometimes I try the opposite of that so I think I am growing as a songwriter,” he says in regards to songwriting. “Seeing these bands is what me realize I can probably do it too.”

Catsiyannis has recently released his first E.P under My Friend PJ called Don’t Give My Love Away recorded by David Gervais at Swell Studios and features Michael Laing on drums.

“PJ and I go way back,” explains Jimmy Barry, first-year radio broadcasting student at Algonquin College. “We were in a music class together in Grade 9 when we met each other and we played in bands together. His skill quickly spoke to me as something kind of on another level [compared to] most people our age.”

Barry explained that ever since high school Catsiyannis had continued to grow as a musician and had played at Bluesfest when he was in Brights and The Gallop — both bands that had released E.Ps.

“He’s already gone to college,” he says. “[But during that time] he has consistently written and released music like it was a part-time job.”

Barry explained that Catsiyannis has been releasing new songs no matter what job he had whether it part-time or full-time.

“I think fans of quality music would be happy to hear what he’s putting out and how he writes,” explains Barry. “The engaging lyrics, the massive hooks, the nice melodies. I think that people would like to see his live show because it’s entertaining.”

Catsiyannis records all his music at Swell Studios in Vanier which has been known to put out E.Ps for other well-known local bands such as The Gallop, Slack Bridges and Mushy Gushy.

“If you ask people who have been in the Ottawa scene for a decade-plus he’s a well-known name,” he says. “What he has written has always been professional and catchy but I think it’s about time more people heard his music so he can do it for a living rather than a part-time job.”

Catsiyannis’s music is available to anyone with Spotify or Apple Music and he has an upcoming show on Gladstone Ave. on Nov. 28.