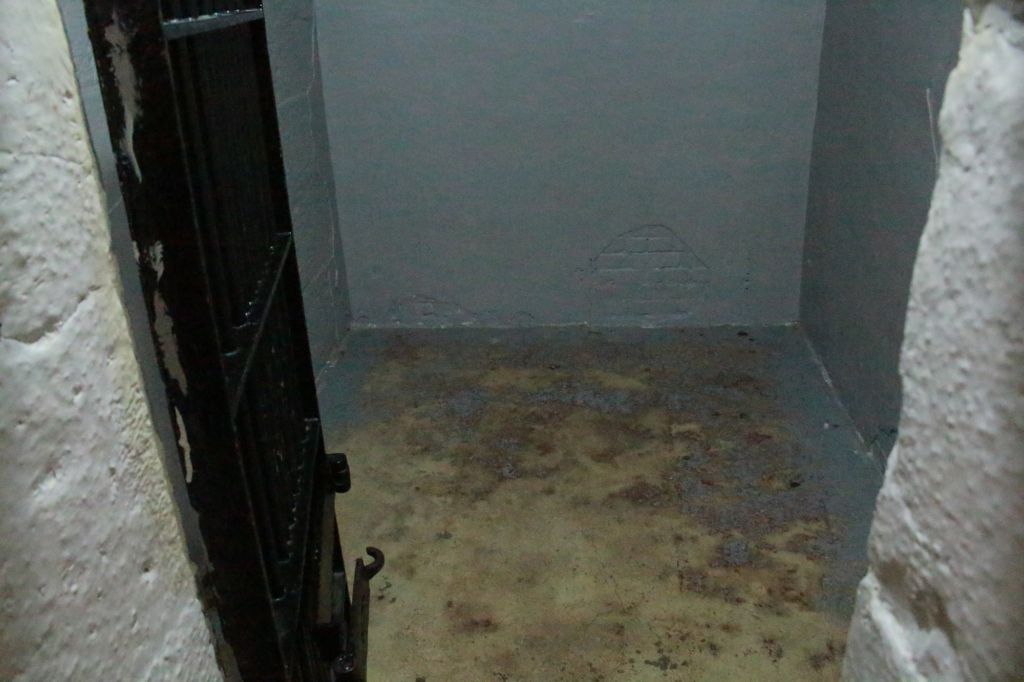 When Kelsey Sutton, a receptionist at the HI Ottawa Haunted Jail Hostel, goes into the solitary confinement cell on the second cell block of the 156-year-old building she always has the same, unpleasant feeling. “This room doesn’t sit right with me,” says Sutton, a former University of Ottawa criminology student. “I always get a tingling feeling in my arm whenever I come in here.”

Walking into the small square room with her, I’m more astonished by the brutality of the cell than anything supernatural. Two chain holsters are bolted into the ground so past inmates could be held in place. And does that word carved into the wall read “hello” or “hell”? Is it the work of a past prisoner?

The devil’s hour is said to hold evil, however. Two nights before Halloween, I set out to find out if the rumours are true: is this place really haunted? Will I have the same tingling feeling in the building that Sutton has had?

Now, let the record be set straight: I am a sort of quasi-atheist. While the idea of anything supernatural existing is preposterous to me, there still exists a hint of doubt. Full disclosure: ghosts, demons, spirits – they all scare the living shit out of me. So I decided to spend the night at the hostel – along with about a dozen or so other guests – to find out the truth.

But first, some background. Let’s delve into the history of this enigmatic Ottawa experience.

The Ottawa haunted jail is located on 75 Nicholas St. and serves as both a tourist attraction for those fascinated with the macabre, as well as residents of Ottawa in search of the supernatural.

Originally named the Carleton County Gaol, the jail was designed by Henry Horsey and constructed in 1862, 156 years-old. Placed next to the courthouse, there was, in fact, a tunnel that connected the two establishments.

The jail is reported to have a plethora of atrocities that occurred. Including undocumented hangings coupled with revolting living conditions, that even a torturer couldn’t hold a candle to.

For example, according to my tour guide Morgan Sibbit, a Carleton University student doing a bachelor of global and international studies, the jail held up to 150 prisoners including women, children and men. Some were forced to share cells, although women and children were segregated from the general population. The cells consisted of small ones (1 by 3 meters) and large ones (2 by 3 meters).

The inmates included murderers, the mentally ill, as well as others detained for small infractions such as public intoxication and prostitution.

However, there were also three recorded executions that occurred at the jail. The first and most notorious one was that of Patrick J. Whelan, the man who was accused of killing Irish politician and journalist, Thomas D’Arcy McGee. The second one was that of George Seabrooke, convicted of murdering a gas station attendant by the name of Paul Lavigne. The third was Eugene Larment, who was convicted of murdering detective Thomas Stoneman during a robbery. (Larment claimed he was too drunk at the time and was unaware of what he was doing.)

However, it is Whelan’s spirit that is said to haunt the building to this day, among the other tortured souls that are rumoured to dwell at the jail.

But back to me and my adventure. When Sutton went on her way, leaving me alone in the room, I decided to get some footage of the space.

While recording, the only way I can describe it is that I felt “off.” Regardless of this, I got the footage and began to pack up to go to the gallows on the eighth floor of the jail. It was at this point, that my tape recorder began playing in my bag.

This could be logically explained because I had already turned it on. However, it wasn’t the tape recorder playing by itself, it was the fact that what started playing was a segment I had recorded upon arrival to the jail. For that recording to have played, you would have had to literally scroll down through the two or three recordings I had already made. It was at this point that I began to actually feel scared.

We went to the eighth floor of the jail. The air suddenly became cool. When you get up there, you can turn left or right. Left leading to death row and right leading to more decrepit cells. We turned left. I could literally feel my heart racing. Walking further in, there was a big set of double doors that actually led to the gallows.

While Sutton didn’t want to go any further, I insisted on opening the door. The first thing I saw was a pile of what looked like relatively fresh vomit on the ground. I took one look down the hallway, looked at Sutton and promptly said, “fuck that.”

That was where my exploring concluded. I returned to 1 x 3 cell because, frankly, I was really scared. And my cell is a lot more comfortable then you’d probably imagine. But before I did, I went to say goodnight to some of the travellers I’d met.

Among them was Daria Ziuban, a visitor from Poland. She’d been staying in Ottawa for just under a week. “There is so much pain in these walls, this place is alive, but it’s also dead,” says Ziuban.

Ziuban wasn’t the only tourist I met. Enrico Koggel and his girlfriend, Lisa Kleine Schaars are visiting from Holland. Their experience has been less spooky. “I mean, I haven’t seen anything scary here,” says Koggel. “The tour was definitely creepy, but I didn’t see anything.”

They weren’t alone in this. No one I spoke with admitted to seeing anything supernatural. In my case, the skeptic in me denounces the idea that anything happened beyond logical explanation.

But something did happen. While it was small, almost trivial, it was enough to warrant second thoughts.

We’re all confident in our beliefs – until something happens that causes us to question everything.