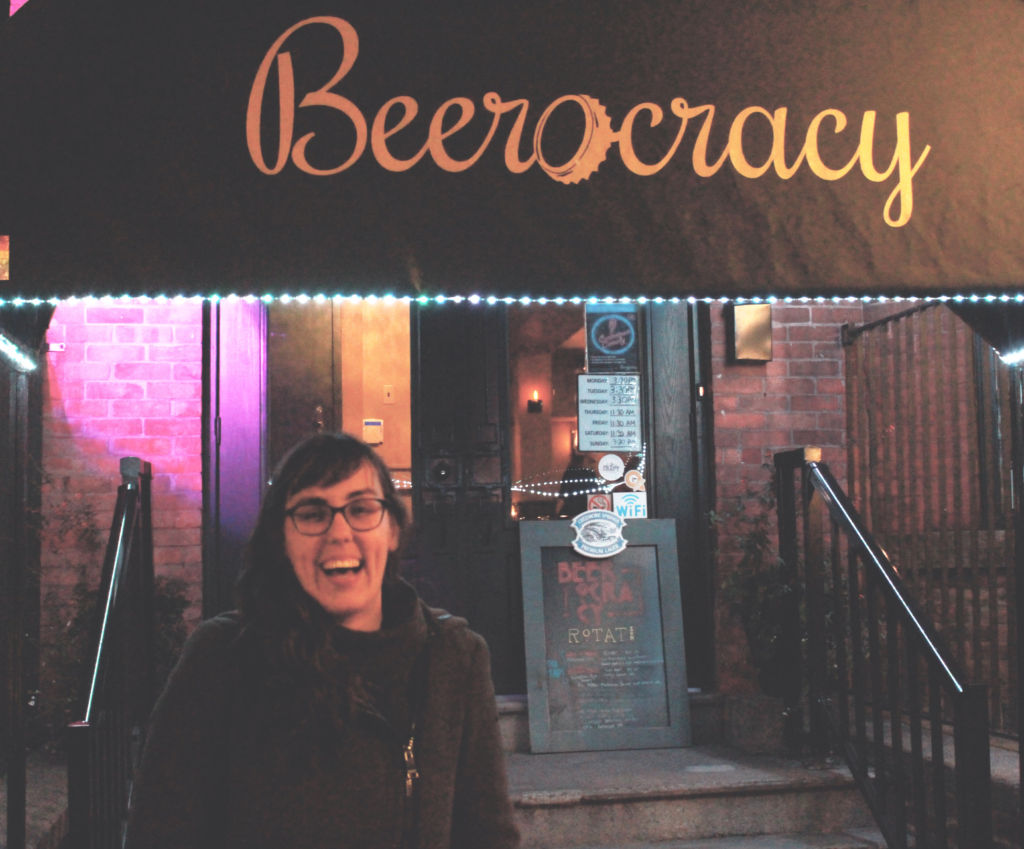 A couple years ago a comedy show in Ottawa with an all-female lineup would have been like to trying to scrape the bottom of an empty peanut butter jar; not enough to fill a sandwich.

Now, there’s plenty of peanut butter to go around, and oh, more female comics to fill a show’s lineup. Female comics in Ottawa are more active than ever and crowds are peeing themselves.

More females are signing up for open mics at different comedy clubs across the city. For women today, it wouldn’t be possible without the female comics who gave it a chance a few years ago, and said fuck it why not? Today there is still more male comics than females on a lineup but that ratio is slowly changing.

And now some female comics have even started producing their own shows.

Christina Muehlberger is one of the hosts for Centretown Comedy at Beerocracy, which runs every Thursday at 8 p.m. Muehlberger has been on the scene for about a year now and is already addicted to the challenges of stand-up comedy.

“It’s so exciting when you make people laugh, you’re like, I did that,” Muehlberger says.

Muehlberger started off doing improv for two years before she gave stand-up a try and found it addictive right off the bat. After being on the scene for only a short time Muehlberger is seeing a change with women in comedy.

“There’s more all-women spaces happening which is really exciting and it shows just how many women are coming on the scene. There are women being turned away from these shows which I don’t think was the case four or five years ago so that’s amazing,” she says.

Muehlberger hosted her first weekend at Yuk Yuk’s this past August and had a great response. Her improv skills helped her to be looser on stage and she found it to be a fun challenge trying to work with crowd members.

Muehlberger would like to see more female voices on the scene and more of a 50/50 divide of males and females on a lineup. But, for the women on the scene right now, it’s really a tight knit community.

“We’re trying to build each other up and make sure we feel safe and empowered in different spaces. We really support each other, but there’s also a lot of men on the scene who are really encouraging to women,” she says.

Muehlberger performed at an all-female show this past September hosted by some fellow female comics who are also dominating the scene in Ottawa.

When Laura McLean started stand-up in Ottawa there was only a handful of females doing comedy actively. Now the three producers are able to get different lineups of females for every show.

“I wouldn’t have thought it would be possible till right now to have a monthly female comedy show where you could have a different lineup each month,” McLean says.

This past summer, McLean thought it was time for Ottawa to have an all-female comedy show. So far The Fembassy has had two sold out shows in September and October, with another one on Nov. 24. Women from all levels of comedy are encouraged to try out whatever material they want, in a safe and supportive space.

“I’m kind of hoping that if we have that specific show, women who want to do comedy will come and see that there are a ton of funny women in Ottawa and they’ll also have the confidence to join as well,” McLean says.

McLean feels more comfortable with her own style in comedy and has grown to believe in herself and her material.

“If I do jokes that are specific to being a woman and it doesn’t go well because the crowd is mostly male, I’m not going to throw that joke out and I’m not going to rewrite it because I understand it was either a one-off thing or because the audience isn’t connecting to what I’m saying,” she says.

McLean also co-produces a show called Laura & Kennedy Pull an Alt-Nighter, with fellow female comedian Kennedy Ryan. McLean likes to do more alternative comedy on this show and never feels she has to compromise her style.

Another producer of the Fembassy is Dani Alon. Alon is the education director and co-founder of The Improv Embassy and started stand-up comedy about a year ago.

After the Ontario election this past summer, Alon thought the results were pretty depressing and posted in a Facebook group she created called, Women in Comedy Ottawa, about wanting to start a comedy show with an all-female and non-binary identified lineup.

That’s where McLean reached out to Alon and expressed similar interests in starting a show where women can feel comfortable on stage to express their style of comedy. Chloe Barker is the other producer of the show and landed the venue at Pressed cafe in Ottawa.

“A lot of people have been starving for this kind of content,” Alon says.

Pros can use it as a place to take risks by trying new jokes and beginners can test out their new material.

“My hope through this show is that women and non-binary folk can see themselves represented on stage and that can empower and encourage them to sign up for any other open mic nights in the city. I want to show them comedy can be for them too,” Alon says.

Same goes at The Improv Embassy, they offer an inclusion scholarship that would benefit someone with financial constraints that identify as BIPOC, women, LGBTQ+, people with a disability and people who are 50+.

They want people of all backgrounds to have a place where they can express their voice and grow as a performer, and gain confidence to perform wherever they want and feel comfortable with who they are.

Alon didn’t think it was possible or an option to start comedy in Ottawa, until she saw women like McLean doing it. Now Alon says her priority is to lift up other women and encourage people to develop their own voice as an artist.

“Do the kind of comedy you want to do. If you’re a woman in comedy you probably have something to say that hasn’t been said yet,” Alon says.

Women on the scene are encouraging others to be fearless and give comedy a try if they want to, no matter who seems to be dominating the lineups.

Muehlberger says females should just, “Do it. Try it. It’s hard and exhausting but it’s super fun and energizing all at once.”