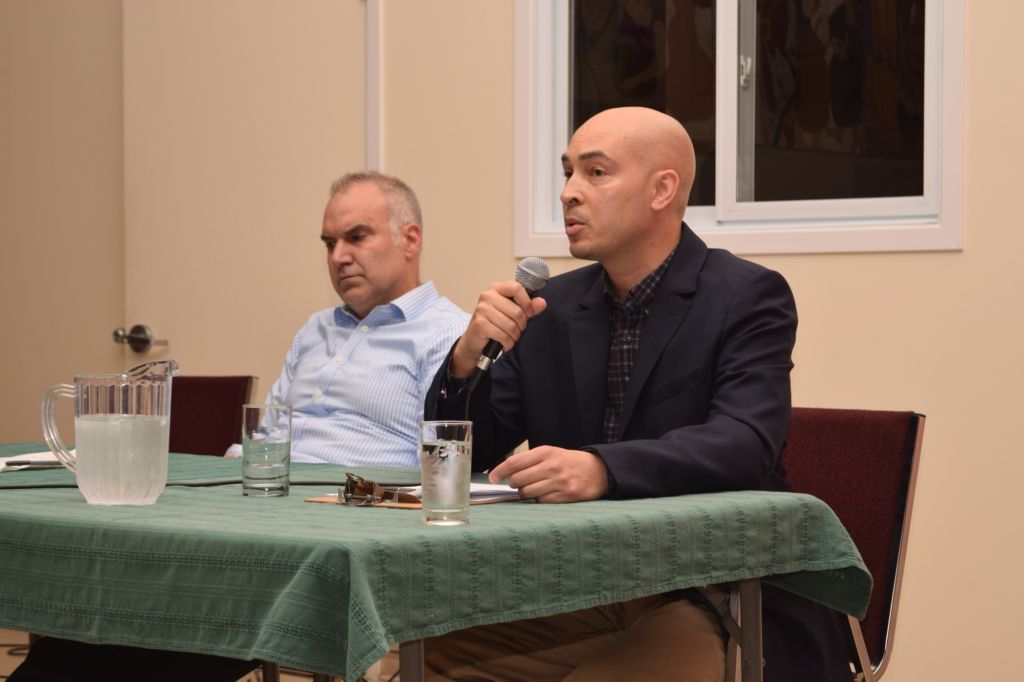 “We are beginning to see some of the effects of climate change right now – the terrible forest fires, the huge storms, the floods right here next door in Gatineau, the tornadoes that we just saw,” said Jorge (George) Sorger at the Oct. 9 all-candidates’ debate for the Rideau-Rockliffe ward.

Sorger, who was the event organizer and a volunteer with Ecology Ottawa, introduced the evening’s debate on climate change by reiterating the Intergovernmental Panel on Climate Change (IPCC)’s alarming report issued on Monday.

“They warned us that if we did not stop using fossil fuels and increasing – or even keeping – the level of greenhouse gases the way they are, that we are in for a catastrophe,” said Sorger.

The incumbent, Tobi Nussbaum and Heyck, were sitting at a green desk in St-Bartholomew’s Anglican Church in the presence of more than 50 people.

Four organizations had co-sponsored the event and had prepared questions for the two candidates. A representative from one of the co-sponsors, New Edinburgh Community Alliance, submitted a question in regards to improving the usage of the green bin.

“Education is the key,” responded Heyck. “I’ve seen some studies that up to half of what residents are putting in their garbage can be diverted to recycling bins.”

Other topics discussed included Ottawa’s target to reduce 80 per cent of its greenhouse gas emissions by 2050, energy efficient buildings, protection of green space and waterways and the use of plastics.

“I would like, if elected to council, to ban single-use plastic products,” said Heyck, which was met with a round of applause.

Nussbaum also mentioned later in the evening that he was one of only three councillors among 25 who voted against the inclusion of plastic bags in the green bin program.

“This was going to cost more for the taxpayer and reduce the quality of the outgoing compost that comes out of this,” he said.

A middle-aged woman brought up the number of multinational corporations that are planning to build a massive dump for nuclear waste at Chalk River. She expressed her concern for contamination of the Ottawa River which is less than a kilometer away.

Although Nussbaum agreed that ways to safely dispose nuclear waste need to be discussed, he added that “we cannot decarbonize without nuclear power.”

Heyck agreed that nuclear energy cannot be eliminated at the moment, but the waste site does need to be moved.

The crowd chuckled as an elderly man in glasses referred to the delay in the light rail transit ( LRT). He proposed that once the LRT is up and running, it create an incentive to take public transit by reducing bus fares and increasing parking fees in downtown. The idea excited some of the members in the audience.

“If we are trying to encourage more people to use public transit, then we need to do something about the fares,” said Heyck, who is against the idea of increasing fares. Nussbaum agreed and noted that the monthly PRESTO charge is the second highest in Canada.

In his closing statement, Heyck encouraged everyone to go vote on Oct. 22 regardless of who they were voting for. Nussbaum said that he is running for re-election as there are still la lot of issues that need to be discussed.

“Ottawa can do better,” he said.