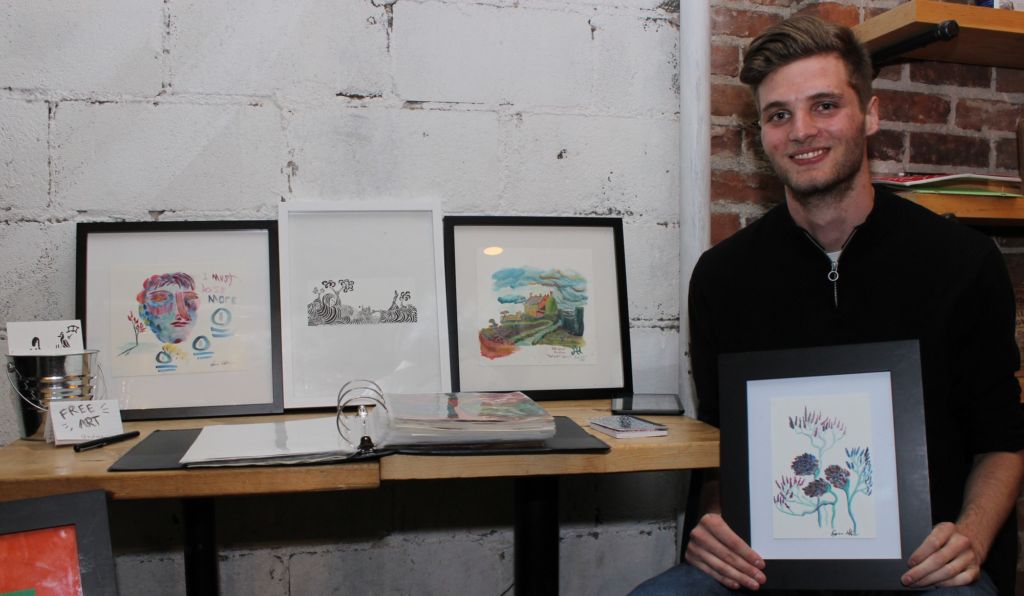 Conversation between artists and art enthusiasts can be heard under the din of crowded Black Squirrel Books and Espresso bar on Bank Street, just north of Sunnyside. There are tables lined with paintings and drawings and sculptures; not your usual art gallery.

The event is the Art and Oddities showcase gallery, and among the young artists in the bar is Logan Hotchkiss, a business management and entrepreneurship student at Algonquin College. The Sept. 27 event was a chance for him to not only show his art, but also to introduce himself to potential fans.

“What I wanted to do is let people know what my art was really about,” he said. “Ottawa really supports their artists, so that was what I was trying to gain. And this opportunity meant the world to me.”

Hotchkiss has played part in past events, but none like this.

“It’s a very small and very good first step for me,” he said. “It’s kind of like having a show from when I was in a band — as long as you made one or two fans you’re making progress.”

Hotchkiss was equipped with every single piece he had ever created and a bucket labeled “free art” to show appreciation to friends and Ottawa art enthusiasts who themselves appreciated what they saw.

“I practice a ton, so it’s easy to provide little pieces to spread the love,” said Hotchkiss.

Hotchkiss spends his time on the bus and during class scratching in a small notebook with a calligraphy pen, producing highly detailed product.

“I don’t really look at a specific topic and decide that that’s what I want people to perceive,” said Hotchkiss. “When it comes to being inspired, it’s so candid, like a doodle. It’s biased of how I’m feeling in the moment.”

According to Hotchkiss, his style is called abstract expressionism. He describes it as uninspired.

Aside from intricately detailed doodles, Hotchkiss works in a variety of mediums. His oil paintings are vivid reflections of his mind and emotional state.

“I don’t talk to people about my problems as much as I paint them out,” Hotchkiss said. “In a way I’m not bottling up the negative’s feelings I have and at the same time I’m not bogging anyone down around me with my problems.”

Hotchkiss is excited to continue applying the skills he is learning from his program to build his art career.

“I know why I create art,” said Hotchkiss. “And that’s why I’m able to decide what I do and how I do it.”

Hotchkiss’ art can be found on his Instagram page @hotchkissart.