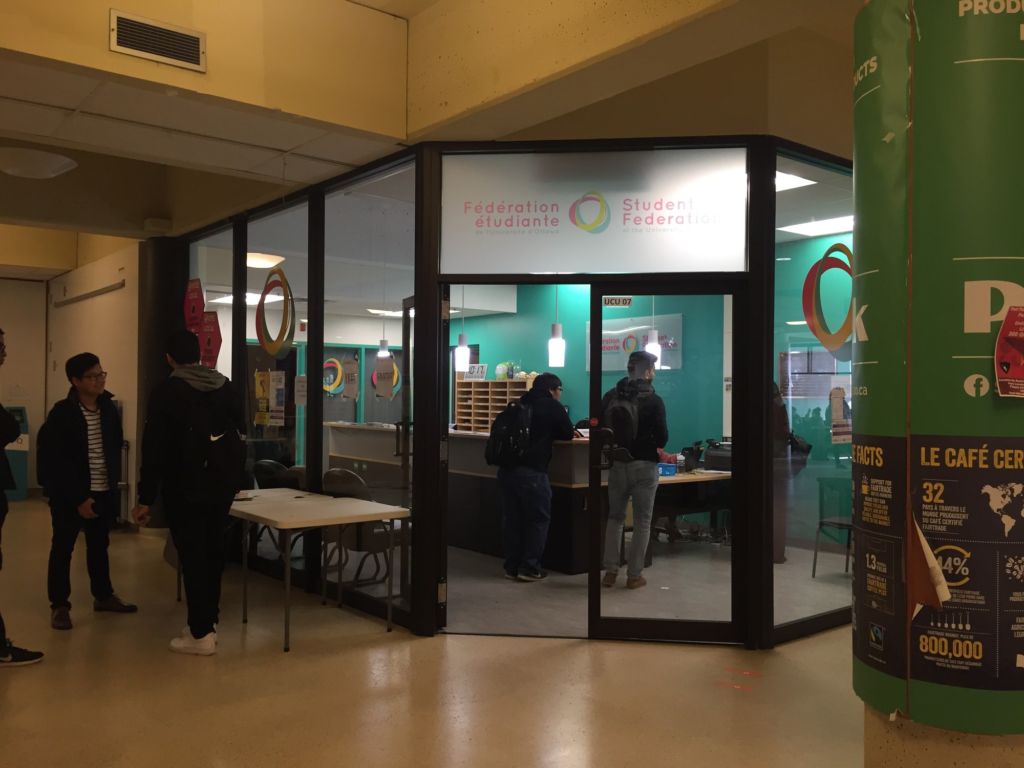 More than 35,000 undergraduate students at the University of Ottawa no longer have a recognized student government.

On Sept. 25 the university released a media statement terminating their partnership with the Student Federation of the University of Ottawa (SFUO).

This is following the allegations of fraud by SFUO executive members, which is currently undergoing police investigation.

The statement, made by the university vice-president of academic affairs David Graham, said the university has learned of “additional allegations of improper governance, mismanagement, internal conflict and workplace misconduct within the SFUO.”

Other post-secondary schools in Ottawa have structures in place to prevent such incidents from happening in their student unions.

The Carleton University Student Association (CUSA) has two designated chartered professional accountants and have annual audits to ensure standards are being met. All transactions are tracked by the president and vice-president of finance as well as the vice-president internal.

“We have a lot of different steps in place each year to make sure we are being fiscally responsible at all times and we have oversight from our financial office as well when it comes to our spending,” said CUSA president David Oladejo.

At Algonquin College, the Students’ Association (SA) runs on a governance model “that ensures the Board of Directors’ accountability through various things, such as our elections process, policies and bylaws,” SA president Deijanelle Simon wrote in an email to Glue.

When it comes to La Cité Collegiale, the students’ association isn’t a union, instead, it is run by permanent employees hired by the students Administration Council.

In an email to Glue, Frédéricke Beaulne-Séguin, president of the Students’ Association at La Cité, explained that every decision has to be run through the administration council before coming into effect. All transactions require the authorization and signature of a minimum of three employees or administrators and the bank can refuse any transaction exceeding a certain amount.

The contract between the University of Ottawa and SFUO will end Dec. 24, 2018 when the first semester of school is done.

In its media statement, the university said it is keen on starting a new partnership “with a student government that practices good governance and sound financial management.” They encourage their undergraduate students to take the necessary steps in forming a new student government.

Plans of such initiatives are already in motion.

Matthew Boulden, a student at the university, posted on his social media profile stating, “uOttawa I assure you there are hardworking people who will rise up and build a student union which is accountable, transparent and works for students.”

The group calls itself the University of Ottawa Students’ Union (UOSU) and plans to take the place of the SFUO once the contract ends in December.

In an exclusive interview with Glue, Francesco MacAllister-Caruso, who’s directing the communications of the new campaign, addressed his concerns regarding the termination of the partnership with the SFUO.

“We are basically just worried that if the SFUO stops being recognized and no one takes its place then all the valuable services that we fought for are going to disappear,” said MacAllister-Caruso.

The UOSU is in the early phases of planning but aims to change the dynamics of the undergraduate student union from it being a presidential hierarchy to a collaborative group structure.

“We are currently trying to build a constitution in the rule book by which we can operate and then once that’s settled we should have a public campaign in launch by next week,” said MacAllister-Caruso. “From there we are going to try and get students support. Once we get students support we’re going to approach the administration with a letter of intent to tell them that we plan on being the successor to the Students Federation.”

But, the SFUO has made it clear that they do not plan on leaving their office or discontinuing any of their businesses, services or programs provided by the federation.

The SFUO vowed to be vigilant in the coming weeks with the University’s administration to try and reach a resolution that will be beneficial to both parties.

“Although we are very open to working with the University of Ottawa on a new agreement, we will prepare to operate with or without new agreement. We fight every day to keep our student movement strong and we will continue to fight for the students.”

The release also stated that the president of the SFUO, Rizki Rachiq has recused himself from all financial issues and signing authority which no longer gives him the power to access any of the federation’s financial documents during the official investigation.

“We were not perfect. We made mistakes in this process because none of us have ever had to solve or anticipate what is at stake today. We acknowledge this and apologize to you, the students for our lack of communication so far,” the SFUO stated.

So what does this mean for uOttawa students at this moment?

The university’s media release stated that students “will not receive a bill in the winter term from the university for SFUO membership fees unless a new agreement is in place. In other words, the university will stop collecting these fees.”

Students are still able to use their bus passes until the end of the school year.

Concerning the on-campus businesses owned by the SFUO – Pivik, Cafe Alt, Bar 1848 and Agora bookstore – it is unclear how they will be affected by this current situation.

As for now, the university’s primary concern is focused on the second semester and making sure students will have essential coverage pertaining to their safety, security, health and wellness.