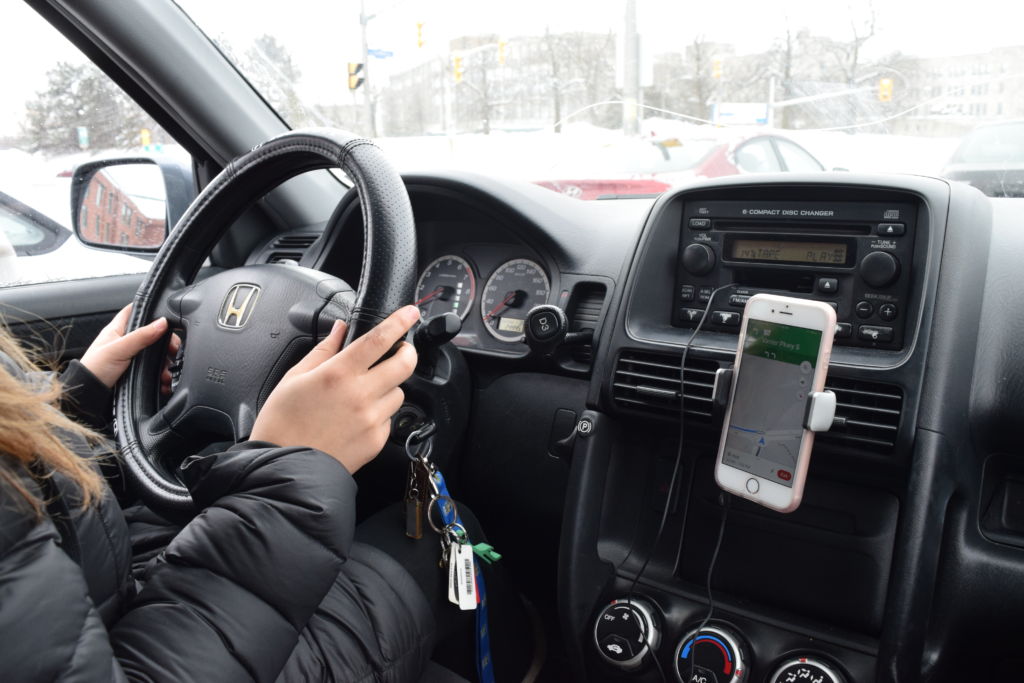 To witness humanity at its best and worst, there’s no better place than the comfortable confines of an Uber ride. Writer Kelly Speagle spoke with three young drivers and heard about some of their bizarre (and enjoyable) experiences.

Q: What’s one of the funniest moments you’ve had as a driver?

A: On New Year’s Eve I picked up this guy that looked vaguely like a guy I work with. We’ll call him Brad. Brad, his girlfriend and another guy got into the back seat and Brad had a lot to drink. The other two kept commenting on how they didn’t know how he drank so much. I think it was like two 26’ers or something ridiculous.

So, a little bit down the road Brad exclaims, “Projectile vomit!” as I’m about to turn left. I go, “Oh shit, okay just hold on one second. I’m pulling over,” I make it to the side of the road and Brad gets out. Me and the other two figured he would’ve just hurled just outside the door, but he decided to take a walk to a nearby fence.

When I get to work for my next shift, one of my other co-workers goes “Here he is! Pat, the Uber driver of the year!” Turns out Brad was the guy I work with. He came in for his shift and was like “Yo, Pat was my Uber driver last night!” We didn’t really talk too much before that, but we’ve become good buddies since then.

Q: What do you enjoy about being an Uber driver?

A: One of the reasons I like driving is because I get to tour around the city and sightsee, while meeting new and interesting people. I’ve met people from across the globe like France, Australia and Scotland. Though I’m a quiet person, I have no problems chatting with anyone that gets in and I enjoy it quite a bit. It’s an adventure. I have no idea where I’ll end up when I log in.

Q: What is the craziest story you have as a driver?

A: A favourite of mine happened last year where a group of 16-17-year-old boys had forewarned me of their friend who was obviously inebriated in some way. I had a minivan and he was sat in the farthest seat while his friends were in the middle. During the ride I’d check my rear-view every few minutes and he was curled up in the fetal position and was sort of rocking back and forth looking dismayed. I asked if he was okay and they informed me that it was his first time doing acid and that he’d be fine. I kind of shrugged it off and continued on. The next time I looked back, he was completely naked. I was so shocked that I started laughing hysterically while his friends tried to get him clothed again.

Most things are usually pretty annoying in the moment but are hilarious looking back. Like this one time a guy hid in my back seat after having dropped his friends off only to pop out five minutes later in an effort to scare me.

Q: Are people usually pretty willing to chat and be open about their lives or are they pretty closed off?

A: I find it can go either way. I can either be a counselor to the person or I don’t even exist in their mind. I’ve helped plenty of women with relationship advice or friend troubles and I once was giving a man a pep talk before he proposed to his girlfriend. I thought I’d never hear of the outcome but he had left a driver comment for me saying “She said yes!” and my day was made.

Q: What’s a memorable story you have from being a driver?

A: I remember a brother and sister took a ride with me and during the ride she was consistently talking about money and wanted to purchase some stuff. She looked somewhat panicked. I suspected her initially and when I reached her given destination, I saw some cops there and she told me to wait for her as she was going to get something from the building and she needed a drive back. Her brother stayed inside the car.

As she came out from the building, I noticed her hiding something which I suspected were drugs, so I refused to drive them back and closed their trip in case to avoid any trouble for me.

Q: Do you have anything to say to anyone looking to grab an Uber?

A: Never get too drunk.

I was waiting over a red light and an Uber request popped up on my screen. The location for pickup was just after the lights. So, I pulled up my car to the side and texted the rider that I was waiting.

After 20 or 25 minutes, he showed up. In Uber, you start getting charged after two minutes of wait time. And as he came down, he offered me a good tip for waiting for him. As I started his ride, I realized where he was going was just next to the same traffic lights where I was waiting for him. So just 50 to 100 steps from where I picked him up.

He was so drunk that he didn’t realize where he was going. Indeed, for a two-minute ride, he paid a good amount of money.