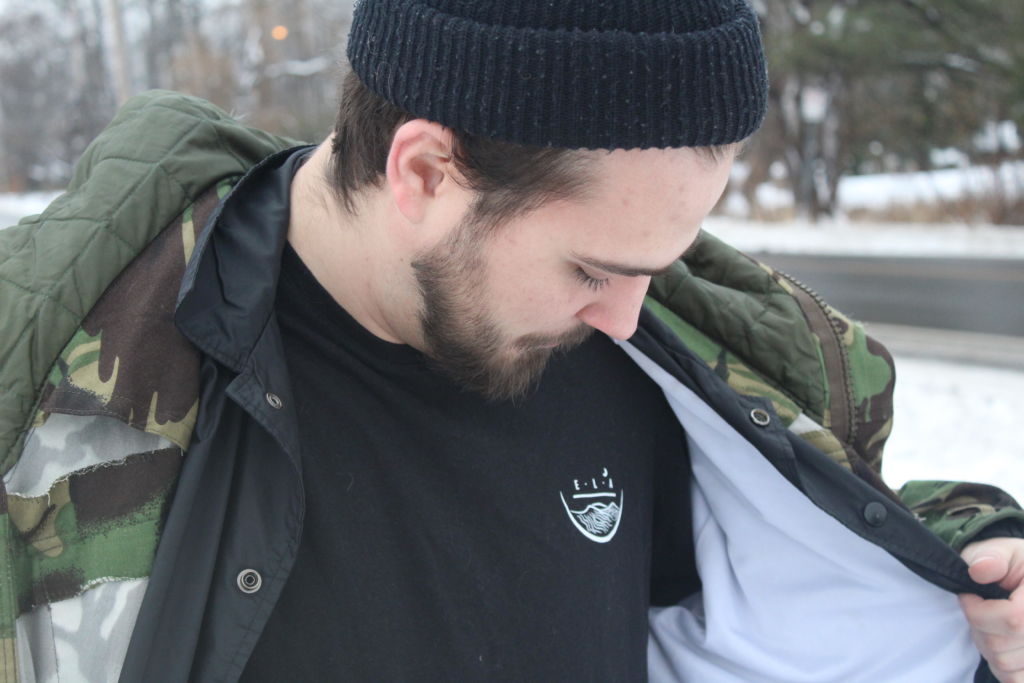 As graphic design student Alexi Costa stood in the kitchen of an Aylmer restaurant, he had an epiphany: It was time to stop dicing chicken and start designing clothes.

On a slow day in the kitchen, with plenty of time to kick around and socialize, Alexi Costa began speaking with his co-worker and long-time friend Sebastien Desharnais, about a life-long dream of his: he wanted to design his own clothing line, but he didn’t know how to go about it. He pitched different names, already had some logos and designs in mind, but that’s as far as it went.

A business-savvy person by trade, Desharnais was intrigued by the idea and said he wanted to contribute to making the dream happen. Sick and tired of dicing chicken and cleaning the grease behind the fryers, the two decided it was perhaps the right time for a change of scenery. The rest is history.

In the last couple of years, the long-time friends – joined by Patrick Lozinski – from the Gatineau region have put together a project which they claim to be something significantly new and different to any other clothing line in the world: the most affordable hemp-based street-wear clothing on the market.

The project is a company called Elevated Life Apparel, ELA for short. It’s a brand of unisex sweatshop free t-shirts, made out of 55 per cent hemp, which they say promotes “living life with an open mind and to its fullest in order to reach one’s maximum potential.”

Now, looking back on the launch of their brand, the people at ELA have learned many valuable lessons about not only the business world, but it’s opened their eyes to the grim realities of adult life. “You really have to work your ass off man,” says Lozinski, 22, co-founder of ELA. “People aren’t just gonna buy your stuff. If you want something you really have to show it and put it right in their faces. That’s been the biggest challenge so far.”

And that’s what they’ve done so far. With all three co-founders busy pursuing their respective career goals, it hasn’t been easy. Lozinksi is a self-employed video director and producer. Costa handles the busy life of a full-time student. And Desharnais stays involved in separate business ventures altogether. This has made it tough for them to put all of their energy towards what Lozinski refers to as a “passion project.” However, he says, with the limited time they have, they’ve done everything they can to live up to their brand’s identity.

“We wanted to be the most affordable hemp streetwear brand,” says Lozinski. “Right now, hemp t-shirts are like $45 or $50. We’re doing them at $30, which people still think is pretty pricey. But, to our knowledge, these are the cheapest you can get in the world.”

One of the goals of the company is to provide an option for fashionable, high-quality clothing at a lower price. Most street-wear brands usually sell either expensive high-end clothes or inexpensive clothing with sub-par fabric.

Conceived in the kitchen of a rotisserie chicken restaurant in Aylmer, the founders’ stories are cooked into the brand’s humble beginnings.

As the one who came up with the idea, Costa plays a crucial role in the company. He’s the person behind every logo and every print that give ELA it’s unique look and identity. “ELA was just a result of discovering myself in my own visual identity and expressing how I felt at the time,” he says.

The main emblem of the company, a fictitious species of bird designed by Costa, which he refers to as an “Egyptian falcon,” is embroidered on the sleeve of every shirt. Every print is meant to reflect elevation, and all are his own original designs.

Then, there’s Sebastien Desharnais, a 22-year-old real estate agent and entrepreneur. He’s in charge of the business side of things. He handles relations with suppliers and meeting with retailers in hopes of finding ways to sell and promote ELA products.

Last but not least, there’s Patrick Lozinski. The 22-year-old CEGEP dropout left school after receiving numerous job offers in his field. He is now a somewhat well-known video director in the region. He’s filmed music videos for musicians in Montreal all the way to Brooklyn and has done countless promotional videos for skate-boarders, tattoo-artists and festivals. His role with ELA involves social media relations, the website, promotion and everything that is photo and video.

Costa credits him for the final push that officially kicked off the business. He made one of their life-long dreams a reality. “At the start it was kind of just talking and nothing really happened,” says Costa. “But things started to get more serious when I went to talk about it with Pat.”

Now, ELA has its own website, which has been up for almost a year, where folks can shop for the uniquely designed hemp t-shirts. They come in four different colours – white, black, grey and rust red – all with their distinctive designed print on the front and back of the shirt, including the falcon embroidered on the bottom-right on of the back side.

The site also explains how to properly wash the items to ensure the quality of the fabric and prevent shrinking, which hemp clothing can do if mishandled. When properly handled, however, shirts made out of hemp fabric are softer than most other fabrics. It provides a lighter feel than perhaps a shirt made out of cotton.

“Hemp gives you a lot of love, but you gotta give it back,” says Lozinski. “You have to wash it less. It’s really comfy, it breathes well, but you have to just care for it more.”

So far, the brand hasn’t had much financial success. With the vast majority of sales accounting to family, friends and promotional usage, monetary profit has yet to fulfill itself – not being the brand’s priority in the first place.

But, with plans to keep promoting the brand through social media, namely via music videos from notable artists which he is directing, Lozinski is especially optimistic about what could potentially happen for ELA in the near future.

“I’ve had numerous people that want to represent the brand and wear it during videos and stuff,” says Lozinski. “It’s just that we’re kind of like at a crossroads where it’s hard to give away free stuff for promotion. I’ve got a few things planned out.”

Lozinski is a big believer in living life free-spiritedly, free-minded and to its fullest, which is the very foundation ELA stands on. The guys have also discussed bringing other types of clothing into the ELA collection, such as hats and sweatshirts.

However, with all three co-founders heavily consumed by their respective careers or educations, it’s difficult for them to prioritize the clothing line over everything else. Working via desktop, with piles of shirts taking up the space in their closets, it would be nice to move some, of course. But for now, the guys are simply focusing on living life one step at a time.

“We’re just trying to be like a nice wholesome brand of cool stuff,” says Lozinski. “We’re all doing our own things for money. This is kind of like a passion project. If it works out we’re gonna be all so happy and we’re gonna be able to just have fun living, man.”