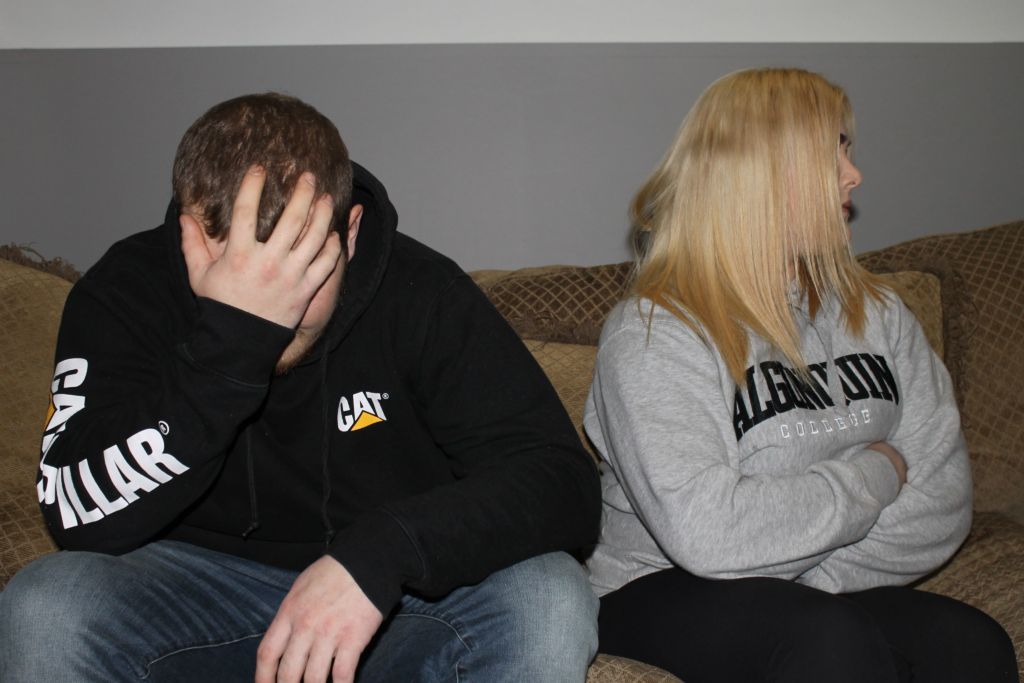 As we continue to hear on the news or see on Twitter, Trump refuses to be “taken advantage of” by other countries any longer. This could be the worst breakup story ever.

So Canada, grab a tub of ice cream and get your tissues ready. It could be a bad one but something tells me we’ll be okay. Everyone goes through breakups. Some worse than others.

Glue spoke to Ottawa students to find out if anyone has had it worse than North American trade in 2018.

Anna Mull dated her high school boyfriend for a year and a half. In her eyes, they were perfect. Until she walked in on him with another girl at a party.

“I didn’t say anything. I just walked out and enjoyed the rest of the party,” says Mull. “When I asked him if they had kissed that night he kept telling me they didn’t kiss at the party.”

After a few weeks of banter, he finally admitted he had kissed someone else. Mull instantly broke up with him. After the official split, he continued to beg for forgiveness. A few weeks later, he started dating the girl from the party.

“He would continue to drunk text me and tell me he loved me and that he made a mistake,” says Mull. “All while dating this other girl.”

Nearly a year later, Mull and her ex don’t speak to each other. However, thanks to mutual friends, she still hears stories of him getting drunk and asking about her all the time.

*Paige Turner, 18-year-old uOttawa student
In grade 11, Paige Turner dated her ex-girlfriend for a couple of months. Because her girlfriend was not out of the closet yet, Turner found it difficult to be a normal couple.

“It was also my first relationship so it was just destined for failure,” says Turner.

The week before Valentine’s Day, Turner ordered her new girlfriend a gift before heading on vacation with her family. While on vacation, she sent her a message to confirm their plans for Valentine’s Day. Instead of confirmation, she broke up with her.

“She said she needed to figure things out and wasn’t ready to date,” she says. “I spent the rest of vacation bummed and had to regift her present.”

According to Turner, less than a month later, her ex came out to everyone and began posting online about how lonely she was.

“What adds a layer of complication these days is the complicating factors around social media,” says Glickman.

“These kind of situations make healthy boundaries challenging to negotiate,” he says.

*Brett Smith, 18-year-old Carleton student
At age 15, Brett Smith had been dating his ex for only about two months. She dumped him when she realized their relationship wasn’t making her previous boyfriend jealous.

“I was fine with the breakup,” says Smith. “But as she dumped me, she said a lot of extremely hurtful things.”

At the time, Smith wasn’t in the greatest mental state, stemming from feelings towards being adopted. She was aware of this but still chose to use this against him.

“She said exactly this: ‘I don’t want to date a failed abortion’,” he says.

Afterwards, she returned a hoodie of Smith’s after taking a lighter to the hoodie strings and writing the word “fag” across the front in sharpie.

Jamie Broomfield, 32-year-old Algonquin student
In April 2017, Jamie Broomfield and his girlfriend at the time moved in together. With a previously rocky four year relationship, by September, the two decided to part ways and agreed they were toxic for each other.

“The next three months were a living hell,” says Broomfield.

Broomfield remembers loaning her his car to keep peace and her using it to meet other guys to hookup with them. He remembers the many hurtful texts he’d received from her following the breakup.

“She would say she hoped I’d die, then follow up with asking for a favour,” he says. “I’m also allergic to nuts and she threatened to leave peanut butter all over the house.”

Broomfield experienced this all while working full-time and being a student during the Ontario college strike. He only felt the tension begin to fade about two months ago.

*Sue Cliff, 20-year-old uOttawa student
Sue Cliff and her boyfriend had an on-again-off-again relationship for about two years. This past year, Cliff found a house for the two to rent. He was living in a different province at the time and was supposed to move to Ottawa while Cliff finished school. When she found out the house had been taken, Cliff was upset and wanted to call him.

“He said he’d call but he was at a party and never did,” says Cliff. “I didn’t hear from him the next day. He texted me that night saying he couldn’t talk and needed to figure stuff out.”

Out of concern, Cliff called his house and his grandparents told her that he would call her the next day. After not hearing from him once again, three days later Cliff booked a flight to their hometown.

“I went to figure out what was going on,” she says. “But then he broke up with me over text.”

Unable to cancel her flight, Cliff headed home regardless. Just recently, things officially ended and they agreed to be just friends. Cliff decided to block him on all social media to help prevent herself from reconnecting with him.

Tomás Ramos, 23-year-old Carleton student
Tomás Ramos and his ex girlfriend started dating when he was 15. The relationship ended abruptly two years later, after a joke that had gone too far. They ended up in the same summer school and still had feelings for each other.

“One day I told her I still loved her and she told me she loved me too, but wasn’t ready for a relationship,” says Ramos. “The very same day I found out she had been in a relationship with someone else for two weeks.”

Out of distress, Ramos deleted her number and blocked her on Facebook. She continuously tried adding him again so he decided to add her back on Snapchat.

“I found out she was engaged and just had a baby,” he says. “She sends me messages of her and the baby, telling me the baby says hi.”

*Tara Lee, 19-year-old Algonquin student
When Tara Lee’s most recent ex boyfriend first came into her life, she was not over her previous ex. Because of this bumpy start, the two were up and down for four years. Their most recent up lasted just over a year.

“In that year he cheated on me. I chose to forgive him and everything was great,” says Lee. “Then come September, we weren’t getting along. We broke up but continued seeing each other regularly because of mutual friends.”

Although they weren’t official, Lee continued to do anything he asked of her. She would make his lunches, clean his room and his truck, buy him gifts and make him dinner. All while getting nothing in return. After helping him move into his new home, he started seeing someone else and cut Lee out of his life.

In Lee’s eyes, she treated him like a king and in return he is ruining her life.

Canada’s trade relationship with the United States has never been more hostile. In a sense, you could say Trump is breaking up with their trade partners.

With Canada and the United States specifically nearing a potential breakup, it may be important for us to make boundaries. So, stay away from Trump’s Twitter, ignore his negative tweets about Canada and don’t creep the tweets of whatever country he replaces us with.