Spring 2018 reading week is soon upon us. Some may enjoy time to relax, others might actually get some work done — like the name suggests. But how likely is it that you’ll actually follow through?

The expectation for students is to spend their time off catching up on school work, which some may do, but how many students really use their time for reading? How beneficial is reading week?

In many cases, students spend the week basically keeping busy with anything but reading.

According to travel.gc.ca, spring break is one of the most popular times for Canadians to travel. More than a few students, admittedly, think of it as a chance to rest or get more hours at work. So why does this break happen in the middle of the semester?

Doing schoolwork over the break is a good idea, but it is equally important for students to catch their breath. Students are prone to anxiety and depression and need time to recoup. A week break may not eliminate mental health issues around campuses, but it definitely can help.

Ottawa students are not afraid to admit that schoolwork will definitely not take up all of their time next week.

While Max Le, a fourth-year uOttawa health sciences student, may not spend his week studying, he agrees the break is helpful. “Not only does it offer students the opportunity to catch up on readings or homework, it can also be beneficial for their physical and mental health too,” says Le. “Many students’ mental health would be worse off if it wasn’t for [the break].”

Because of the exhaustive process that post-secondary school can be, getting away from it for a short period of time can be extremely beneficial. “In a way, it can rekindle motivation and refuel productivity,” he says. 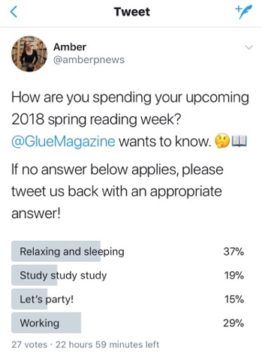 Glue asked 27 students via Twitter what they have planned. With 37 per cent in favour of relaxing, the majority ruled.

Radford doesn’t believe his grades benefit in any way because he will not be doing anything school-related.

“I think the number one benefit would be the time to just relax and not have to worry so much about school,” he says. “Students have a whole lot on their plates and it is important to try to enjoy life as much as you can before you get into the real world.”

When the addition of reading weeks became more common, the underlying reasons for the break involved widespread presence of mental illnesses.

The same study showed the most common cause of student stress is academic pressure and mental health issues.

Kory Piamonte, second-year criminology student at Carleton, is all for the time off. “It’s great for relieving stress,” says Piamonte. “Not only do you get to take a break and calm down a bit, but it’s also an opportunity to catch up where you’re behind.”

Piamonte tries to balance school work and fun, to be sure to still take some weight off of his shoulders.

“My mental health would be affected if we didn’t get a reading week,” he says. “As well as my motivation.”

What is the real point of reading week? If the week was truly meant for students to reach a better position mentally and academically, why are students given assignments due as soon as classes resume?

Students can choose how to spend their spring break, but it may just fall back on them if it isn’t spent studying.

Tim Pychyl has been teaching since 1987. He is currently a professor at Carleton University teaching an introductory course in the study of personality. He specializes in researching procrastination.

“For highly conscientious students, the reading week can be an excellent time to have time, uninterrupted by class, to get readings done or work on assignments,” says Pychyl. “For other students who are prone to procrastination during the term, they engage in self-deception by saying, “I’ll do that during Reading Week.” Of course, they leave too much until this week, and more importantly, they didn’t feel like doing their work earlier and they won’t feel like it now.”

Pychyl believes there are both advantages and disadvantages to having a spring break.

“For all students, there is at least a little break, particularly early in the week when procrastinators can fool themselves into thinking that they still can do their work later in the week. By the end of the week, their imprudence is obvious and the stress builds for these students. In our research on procrastination, we know that present-self always trumps future-self,” he says.

Reading week is a time to get away from school. Whether or not students have work to catch up on, it should still be a week to destress – whatever way that may be. Students often feel overworked, so as the academic world continues to change, they have to take time for themselves.

Our spring 2018 reading week is soon upon us. Get reading. Or don’t.