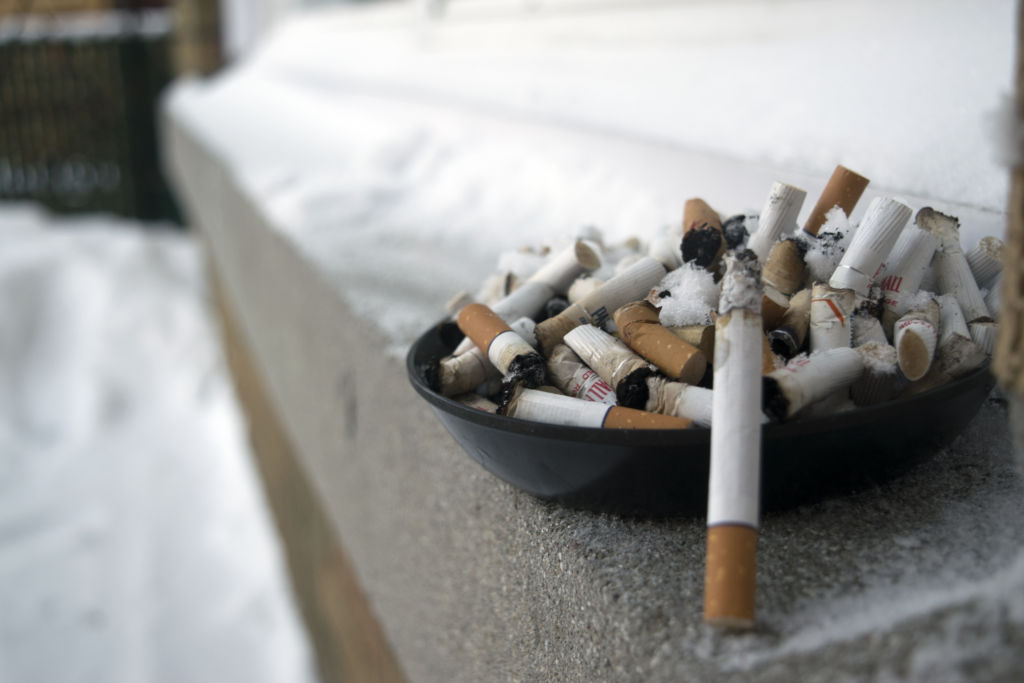 Imagine being treated as a second-class citizen for something you can no longer control.

It’s 8:45 a.m. on a cold December morning as I step out of the car and spark my lighter. I don’t even think about the cigarette or the winter wind burning my exposed hand, I’m already mentally preparing for the long day of class ahead. Each drag brings the world a little more into focus as I drift along with the tide of bleary-eyed students on our daily pilgrimage across the Algonquin College parking lot.

As we approach the media and design building, a few people stop. No words are spoken, feet shuffle and phones get checked, but there’s an unspoken bond: we’re safe here, just outside a 10-metre radius from the doors. One by one, butts are flicked and we file inside – perpetually a few minutes late to wherever we need to be.

I started on a chairlift at Camp Fortune when I was 16-years-old and if I could go back and do it over again I would. But I can’t. Now, as a college student, that teenage decision controls my daily routine.

After four years of smoking and several attempts at quitting (fifth time’s the charm?), I’ve become a little obsessed with smoking culture and the way our government, society and institutions view and treat smokers.

It’s amazing how differently smokers are treated depending where they are in Ottawa.In Kanata Centrum, you’ll receive dirty looks and occasionally be chastised by well-meaning moms trying to teach their kids that smoking is bad. On Rideau Street, the same suburbanite just keeps walking. The smokers blend in with the drug addicts, the homeless and the other rough-looking characters found in any city’s centre. In the downtown setting we’re all just second-class citizens; seen but not acknowledged.

Here’s the problem: the messaging of “secondhand smoke kills” that exploded into our culture around the millennium has since degraded into “smoking is a disservice, and you are disgusting if you smoke.”

Simply put: as a society we have gone from hating smoking for its horrible effects, to hating smokers simply because they smoke. We know climate change is bad, but nobody gets a $2,000 fine for drinking coffee from a non-reusable cardboard cup at the bus stop.

First-year Algonquin College business administration student Wael Bass describes the feeling of being looked down on as a young smoker. “Sometimes people look at you like you’re low-class because you smoke,” he says. “People don’t take you seriously, which I don’t think is right.”

He believes people choose smoke for various reasons, but once they’re hooked, institutions shouldn’t discriminate against them or ban smoking altogether. “People smoke because they’re stressed for school and because they’ve been smoking for a long time,” he says. “I don’t think they should go smoke free for whatever reason. If you don’t like smoke then don’t go to the smoking areas.”

Bass also explained that tobacco has cultural significance for Arab students. It is more accepted in their community than in mainstream North American culture. “In Arab culture we start smoking at a young age,” he says, “because our parents, our grandfathers started smoking. It clicks, either it’s shisha or hookah for example, or just cigarettes.”

For non-smokers, it’s easy to dismiss all of this. I envy my parents for having made it through young adulthood in the ‘80s without ever feeling the inclination to smoke. I also respect them for their tolerance of the misstep I took in life at age 16. They support me when I am trying to quit and they don’t persecute me when I relapse.

Their level of compassion is absent on an institutional scale. The concept of complete smoking bans on post-secondary campuses serves as evidence that smokers are being ostracized en masse.

McMaster University announced in October that as of Jan. 1, 2018 their main Hamilton campus and all other properties they own will be 100 per cent smoke free. They have declared that if you are unfortunate enough to be addicted to nicotine, it will now be even more difficult to focus on your studies because you won’t be permitted to smoke on campus. If you have an e-cigarette in an attempt to curtail your addiction, and save not only your lungs but the lungs of those passing by, you will still be treated as though you are a smoker.

The only special consideration made in this new policy is for Indigenous students using tobacco for religiously significant purposes. Students and faculty will also not be permitted to smoke in their vehicles on campus property. McMaster has essentially said that the individual rights of smokers are invalidated by the desire to present “smoke-free” as a selling point for their school.

Liv Richmond, a third-year bachelor of arts student at Carleton University, does not think smoke-free campuses will do anything to reduce the number of student smokers. “Everyone knows smoking is bad for you, but there’s this idea that you should be able to tell people what to do,” she says. “Basically, if Carleton said it’s a smoke free campus, I probably wouldn’t listen to that rule.”

Richmond has been smoking for about three years. Like most young smokers, she intends to quit someday – probably before she’s 25. But she feels finding the right time and level of life-stability is the key to quitting. “It’snot because smokers don’t care about the rules,” she says. “If I don’t have a cigarette before I go into an exam, I’m not going to be able to focus on that exam.”

She recalled many times when she can remember being treated differently because she smokes. “At the bus stop when it’s time to go home, people feel like it’s necessary to say something to me like ‘do you know that’s bad for you?’”

Of course, she knows it’s bad for her. Her cigarette pack is 70 per cent covered in warnings. But she’ll continue to smoke until she’s ready to quit, regardless of institutional policy or social pressure. She believes she’s even experienced discrimination for being a woman who smokes.

“I don’t know if it’s because of the fact that I’m a girl or whatever, but when I go to buy a pack of cigarettes the person selling them will say ‘I wish I didn’t have to sell you these’ or ‘you’re too pretty to smoke.’”

She believes that at the end of the day the decision to smoke is the same as the decision to eat fast food: If you want to consume something that you know is bad for your health, you should have the freedom to do so as long as it is legally available to purchase. 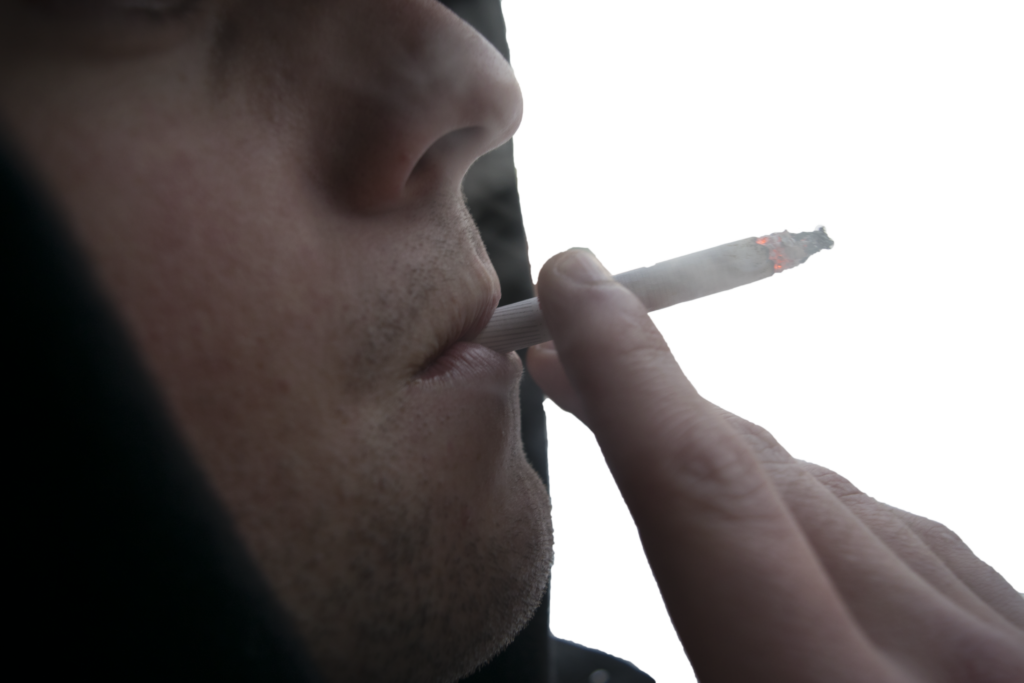 The government won’t ban smoking because it rakes in millions every year, while treating smokers as pariahs.

Ottawa University conducted a survey of students and staff in the spring of 2017 which showed a 69 per cent support for declaring the entire campus smoke free. Hardly surprising given that only about one in four Ontarians smoke.

Carol McDonald is the president ofthe Ottawa Council for Smoking or Health – the nation’s largest anti-smoking lobby group. I reached her by phone to discuss smoke-free campuses.

“We really support smoke free campuses because your age group is a sitting duck for the tobacco industry,” she said. “Almost nobody starts smoking after the age of 24 and every year in Ontario 30,000 young people start smoking.”

But after speaking with her, I feel more than ever that there is a real disconnect between what the anti-smoking groups are preaching and what the reality for young smokers is.

So far as legal rights go, the opinion of the council is that there is no constitutional right to smoke. “You cannot smoke and contaminate other people with secondhand smoke and think that’s freedom,” she said.

It has been illegal to smoke inside public spaces in Ottawa since 2001. We are one of the last identifiable groups in Canada against whom it is still legal to discriminate. The government won’t ban smoking because it rakes in millions every year cigarettes, while treating smokers as pariahs.

McMaster has said they will use a “phased-in” approach to implementing their smoking ban. For the first “few months,” if caught smoking, you will be asked to stop and referred to a cessation program. After this, students caught smoking will be followed up with by security services and issued a fine. In other words, there will eventually come a date after which smoking on campus will immediately result in a financial penalty­­­.

For those who are now thinking “well those are all fair points, but why don’t you just not smoke?” I ask you to go an entire school day without eating or drinking water and see how well you can function. That is what nicotine withdrawal feels like. Imagine if you were not allowed to eat or drink anywhere on campus – even in your own car. Smokers are just people trying to get through the day like everyone else.