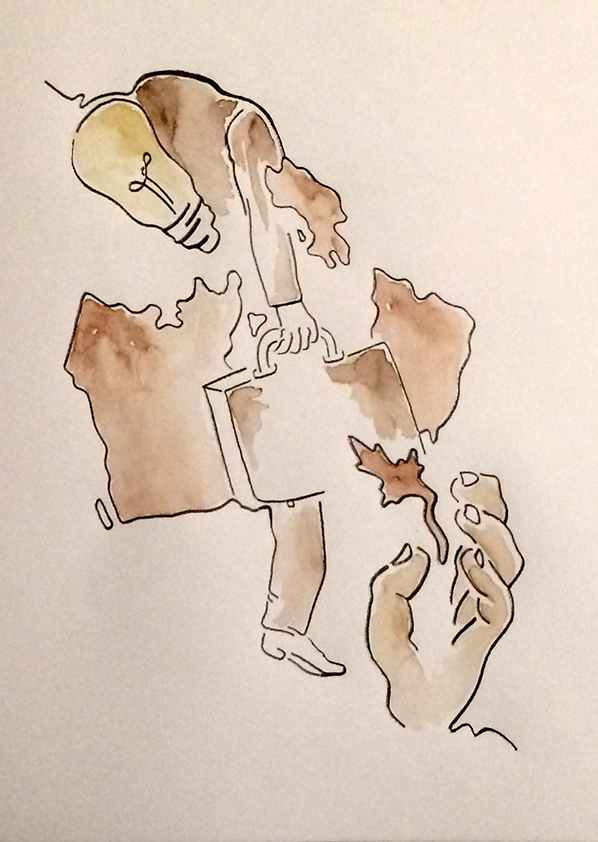 The life of a first-generation Canadian can involve a lot of tugging and pulling between two different worlds.

Having a hyphenated Canadian identity wasn’t something that really bothered me growing up. The Arab community is quite large in Ottawa and I was constantly surrounded by people that looked and acted like me.

My school mates, my friends and my neighbours were predominantly Arab, African or South Asian. We shared a common similarity. We were all some form of a hybrid Canadian, so it was easy for us to relate to each other and get along. To me, the world was only as big as my neighbourhood.

For a while it felt like I was living in a bubble. I was living in the perfect in-between. It wasn’t until my mid-teens that I started to question my identity. My family and I moved out of my childhood home and away from everything I knew.

Moving from one end of Ottawa to the next almost felt like I left the city entirely. I knew the east end of Ottawa the way I know the back of my hand. Leaving all the friends and neighbours that we became so close with over the decade we lived there was not only sad but also scary. I didn’t know anyone in the south end of the city and I wasn’t familiar with the area at all. It was a big change that I wasn’t ready to adapt to.

Once I was well into my teens, I started to pay more attention to TV and social media. At that point I wasn’t seeing anyone that looked like me being represented in mainstream media unless it was on the news. For a teenage girl, this took a big hit on my self esteem. At such a sensitive age, it hurt that I wasn’t being seen. I never wanted to coexist.

In my everyday life, labels and stereotypes didn’t affect me, but when I looked at the larger scale of things it really irritated me that I was being put into a category. I didn’t see myself as everything the media was trying so hard to portray myself and others as. I became more aware and paranoid about what people might’ve been thinking when they met me.

I’ve always been proud of where my family is from but there was a point when I figured maybe it’s best if I tone it down? I became less vocal about my family and where we were from.

From once being a proud little girl and talking about my heritage at any chance I got to becoming this self conscious teenager who kept family and school life completely separate, I felt like I started to lose sight of who I was.

Being one person around your parents and being another in public is something I think every hyphenated Canadian has dealt with, no matter where their family is from. As proud as I am of being Arab, I’m not interested in falling into the stereotypes that society has formed for me.

I resisted being a typical Arab. I avoided listening to the music, watching the movies or even eating the food. I felt like it was easier to be Canadian. Nobody questions you.

So when I visited the Middle-East for the first time as a young adult, I was shocked. For my entire life, I identified as Iraqi/Kuwaiti but the truth was, I really didn’t know much about where I was from. I got culture shock from a place that was supposed to be known as home.

Whether it be a new word or a piece of history, every day I was learning something new. I slowly began to fall in love with actually being Arab, rather than just having the title. I fell in love with more than just the language and the food. I had a whole new respect for my background. Living in the western world, it was inevitable that I let the western culture influence me. But I let it do more than that. I let it assimilate me.

Omaima Ahmed, a Kingston born Libyan-Canadian and Ottawa University student grew up feeling the same way. “I didn’t really have any Libyan friends growing up, there wasn’t a huge Arab community in Kingston,” says Ahmed.

Ahmed said that she avoided befriending Arabs and Muslims. “I just wanted to fit in at school, I didn’t want to be ‘the Arab girl.'” When Ahmed was 15 years old, her and her family moved to Bayda, Libya for four years. “I was nervous about moving to Libya, I didn’t know what to expect. Especially with the uprising at the time, I was hesitant.”

Ahmed wasn’t happy with the decision her parents had made at the time. “I hated it at first,” she says. As months passed by, Ahmed began to warm up to the Arab culture and everyday life in Libya. “I went to school and became fluent in Arabic. I learned to read and write and also cook. I wouldn’t have known how to do any of these things if I had stayed in Kingston my whole life.”

Now living in Ottawa, and more proud than ever, Ahmed’s life and culture seems to be constantly changing. “I was a different person in Kingston than I was in Libya, and now in Ottawa, this is the most comfortable I’ve been in a while,” says Ahmed.

“Moving to Libya and then coming back to Canada actually brought my family and I closer,” said Ahmed. “I got to go back to where my parents grew up, and I was able to understand them on a deeper level after living the way they did.”

As I grow up I see the importance and responsibility that a first-generation immigrant holds. My parents moved across the world to Canada without really having any knowledge on what life was like here. They could have moved to any other country around the Middle East that wasn’t war torn but they wanted something different for my siblings and I.

They not only saw Canada as a safe haven against the backdrop of oppressive government, they also saw it as a land of opportunity. My parents didn’t want to leave their home and everything they’ve ever known behind, but it was one of the many huge sacrifices they felt was necessary in order to give us a safer and more successful life.

They started from scratch so we wouldn’t have to. All of this has made me realize that we are the thread in between our hyphenated culture. We are also the translation from the past generation to the next generation. The traditions and customs that come with being of dual cultures is only something the in between generation can transcribe.

Thiago Rodriguez, a Carleton University engineering student, moved to Canada from Ecuador when he was only four months old. “It’s weird because I have family in Ecuador, but I never went back there,” he says. “I learned how to speak Spanish from hearing my parents communicate.”

Although Rodriguez considers himself Latino, he says that he constantly has disagreements with his parents regarding how he lives his life. “We grew up in different ways. That’s it. Our lives growing up aren’t similar at all,” says Rodriguez. “They built my life for me and they brought my sister and I to Canada for a different life, but I guess some things are just too foreign to them.”

Social, political and cultural differences and disagreements are something I have with both of my parents. However, I consider it a privilege to be a part of two fairly opposite cultures. I’m able to look at the world in different perspectives. I’m also able to adopt pros from each culture and adapt them into my life.

Residing in between both cultures will always be confusing. I think I’m always going to go through phases where I’m not enough of one or the other. Finding a balance and a stability isn’t as much a priority to me as just being proud of and participating in each is.

I don’t mind mixing and meshing each culture. You can see it in the music I listen to, the food I eat and the clothes I wear. I will always be both. Just because I love poutine doesn’t mean I don’t love my Mom’s dolma. I don’t want my cultures to have to compete to find a happy medium. If I’m feeling more Arab than I am Canadian one day, and vice versa, I’m fine with that.

The idea of not being enough for either one of my cultures, is something I no longer want to think about. I don’t want a barrier in my identity. I enjoy having a history, a language, a nuance to hold onto. Both of my cultures have enriched my life. And I learned that nothing good came out of trying to conform for either side.

I think the evolving identity of a first-generation immigrant is so unique and intriguing and I’ve reached a point in my life where I’m proud of the struggle of being in between.