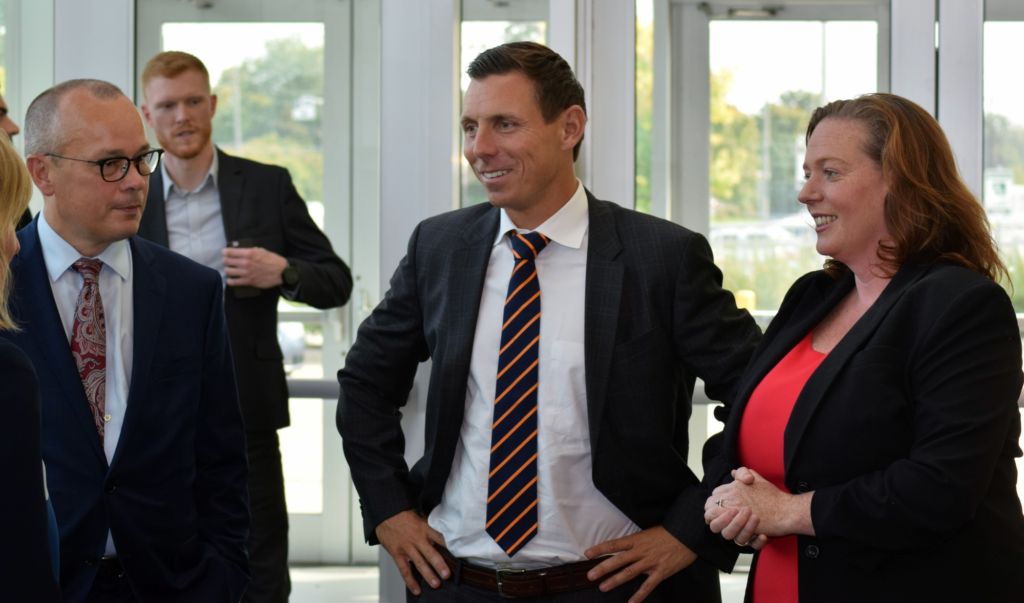 When Patrick Brown campaigned for Barrie city council at the age of 22, the first door he knocked on was slammed in his face.

“You’re too young,” he recalled people telling him. But he didn’t quit and was elected in 2000.

Brown, now 39 and leader of the Ontario Progressive Conservatives, recalled the story to encourage students to get involved politically during a visit to Algonquin College on Sept. 15 — U.N. International Day of Democracy.

Brown held a Q and A session with students for about 20 minutes in the ACCE-building’s Minto Hall, discussing topics ranging from student aid to job opportunities.

“I want to continue to grow our student assistance,” Brown said in response to a question about OSAP. He said students need more resources to break down barriers to education, including for the new OSAP program implemented by the Liberal government.

“There wasn’t much new money put into it,” he said. “It was just a repackaging.”

If his party were in government, Brown said they would focus on getting more students towards available jobs.

“Last year we graduated 9,000 teachers for 5,000 teaching positions,” he said, as an example. “We graduate young people into jobs that do not exist.”

He would also cut red tape at Queen’s Park so colleges and universities could more quickly add new course content to adapt to changing conditions, he said.

“I want our province to be as agile as possible,” he said.

Brown was the latest in a string of recent visits by politicians to Algonquin – including a tour he took of the Pembroke campus in May 2016.

“It’s great that all of these politicians are visiting,” said Victoria Ventura, president of the Students’ Association, who moderated the Q&A. “It’s important to listen to ideas.”

One of the SA’s priorities this year is fostering student political engagement so it’s helpful to have politicians come and engage, she said.

Students are in good hands regardless of how the 2018 Ontario general election turns out, she said.

“I think regardless of political affiliation the government (of the day) is willing to work with colleges (and students’ associations),” she said.

“One of the things I disliked about our political process is everyone’s in these political silos,” Brown said.

He’s supported ideas from Liberal and NDP politicians in the past because they made sense, not because of the party they came from.

“I don’t think we need to put partisan blinders on,” he said.