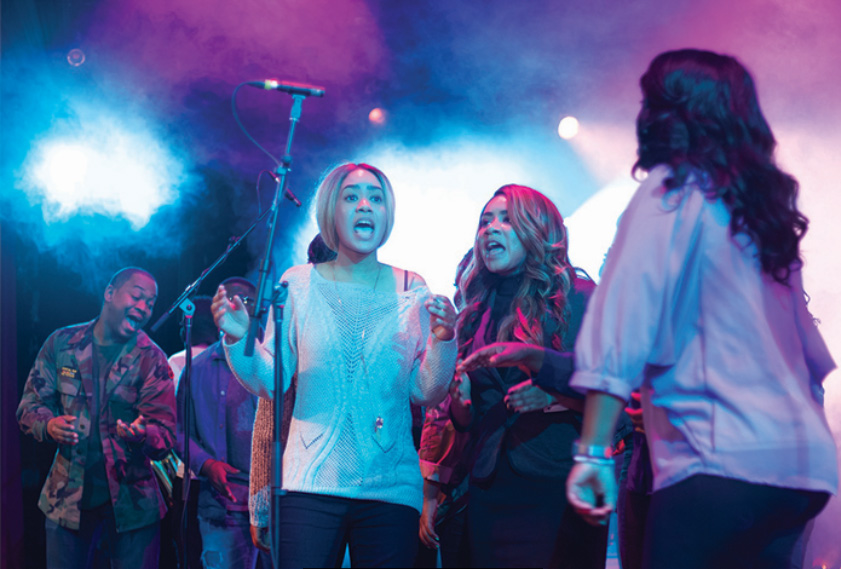 It’s dark in the Kailash Mital Theatre at Carleton University. There’s music playing faintly in the background. The strobe lights are going. The fog machine starts. The lights hit the stage and then the faces of the excited young people in the audience. The curtain is drawn and the performers come out. Everyone goes crazy as the music starts. The crowd starts singing along.

It’s actually a church service called Campus Rush. Founded at Carleton University in 2014 by student and pastor Kofi Dartey, the non-denominational group has grown from 12 members to over 400 in just two years. The group’s mission is to provide a place where millennials can explore their faith in creative ways. For instance, aside from their weekly gatherings on Thursday nights in the theatre, group members blog, cook or explore fashion together. Dartey, 22, the son of a pastor, grew up surrounded by Christian culture, but never really took it seriously. Then, during a hospital stay in 2014, he opened his heart to God and says he told him to start a church on his university campus.

“We can express ourselves and glorify God without being judged.” -Tamara Agette-Cherry, University of Ottawa student

“There are many ways in which God speaks to people,” he says. “Through others, through scripture, through spiritual intuition, and in his audible voice.” In his case, it was the latter. “I heard a voice speak into my ear,” he says.
Today, two years later, the church has changed the lives of many Ottawa students. Petra Amoako, Carleton student and Campus Rush member, is one of them.

“Just imagine a bubble that is silent inside, and outside of it, there’s so much noise,” Amoako says. “Campus Rush is that bubble to me. It is a refuge from the world. Throughout the week, I’m so busy running around for my program, bombarded with so many things and Campus Rush is just a place of peace for me. Nothing else matters when I’m there. I tune everything out. It is my escape and my safe haven.”

Amoako, a poet, is part of the church’s blogging ministry where she writes poems and blog entries.

“I feel that what makes Campus Rush distinct is that it is unorthodox. It is not your usual organ-playing, melodramatic hymns being sung, formal church,” she says. “Campus Rush is fully operated by a team of youth who are severely on fire for God and that is something you do not normally see.”

Through various forms of art, members collaborate with other creative people and search for their spiritual purpose. Dartey, for instance, is also a musician. He works with a team to write and produce music. They have released four albums and have also started a clothing line.

Tamara Agette-Cherry, a student at the University of Ottawa who is a member of the
evangelism ministry, likes that members can get involved in different ways. “It’s helped me grow spiritually in ways I never thought I could,” she says.

She was invited by a friend while going through a rough patch.

“I loved seeing others going through a similar situation with an amazing outcome,” says Cherry. “It’s a place where youth can be themselves and involved in different ways. We can express ourselves and glorify God without being judged.”

According to Christianitytoday.com, 59 per cent of Christian-raised youth walk away from church in their teen years. There has been a religious decline amongst youth worldwide because of this. In the last decade there has been a 10 per cent increase in the number of millennials who don’t go to church. Campus Rush defeats the stats. Dartey describes this phenomenon as a revival.

“Young people willingly coming out on a weekly basis, to church,” he says. “It’s not normal. It’s not something you see happen everywhere.” However, he says there is a need for Christian groups on campuses. “With all the things happening in society, we need some sort of light.”

The ministry has even gained international recognition from Christian celebrities. For instance, Dartey was contacted by Onterio Green, youth pastor of the Potter’s House, a megachurch in Dallas with a worldwide following.
Dartey encourages other Ottawa students to involve themselves in the ministry.

“You don’t want to have missed out on something happening in your backyard,” he says. “You want to be able to say you were part of what happened here in Ottawa.”