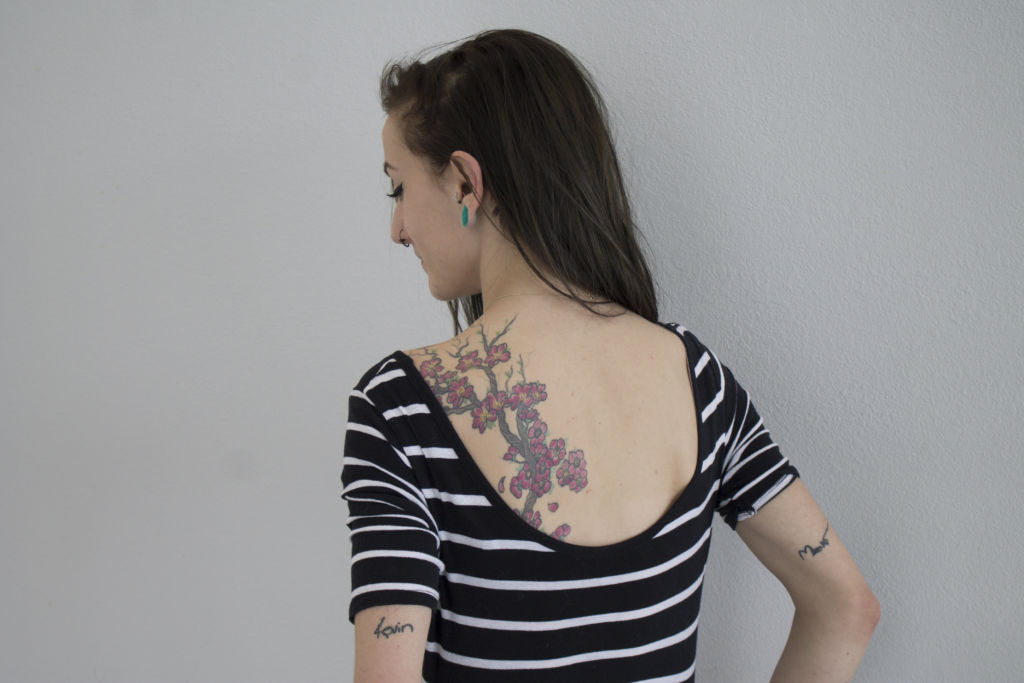 When people commit to a tattoo, they think they will love it forever. The truth is, people are always changing – but body art doesn’t. Should we expect tattoos to permanently hold the same meaning?

The first thing people notice about me is my neck tattoo. I like to call it my “neck tat.” The phrase conjures up images of a wobbly stick-and-poke Sailor Jerry knife, or a coiled serpent wrapping from clavicle to ear with the date of the death of a loved one emblazoning that quite visible and quite vulnerable area. I wear blouses and skirts every day, I drink coffee with two hands, I like books more than people and I pet cats as a hobby. In fact, my neck tat is a small dainty heart at the base of my throat – visible to all, but certainly not offensive. It gathers attention though. It is bold. And it is definitely a conversation-starter. About twice daily a stranger compliments my tattoo, asking me within the same sentence if it hurt. Then, from time to time, they ask the only reasonable next question: do I regret it yet? I invariably tell them “no” with an outward smile, and a laugh, but through gritted teeth. The real answer is both yes and no. Because just like the delicate lines of a tattoo that fades with exposure to sunlight, weather, and the passing of time – and turns a little green in the process – so too does the passion and meaning, the enthusiasm and purpose of body art, even despite the permanence. In fact, probably (mostly) just because of the permanence.

Tony Paraskevas, a pastoral caregiving student at Concodia University whose current career is in sales, regrets a few of his largest tattoos. For him, the original meaning behind the imagery he chose has changed. He put a lot of thought and meaning into the ink he got – a sleeve of different Christian symbolism. A Mary. A lock and key for Jesus Christ. Some scripture. He thought his worldview, and the philosophy and beliefs he lived by would not change.

“I’ve always been concerned with truth and the meaning of life,” says Paraskevas.  When he was a late teen and early adult, the Christian myth captured his imagination, and although he says he was pious, he considered his faith as resting on reason.

“I delved into theology and philosophy,” says Paraskevas. “I was certainly capable of considering alternate points of view. I saw myself as a humble searcher and servant.” But over time, as his convictions and priorities shifted focus, he came to see faith more as a scaffold than an absolute answer to ultimate questions.

“It held up certain values,” says Paraskevas. “But eventually I could stand up on my own.” Looking back he sees that he was wrestling with two alternatives.

“Either there was objective morality and meaning to existence, or there was not,” says Paraskevas. He couldn’t stomach the latter so the former found its expression in the most plausible theistic worldview, he says. And he had no doubts going into the tattoo in the beginning.

“I thought I’d be faithful for life,” says Paraskevas. “I was certain.” He held on for as long as he could. After a few years of suspended disbelief and cognitive dissonance, he put his theism to rest. But the tattoos are still there to serve as a reminder, even if they don’t hold the same meaning to him any more. While they used to be something of a compass to remind him daily of his belief system through Christian myth and the hope for objectivity, they are now simply souvenirs of a quest he went through and a sign of his growth along the way.

A former Algonquin College massage therapy student also regrets some of her tattoos. Although Raven Barr’s inks of shame were not meant to be representative of her religion, they did have a meaning she went in with initially. By external forces outside of her control – in one case shoddy craftsmanship and in the other case, simply put: time – the meaning she wanted the body art to portray was diluted by embarrassing visuals.

“My second one was supposed to have so much meaning,” Barr remembers. The quote was, “But the fighter still remains.” She says the tattoo artist knew her story behind it and wanted to give it to her for free. It was her first time getting ink from this artist, so she made a joke.

“Don’t screw it up,” she said to him. It was almost like a prophecy. “It wasn’t until I took the bandage off that I saw the line work was so thick that you could hardly read the word ‘remains,’” says Barr. When you could finally make out the word, as the ink settled, she could see it clearly says ‘remsins’. A spelling error, an S instead of an A, in the middle of a word.

“I regret this obviously because it’s not as meaningful as it was prior to having it permanently on me,” says Barr. It doesn’t end there though for her. Barr has another tattoo she’s unhappy with.

“My last one is still my absolute favourite tattoo I have,” she says, “but I still wish it could have been better.” She doesn’t see it because it’s on her back, so it doesn’t bother her too much unless she is looking in the mirror behind her. Then she just “judges it.” Her whole back piece began when she was 18 years old and it was just one cherry blossom tree branch on her shoulder. She said she loved it and had an amazing artist. When she was ready to add on to it a year and a half later, she went to the same artist of course.

“We started tattooing and mid-way into the process she told me that her prices had raised so I had to stop with an unfinished back piece,” says Barr. “She kept telling me ‘I need to finish this one more detail,’ and eventually I told her I had to stop because I couldn’t afford to keep going.” She does love it but she can see how the artist’s style and talent changed within the year. The flowers she got on the initial cherry blossom branch are completely different from the rest.

“It’s almost as if the tree grew different flowers at the top,” Barr said. “I just wish it was exactly perfect, especially with the amount of time and money that’s been invested.” The thing about tattoos is that they are permanent – but not much else is. The world spins, skin wrinkles, your religion changes, and tattoos fade. External forces will get you, whether it is an amateur artist holding a tattoo gun for his first time who mistook an S for an A, or the sun that causes ink to fade. Time passes and with it the leaves of the trees change, the things you thought you’d love forever stop being so lovely and you take new shapes that change the way your tattoos look or mean.

Jesse James, a 26-year-old tattoo artist who has lived in Ottawa his whole life and works at Planet Ink Studios, says that he hears about tattoo regret “essentially every day.” He does maybe a handful of cover-ups a month but daily he hears from customers who mention they regret a tattoo, are reworking something they already have or that they’ve outgrown their ink. James chalks up tattoo regret to two main reasons.

“They either got it when they were much younger and it’s aged and doesn’t look how it used to,” says James, “or they cheaped-out, getting it done in a basement somewhere, or someone’s house, and they ended up with something that was not done professionally which you can see clearly.” Despite all this, why do we, silly young adults that we are, continue to commit to permanent drawings on our body? How is it that we can commit to forever with a needle and ink, but have so much difficulty to commit to one college program, one career, one romantic partner, or one apartment?

“There is an outside influence,” says James. “Whether it is friends getting tattoos or people just growing up wanting them, when they reach the legal age and realize how expensive they are, they tend to take the cheaper route. That’s the most common reason I hear.” In other words, we try to cut corners for a quick reward, but it would have been smarter and less pricey to just get it done properly the first time around. Sounds reasonable. Perhaps the wisest choice then, would be to make sure to commit to the other adult decisions first – before the tattoos. At least decisions like schooling and careers would help with the financial element, which James says is the most popular reason for tattoo regret.

But do we really want to be wise about tattoos? That seems antithetical to what a tattoo is, has been and likely will continue to be. An act of rebellion. An act of community. A sacred symbol to fetch spiritual power, protection and strength. A tribal stamp to showcase your identity, your heritage, your kin and brethren. From sailors to prisoners, from East to West, back centuries and centuries to the first people who first thought to make a mark in solidarity or in solitude. It’s cults, it’s family, it’s culture. A wearing of your own voice, even as it changes. In short, a rite of passage. Sometimes we just pass them right by on the way and they become just a souvenir of those rites.

Do I wish I had a neck that was without mark or geometrical shape inked in with a gun? Of course, sometimes. It would be nice to go to a wedding or an interview and not have to wear a neckerchief so as to avoid judgment or be considered a gang member by elders. It would be cool to not be “someone with a neck tat” on those very rare occasions where I want to not be “someone with a neck tat.” I’m fortunate that since it is such a universal symbol, it’s meaning can be vague and fluid. I think up a new answer every few years about what I want to reply when someone asks me what it means. It’s not tattoos that we regret – not the image, or the risk, or the actual art of it – just the meanings we attribute to them and how their failures and imperfections can remind us of the lack of meaning we find in other places outside of the body.