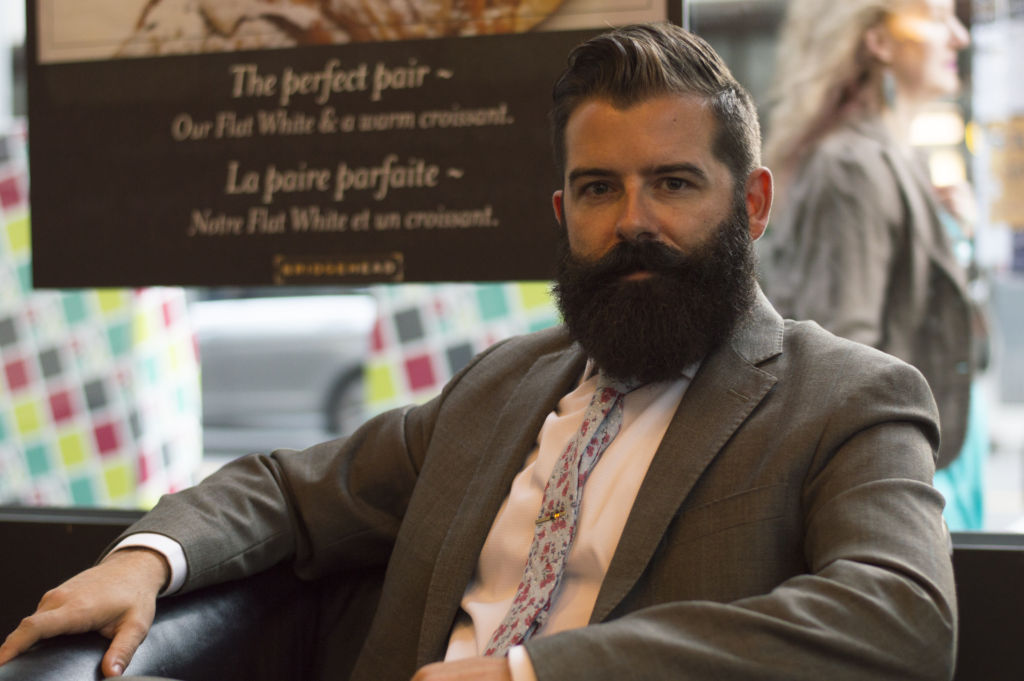 Jonas Langille started growing his beard three years ago. At the time, he thought having a beard would save him time while getting ready, but it quickly turned into a full morning routine.
Photo by: Glenn Harrop

Tomorrow morning most men will have an appointment with their razors, but for others, their razors are gathering dust. Men who retired their razors are constantly battling between being compared to either hipsters or hobos, and they must groom their facial hair accordingly. Men try to tame their facial hair for a number of reasons and – for young men especially – it can be a challenge. Sometimes the hair will grow in patchy or maybe it won’t grow in at all. The same thing can be said about a number of other insecurities that men may face, and a beard won’t change that.

The inability to pull off the mountain man look might not seem like a big deal, but to some it could be an insecurity. They may feel like they are missing out on an aspect of masculinity, or that they’ll never compare to those with beards. A common insecurity for men is their height, something that becomes more apparent as a man enters adulthood.

Jordan Linton, a third-year physics students at Carleton University, feels that his beard gave him confidence to overcome his own insecurities. At age 22 Linton is 5’6” but he also has a glorious beard which he says makes him look three years older.

“A lot of my peers are in their mid-twenties and being on the lower end of that age range I almost feel like I’m the height of a child,” says Linton. Before Linton grew his beard, he dated a girl who preferred clean-shaven men. After they broke up, he decided to grow his facial hair out almost immediately. Previously, his only motivator to shave was his girlfriend but without her he could do whatever he pleased. Linton says the beard makes him feel like his actual age and more like an adult. Even though his beard makes him feel “more complete as a man,” he thinks men who cannot grow facial hair shouldn’t feel insecure or less masculine.

“I’ve always been shorter than most guys so I’ve always been reminded and bullied because of it. I wouldn’t want to do the same kind of thing to a guy just because he doesn’t have a beard,” says Linton.

Another dapper fellow who retired his razor is Jonas Langille, a 35 year-old program coordinator for the federal government. Langille has had an on-again-off-again relationship with his facial hair ever since he could grow it. And with hairstylists in the family, he knows his hair. Langille’s beard has been recognized by the illustrious community of /r/Beards on Reddit. Upon winning the subreddit’s bimonthly beard competition he received a gift basket full of facial hair care products and the accolades from his online bearded brethren. Langille has had his beard in its current state for three years and he says that his facial hair gets compliments in more places than just the internet.

“Just last year I was walking down Bank Street and these four bros in a black Acura just pulled over and said, ‘Sick beard, bro!’” Langille says that women tend to comment more on how well-groomed his facial hair is, but men are more likely to marvel at its size. When Langille groomed his beard to a respectable condition, he committed to it and the work that comes with it.

Initially, he thought his facial hair would save him time in the morning, but he quickly found that this wasn’t the case. Langille now has a full morning routine to maintain his beard including conditioning, oiling, waxing and even blow drying his beard to make sure it stays in tip-top shape. Although his routine does take him more time to get ready, he says it’s no different than maintaining the hair on top of your head. He says that if you want to look good you need to put time and effort into it – no matter where the hair is on your body.

“In a new age where there is this resurgence of beards and men are redefining or trying to redefine their gender traits,” he says. “I think beards might be part of that conversation.” He believes that even though some men cannot grow their own beard, “It’s a grass-is-always greener type of situation.” If a man struggles with his facial hair, it is just a sign of insecurity that a bearded man may also have but manifests in a different form. Langille says he would only consider shaving his beard out of necessity or if his significant other felt it had gone too far.

In the case of Bryton Swan, a third-year humanities major at Carleton University, he enjoys his beard too much to imagine his life without it. His girlfriend, Sarah Newman, is a third-year journalism student at Carleton and as much as she enjoys his beard, she wishes he would take better care of it. Despite this, he’s still confident she’d rather him have a wild beard than nothing at all. “I think she would be pretty distraught if I shaved it,” says Swan. Swan says that even if his beard might make him look more masculine, he tries not to think of it that way.

“I know he might not say it, but his beard makes him look very masculine, and more attractive. And I really prefer him with it,” says Newman. While Swan now has fun growing and maintaining his own beard, there are people who devote their lives to the hair of other men. And in Ottawa these are our noble barbers, like 27-year-old Ankur Vadhera of Capital Barber Shop on Bank Street.

Vadhera is the co-owner of Capital. He’s been cutting men’s hair since he was 15 years old and he’s been growing his beard for nearly as long. After over a decade of meticulously growing and sculpting hair, he sees masculinity in a more ‘laissez-faire’ attitude. “If it fits your style and your persona, keep it. But if it doesn’t, don’t be afraid to try something that works,” says Vadhera. His beard fits his style and sometimes it gives him confidence as a professional as well. “People tend to judge if you’re running your own business when you’re young and the beard makes me look a little older, and feel a little older,” says Vadhera. Although he enjoys his beard he also sees the benefit of growing one to show the quality of his craft. He says that as a barber he’s expected to keep up his appearance and his facial hair is all part of the package.

Another barber you may know in Ottawa is Milan Arsenault-Verrelli of Hair Fellas on Wellington Street. Arsenault-Verrelli is the supervisor at Hair Fellas and after he completed his sociology degree at Carleton he decided to go into barbering instead. What started out as a way to make a few bucks on the side turned into a full-fledged career. Arsenault-Verrelli describes a beard as potential “safety blanket” for men with insecurities – a way for men to feel more secure in their masculinity through their appearance. Regardless, Arsenault-Verrelli doesn’t think there’s anything wrong with a man not growing a beard or forgoing any typical expressions of masculinity.

“I definitely think we live in an era where there’s an amalgamation of these new and old styles so men are trying to redefine themselves,” says Arsenault-Verrelli. He encourages other men to accept their appearance, but recognizes that a beard can be pivotal. He says he is perfectly aware of his own insecurities and that his hair is just one of the ways he deals with them.

For a man, the ability to grow a beard is more than just a relic of our days in the state of nature. It’s also an aspect of our gender and self-image. Maybe some men won’t be able to grow a beard, but that doesn’t matter, because even the men with beards will have the same kinds of insecurities as anyone else. Some men might grow their facial hair, work out, throw around the old pigskin or grill excessive amounts of meat. However they choose to, young men express their masculinity in their own ways regardless of where their hair grows. The only real difference between the two is their budget for hair care products.