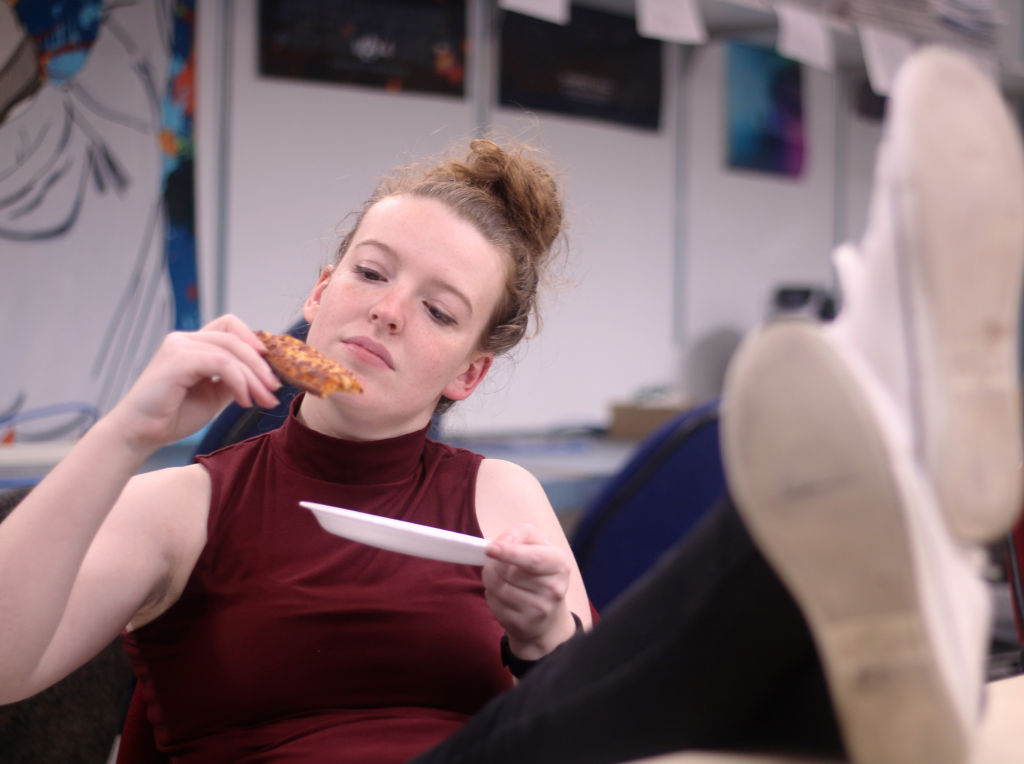 My love affair with pizza didn't start until I was 18 years old, when a pizza chain first introduced gluten-free crust. Now, my friends know me to be a bit pizza-obsessed.
Photo by: Glenn Harrop

May is Celiac Disease Awareness Month. So what is it actually like to live with celiac on a daily basis? Glue contributor Sarah Ferguson, 25, was diagnosed when she was two years old and gives a first-hand account of the impact that the auto-immune disorder has.

The first time I ate pizza, I was 18 years old.

As I waited, I was full of excitement combined with a slice of nervousness, worried that despite the “gluten-free crust” label on the menu, it wouldn’t be truly gluten-free and I would end up sick.

The pizza delivered, and I was left wondering, “Where has this been all my life?”

This was probably one of the few times I ever felt like I had been missing out. I had sat through countless birthday and pizza parties through the years and watched as everyone else got to enjoy the cheesy deliciousness. It had never really bothered me – and I had never really felt excluded – because it was simply a fact of my life that I couldn’t eat it.

I was diagnosed with celiac disease when I was two years old, and I’ve been on a strict gluten-free diet for 23 years since then. This revelation is typically met with a look of pity and a “that sucks, how do you survive without (insert gluten-containing item here)?”

In all honesty, it doesn’t feel abnormal to me. It’s not that I didn’t realize that the food I ate was different from what everyone else was eating.

I was fortunate enough to be diagnosed at such a young age that I didn’t have to make a huge transition to a gluten-free diet. I never had the opportunity to develop a taste for “regular” food so I don’t miss it. It’s a lot more difficult to be told to avoid gluten once your eating habits have already been established.

I may have missed out on Oreos, but at least I don’t spend every day missing the taste of them.

Stephanie Gagnon, 19, was diagnosed in August 2015, a mere three days before she moved away from home in Kingston to start university at McMaster. For her, the transition was difficult.

“It’s not easy to be told you’ve been eating this (gluten) all your life and now you can’t anymore,” she says.

Her speedy diagnosis prior to leaving did not leave a lot of time to adjust to her new diet before also having to make the leap into post-secondary life. She didn’t have the chance to reach out to the school in advance or make any meal plans, and found that there weren’t a lot of options available in the cafeterias.

“It’s frustrating eating the same thing all the time, and not being able to try everything,” says Gagnon.

Cake is the one food that she finds herself missing. She hasn’t been able to find a place where she can just pick up a gluten-free slice.

My mom holding me at age two, not long before I was diagnosed.

I was fortunate that as I grew up, my parents worked hard to make sure I didn’t go without treats for celebrations. On a trip to visit family in England that included celebrating my birthday, so my mom, Kathleen Ferguson, carried all the dry ingredients for two gluten-free cakes in her suitcase.

“I wasn’t sure they would have the right flour mix and we wanted to make sure there was a cake you could eat,” she says.

My family was living in England when I was two years old and first became symptomatic. My legs were incredibly skinny and my stomach was bloated. It was at the barbecue held days before we returned to Canada that they realized something was seriously wrong.

“You ate three great big bowls of cereal in the morning, a big steak, a hamburger and a sausage,” Ferguson explains. “And you kept asking for something else to eat. That’s when we really started thinking ‘oh my god, there’s definitely something wrong with this kid.’”

Upon our return to Canada, my parents took me to the family doctor who, as my mother explained, stopped dead in the doorway and said “that’s one sick child,” when he saw me.

Within a week, I had undergone blood tests and a biopsy and received the results: I had celiac disease. The good news was that I could be healthy by following a strict gluten-free diet.

What is celiac disease?

It is estimated that one out of every 133 Canadians are affected by celiac disease, according to the Canadian Celiac Association.

Celiac is a life-long autoimmune condition for which there is no cure. When someone with celiac eats something containing gluten, the surface that absorbs nutrients in the small intestine is damaged by the person’s own immune system as it reacts to the gluten.

Gluten is not simply wheat products and not all wheat-free products are gluten-free. Gluten is a protein contained in wheat, rye and barley. Most people with celiac also avoid oats unless they are specifically labelled as gluten-free because of the high possibility of them being cross-contaminated.

So, what really happens when someone with celiac disease eats gluten-containing products? The symptoms – mostly intestinal, but there are some mental ones as well – indicate an inability to absorb nutrients. The symptoms include abdominal pain, bloating, diarrhea, vomiting, weight loss, fatigue, irritability and mental fog.

I was malnourished and I hadn’t grown in over six months when I was diagnosed. Since then, I’ve avoided gluten like the plague, and I have been able to live a regular, healthy life.

Gagnon found that her symptoms had not completely gone away even eight months after diagnosis as her intestinal system was still recovering.

The long-term digestive damage is the major defining difference between celiac disease and gluten intolerance. While there is no actual test for a gluten intolerance, it is a legitimate health concern that can also be made better with a gluten-free diet.

One of the major keys to making this transition smoother is finding substitutions for the things the person can no longer eat so that they are still eating as normally as is possible.

Because of my age when I was diagnosed, it was my parents who visited a dietitian and were faced with this major learning experience. A big chunk of this process, my mom says, they did on their own. The chapter of the Canadian Celiac Association that included Kingston was not helpful, which she attributes to the fact that I was a child and she didn’t have celiac herself.

“I had to do the research myself, like finding out what kind of Halloween candy was safe,” she says.

The knowledge that my parents gathered, they passed on to me throughout my life. Checking the ingredients on labels has become second nature, so I’m confident in my own ability to avoid products that could make me sick. When Gagnon went shopping for the first time after diagnosis, she called me and asked me to tag along. How could I say no, knowing how difficult it could be even with years of experience?

We walked up and down every aisle of the grocery story as I pointed out the products and brands that I personally liked best. She would ask questions about whether certain foods were gluten-free, and we combed over the ingredients together. Sometimes I would offer a suggestion for substitution.

“Shopping with someone helped make the transition a lot easier,” says Gagnon. “It was less scary knowing that I wasn’t alone and that you can feel better after a while.”

The world is catching up – more options

The hardest part for me is eating somewhere new, whether it’s a friend’s house, a café or a restaurant. That’s when a bit of paranoia tends to set in.

When I was a kid, an extremely limited number of restaurants had even one gluten-free option or even knew what gluten was. Even fewer had gluten-free options for children. If my family went out to eat, my parents brought a meal for me with them in a plastic container.

As I’ve grown up, I’ve noticed restaurants becoming more gluten-aware. In my teenage years, I could usually ask and the staff would be able to make something safe for me to eat. This something was usually steak. There was one occasion that my soccer team had made the trip from Kingston to Ottawa. We went out for dinner as a team at East Side Mario’s and while all of my teammates were eating their pasta, I was chowing down on my steak. I remember one of the girls saying, “You’re so lucky, you can order the expensive meat and your parents can’t get mad at you for it.”

Now, almost all have an allergen menu and some even have dedicated gluten-free items. I like to know these things in advance. Few things make me as anxious as when someone suggests an improptu stop to a new eatery to “try it out.” I want to be able to do my background research on the place and have an idea of whether I can eat anything there, before I actually get there. My friends are understanding of that and always ask “can you eat there?” before we actually make a decision.

And sometimes, if the answer is no, I’ll just sneak some snacks in with me.