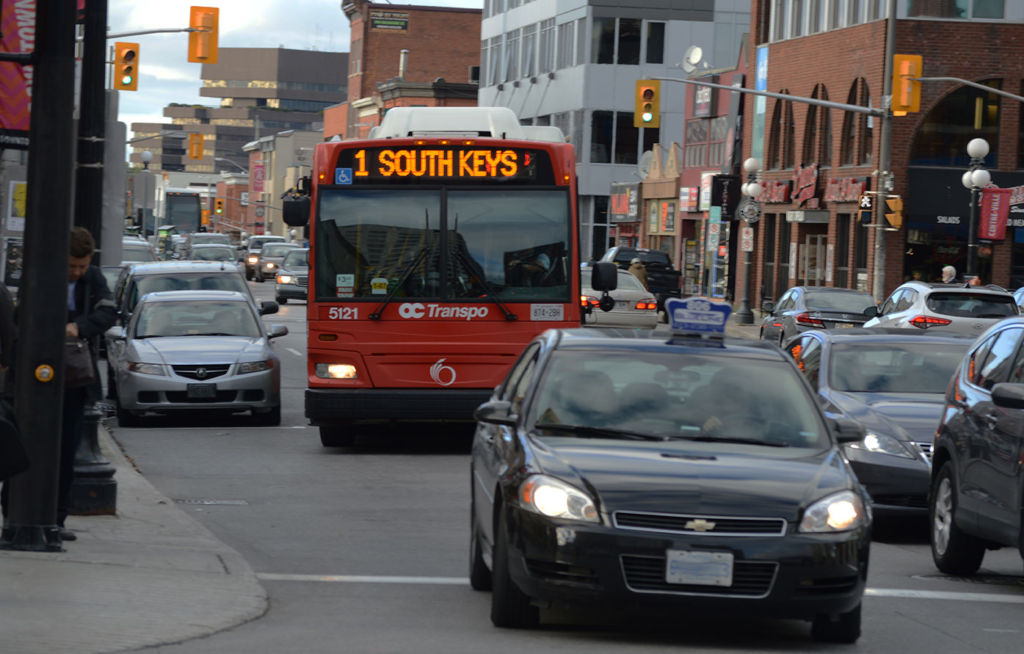 In Ottawa, complaining about OC Transpo is what brings people together. From late buses to confusing route changes, the city’s public transit service gets a lot of flak. However, some of the worst parts about Ottawa’s buses are the people who ride them.

Glue asked students about the worst passengers they’ve had to ride with, and we’ve developed a list of ways to avoid being that annoying person on the bus.

Whatever you bring with you on the bus – maybe a backpack, or a skateboard, or a grocery bag – didn’t pay its own fare, so it shouldn’t be entitled to having its own seat over an actual paying rider.

“(I) was on the 95 which was packed full of people like a can of sardines, and this one lady had a seat to herself and on the seat next to her she had a pie on the seat, taking it up so no one else could sit there,” says Alex Klaus from Algonquin College.

Kirstin Burns, who plans to take early childhood education at Algonquin College, finds that high school students are often guilty of taking up too much space on the bus. “I saw a kid laying across five seats,” she says.

2) Get up from your seat at the right time.

We’ve all been there: you have a window seat and you have to get off the bus, and you need the person sitting next to you to move, but it’s just too awkward to communicate that. As long as you get up the right time, most of that awkwardness disappears. Don’t ask the person next to you to move while the bus is making a sharp turn. Instead, wait for the bus to stop, or at least get up while the bus is moving down a straight road at a steady pace.

3) Don’t stand at the front of the bus while people are trying to get on.

It shouldn’t take more than five seconds to pour your fare in the coin slot, or show the bus driver your pass – and even if the Presto machine is acting up, you shouldn’t be holding up the line of people trying to get on the bus. Christopher Mancuso, who takes computer science and engineering technology at Algonquin College, recalls a particularly annoying time when two passengers held up the line.
“They kept talking while the people getting on the bus piled up near the driver,” he says. “Finally (I) had enough, got up and told them to move.”

4) Earphones exist for a reason. Use them.

It doesn’t matter how much you love the music you’re listening to. No one on the bus asked to hear it.

You’re not allowed to smoke on public transit, but some people love to break the rules. Brett Parnell, a travel and tourism student at Algonquin College, witnessed one smoker after the Super Bowl. “When everyone was trying to get home after the game, I (saw) a guy decide to light a joint as we were driving down the highway.”

Small talk is usually meant to be a friendly gesture, and while there’s nothing particularly harmful about it, it often just makes people uncomfortable. The ones who “get on the bus and immediately start talking to the first person who makes eye contact” annoy Eric Marshall, an Algonquin College student. “I’m not a big fan of the ‘whatcha reading, whatcha listening to?’ types,” he says.

The seats at the front of the bus are called Cooperative Seating, or Priority Seating. They are reserved for “persons with disabilities, seniors, persons with assistive devices, pregnant women (and) customers with small children or open strollers” according to OC Transpo’s website. If you refuse to give up a seat in Cooperative Seating for someone who falls under one of those categories, you’re not only breaking a rule, but you probably look like a jackass.

This one should be obvious, but unfortunately, there’s no line people won’t cross. Harassment occurs in many forms on public transit. “I had a guy who was very persistent trying to tell me to get a spell book to read, and that they were full of ‘white spells’ to protect me,” says former Carleton University English student Christina Rayment. Harassment can also occur in more serious forms, says Lydia Clark, an early childhood education student at Algonquin College.

“I had a guy clench his fists and stare at me for five minutes straight once,” says Clark. “I tried to stare right back at him – maybe it would make him feel uncomfortable and he’d stop – but it didn’t work. He just kept staring with his fists clenched.”

Riders who feel that they’ve witnessed harassment can make an anonymous report to OC Transpo online or call Transit Law at 613‑741‑2478.